We tackle an epic piece of tarmac in Oman in the mighty Mercedes-Benz SLS Roadster. 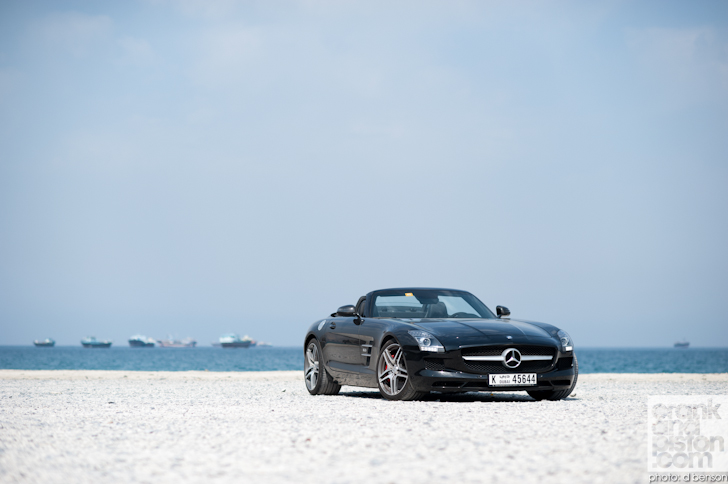 The Middle East is home to some epic roads. Sure, they might be far apart, but the likes of Jebel Haffeet, the Hatta Squiggle and the Taif Road will satisfy even the most demanding of petrolheads. But what’s the best road in the region? Arguments will rage from Yemen to Egypt I’m sure, but the best stretch of tarmac I’ve found so far is in Oman. Specifically, in Musandam, running from the border on the west coast to Khasab. It’s about 45km long, runs directly alongside the Arabian Gulf, and until today I’ve only driven it in a 2006 Volkswagen Golf 1.6. About three years ago.

A return journey has been on the cards for some time, as my original run at it – completely by chance – wasn’t really in the right kind of vehicle. I decided that my return to the Khasab Road would have to be in something worthy. 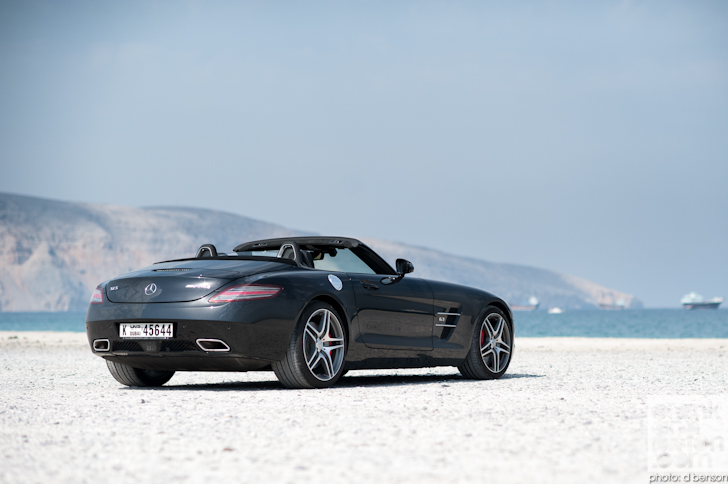 So here it is. It’s the Mercedes-Benz SLS Roadster, and it’s mine for the day. Together with photographer David, I plan to return to the road to make sure it’s as epic as I remember it. We meet early one Wednesday morning in Dubai, and I get my first proper look at the car.

This SLS isn’t the consummate showman that its coupe sibling has become. Not for the Roadster a set of look-at-me gullwing doors. True, a canvas roof doesn’t make a great mounting point for such devices, but the result of lopping off the hard top is that the SLS Roadster features regular doors and thus loses the major visual focal point of the coupe. As a result, it’s considerably more understated, especially in the Obsidian Black paint of out test car.

It’s still not exactly subtle, of course – that enormous long bonnet and chrome strakes down the side give it a dramatic edge, as does the big AMG badge to inform passers by who don’t know what lurks beneath. A 6.2-litre V8, that’s what, handmade in Affalterbach by one Steffen Hahn – and bearing his signature on it – and producing 563bhp. Potent. But it doesn’t shout about its performance potential, at least while standing still. It’s elegant and stylish, but turns fewer heads as it sits outside my apartment block than I suspect the coupe would. Is that a good thing? I am as yet undecided. 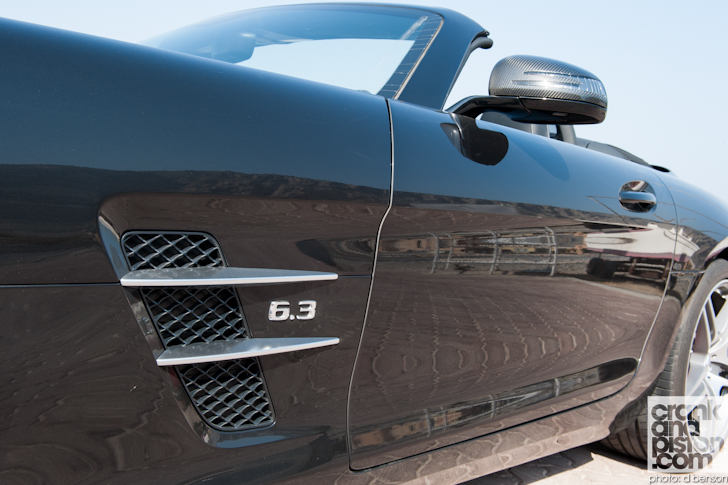 We get on the road. The boot is easily big enough for my rucksack and David’s camera bag, which is a relief as cabin space is limited. There are no rear seats and only a small storage section in the centre console. The focus is on the driving, with just enough attention to a luxury feel and comfort to ensure the driver doesn’t feel ripped off for his $212,100. Therefore there’s plenty of leather and Alcantara everywhere and some very tasty (optional) carbon fibre across the dash and centre console. The seats adjust every which way, although I wish they’d go lower. I like to sit fairly upright when I drive, and my eyes are just about level with the top of the windscreen.

The first hour of the journey is entirely on motorways as we head out of Dubai and north on the bypass road, avoiding the morning rush hour traffic. Cruise control is set to the speed limit and away we go. At this point, we’ve yet to drop the roof. It might be the Roadster’s big party piece, but even in the most refined of convertibles, an hour of top-down motorway action isn’t that appealing. So the canvas roof stays on, and it does an impressive job of keeping the outside world away from us. There’s more wind and road noise than in a folding hard-topped machine, but considering it’s essentially textiles keeping the environment away, it does an excellent job. It also means that only 40kg have been added on to the car’s weight, compared to the coupe. 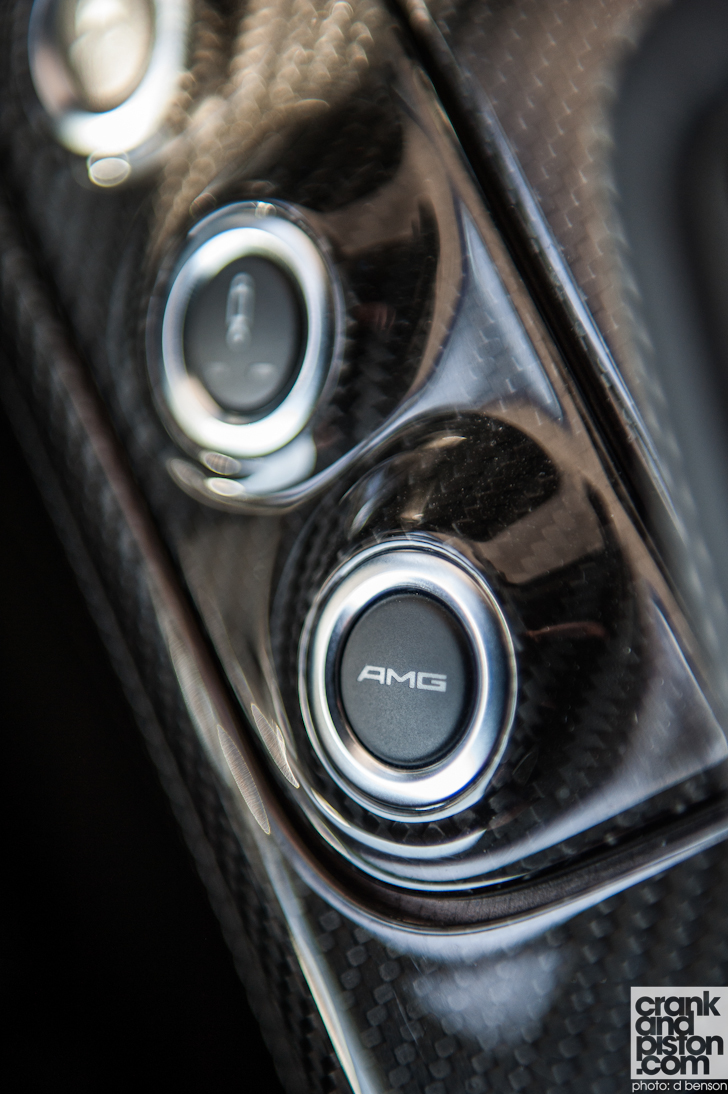 The ride quality is also superb. So far we’ve only been on well-maintained roads, but nevertheless, the SLS is built for serious performance, so a bone-shaking ride wouldn’t arrive unexpectedly. The sports suspension can be adjusted in stiffness through three settings via a button on the transmission tunnel. Although we’ve got it set to the loosest, it’s still pretty unforgiving. But while the chassis is stiff, and transmits everything going on underneath through to the occupants, it’s well damped.

So far, there have been no opportunities to really open the SLS up. Speed cameras line the road at very regular intervals, and corners are restricted to bends in the motorway. The only real excitement has been from the SLS’s exhausts. Even at around 2000rpm there’s a hard-edged growl from the exhausts, and the few flexes of right foot I’ve exercised see it grow quickly into a metallic, bass-filled bark. It resonates potential. 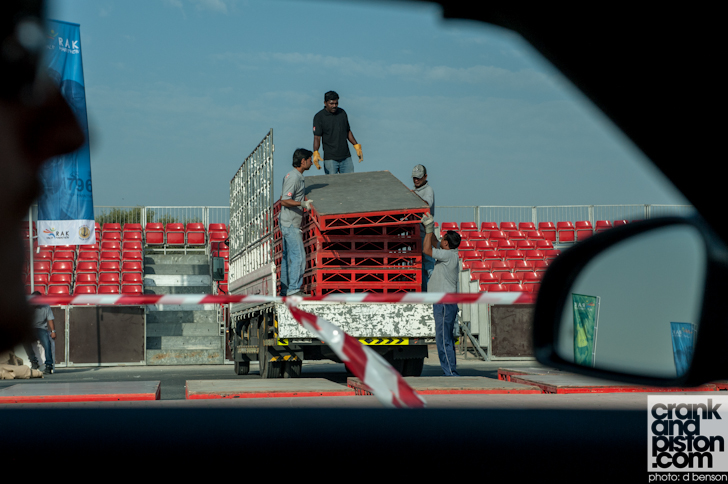 The skyscrapers and industrial outskirts of Dubai fade as we head into Sharjah emirate, the motorway now flanked by big golden sand dunes. We’ll skirt past Sharjah city and Umm Al Quwain completely, joining up with the main Emirates Road and then heading into Ras al Khaimah. From there there’s a slower journey through town and outlying villages until we reach the border. And that’s where the fun will start.

First though, we have to negotiate Ras al Khaimah city. In theory, it should be a straightforward journey following the main road, but as luck would have it, today appears to be the day when all of the roads in the city are being dug up. Consequently, we spend close to an hour following diversions and going around in circles. Clarity of detour directions, it seems, are not high on the local authority’s priority list. The good news we’ve found is that the SLS is fine around town, and doesn’t suffer from a jerky throttle as some sports cars do. We do, however, have to slow almost to a stop for the large speed bumps that infest the area.