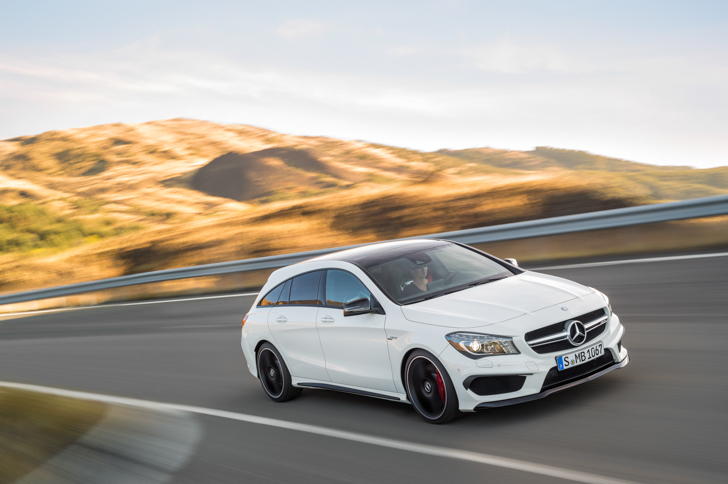 First item of business is the elongated roofline, which not only improves both head and legroom in the Shooting Brake but also offers a sizeable amount of load space: should you ever need to transport 4000 Pepsi cans in one fell swoop, the 1354 litres on offer in the rear has got you covered.

Atop the all-new tailgate is the first of several AMG hallmarks, namely the tail-lip roof spoiler (plus trailing edge, or ‘Gurney Flap’) which reduces lift at high speeds. Alongside chrome-tipped twin tailpipes and a black diffuser, Affalterbach similarly makes its presence known with a matt titanium grey radiator grille, front apron with front splitter, some cheeky five-twin spoke light-alloys. Then there’s the AMG lettering: if (for some reason) you’re unsure which model you’ve landed in, check out the fenders, the grille, AMG Drive Unit (that’s the gearbox to you and me) and the performance seats. And the tailgate. Oh, and the flat-bottomed steering wheel. And the alloys. 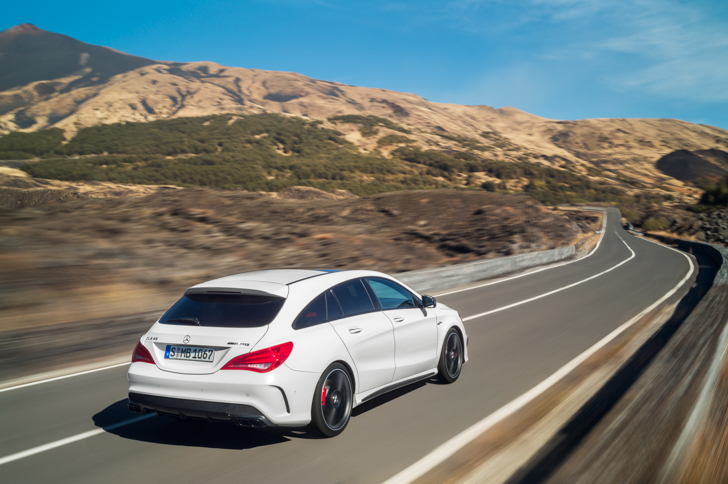 A new bodyshape though is just one of the CLA’s talking points. Like the saloon model that preceded it, the Shooting Brake has forgone AMG’s traditional ‘V’-cylindered engine and downsized to a four-cylinder with twin-scroll turbocharger. Spray-guided direct petrol injection and multiple spark ignition mean the BlueMATIC unit kicks out a not unreasonable 6.9L/100km fuel efficiency rating and reduced exhaust emissions. But it’s not all conservation and green scheme for the CLA 45, since the 1991cc unit also shares a considerable amount of tech with the 4.0-litre biturbo V8 that powers the newly launched AMG GT sports car. The four-cylinder consequently produces 360hp and 332lb ft of torque, enough for a 250kph electronically limited top speed and a 4.7-second 0-100kph time. For those of you keeping track at home, that makes the 2.0-litre turbo the world’s most powerful four-cylinder engine in series production. 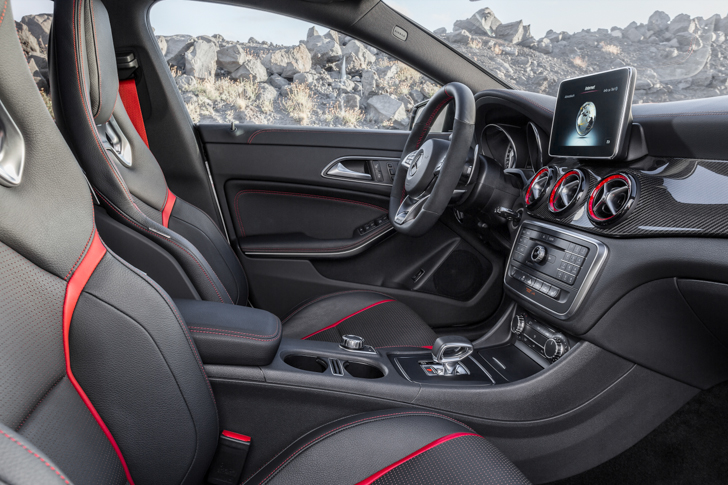 Under constant pace, the CLA 45 runs predominantly as front-wheel drive to maximise traction and negate slip through the corners. Under heavier acceleration however, torque can be split 50:50 between the axles for improved balance and increased dynamism (aided in no small part by more stiffly sprung sport suspension). It’s under such circumstances too that the AMG Sport exhaust system kicks in, the automatic exhaust flap control opening to allow the traditional AMG soundtrack to thunder through the cabin and occupants eardrums to rupture.

For the lairier, ‘seat-of-the-pants’ drivers amongst you, the AMG Speedshift DCT seven-speed transmission comes with three modes – Sport, Controlled Efficiency (that’s ‘Comfort’, to you and me) and Manual (sorry, Momentary M Mode) – as does the ESP traction control system. Beefed up brakes – vented and cross-drilled discs lurking behind those 18-inch alloy wheels – are there to help should you stiffen the upper lip and select ESP Off. 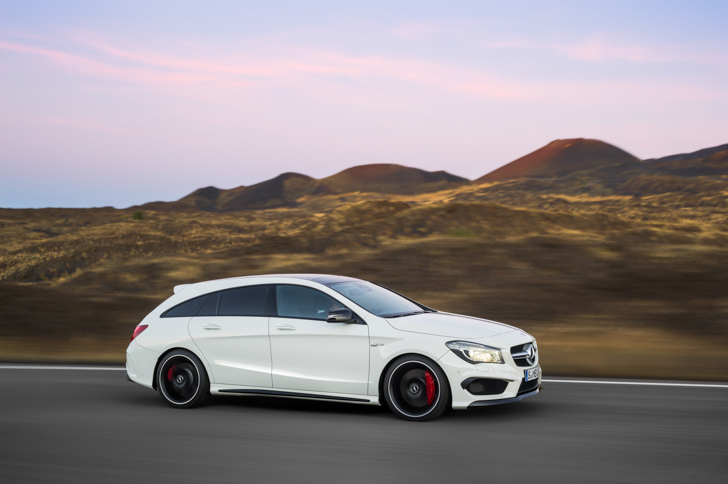 ‘All well and good’, some of you might be saying, ‘but what if I wanted a dash more colour to my new CLA 45 AMG Shooting Brake?’ Turns out Mercedes has got you covered with the limited OrangeArt Edition. This features all of the above but with a splash of orange about the radiator grille, mirrors and rear apron, as well cross-stitching on the performance seats. OrangeArt trim and matt black alloys complete the limited edition package.

We’ll see the CLA 45 AMG Shooting Brake for the first time in the metal at the Geneva Motor Show in March next year.

Previous ArticleVIDEO. F1 through the eras with Williams
Next Article VIDEO. Evolution of F1