The crankandpiston.com inbox is regularly inundated with updates about this special edition Rolls-Royce model, that limited edition paint finish or these luxury one-of-a-kind rear seat cushions. Not since the Wraith appeared on the scene has the Goodwood-based pillar of excellence offered us something new and exciting. Until now.

This is the Ghost Series II, the follow-up to the baby Roller that first made its appearance in 2009. Those of you expecting lashings of extra performance and oomph may go away a little disappointed, but those of you expecting new exterior styling and a tech-heavy newboy in the €200,000-plus car category may want to get comfortable.

Subtles changes to the Ghost include a new ‘wake channel’ on the bonnet (read grooves) evoking a jet’s vapour trail, stronger re-designed bumpers, chrome inserts in the front air intakes, and optional 21-inch forged wheels in what Rolls-Royce coins a ‘timeless yet modern quality’. On the inside, pristine leather and immaculately stitched upholstery now go hand-in-hand with new seats, chrome surrounds to the sun visors, and a new ‘soft feel’ dashboard with new dials. On the tech side of things, the new Ghost now boasts on-board WiFi and a rather nifty Spirit of Ecstasy Rotary Controller, which allows you to use the on-board infotainment system in much the same way you would a mousepad on your iMac.

Power once again comes from Rolls-Royce’s established 6.6-litre twin turbo V12 (as also found in the Wraith) which is mated to an eight-speed Satellite Aided Transmission. This rather clever system uses GPS to determine where the vehicle is in order to make sure the Ghost Series II is always in the right gear for the terrain.

Never has luxury motoring been easier. Now we sit and wait for the next ‘special edition’. Until then, Rolls-Royce has something else that might tickle your fancy… 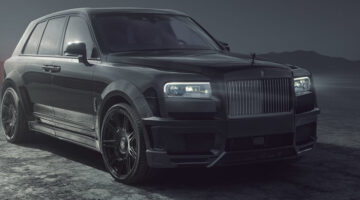