On a 1600km road trip to Le Mans in the new Audi RS Q3, our man encounters stunning landscape, interest from the military, and one of the best driving roads in the world

It’s 5.30am, and whether I’ve pitched my tent on a tree root or a discarded bottle, I’m not too sure. Either way it’s left me with a knot in my left shoulder blade. It’s a moot point though since I’m more concerned with my rapidly descending body temperature, the hastily acquired sleeping bag I’ve brought with me having proven not quite as robust as I first thought. In the background, the sound of hybrid V6s and lightweight V8s whip past on the Mulsanne Straight at more than 300kph, all while the smell of fried egg sandwiches and ‘herbal cigarettes’ starts wafting through from an adjacent tent.

Indeed, the road trip to the Le Mans 24 Hours has been on my personal bucket list since I was 17, the idea of joining thousands of motor racing fans to the oldest endurance race on the planet always striking a nerve. And unlike the last 14 times when I thought to myself “next year definitely”, I was adamant. This was the year.

Unlike my fellow Le Mans road trippers though, my journey starts at Munich Airport, wherein I meet both my companion for this 1600km journey – photographer Tim Brown – and the vehicle we will be using, the ‘15 Audi RS Q3. 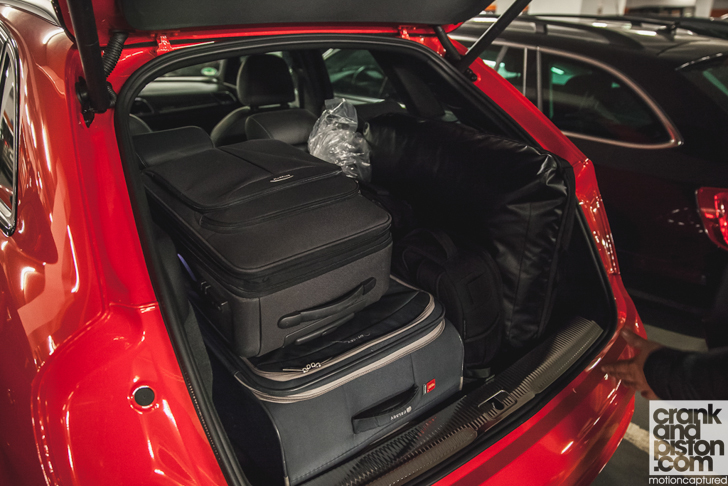 “What, no classic TVR, Jag or Lotus, James?”, I hear you ask, and I’ll admit, on first impressions, a compact performance SUV may seem an odd choice. One not without reason though. The Q3 is the first SUV to wear Audi’s hallowed ‘RennSport’ badge, and is due to arrive in the Middle East market later this year. For another, measuring 14ft long and over five feet tall, and boasting both a 64-litre fuel tank and bags of boot space, the RS Q3 should easily hold not only Tim and I but also five days-worth of spare socks and a glut of camera lenses. Plus, as an optional extra, the RS Q3 also comes with its own bespoke tent. That might prove handy.

A couple of delayed flights though mean our road trip gets underway slightly later than either of us had anticipated, and with our first ‘beauty’ stop 185km away in Bregenz, Austria, we hit the de-restricted autobahn hard. 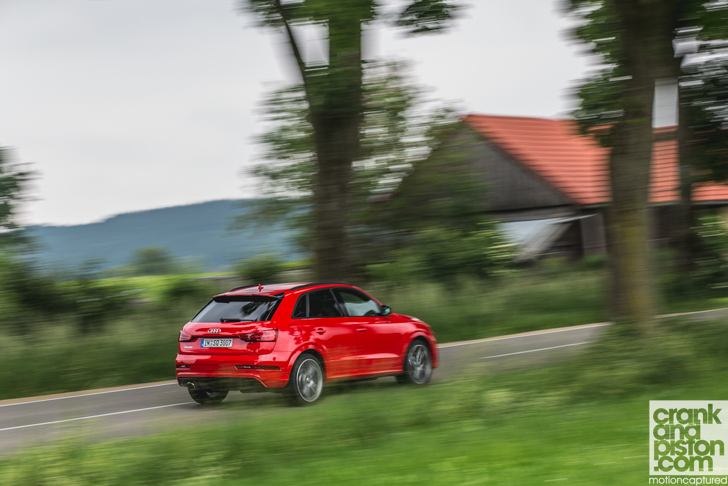 After the first hour on the road is in the bag, I’m feeling a little disappointed with the RS Q3. In the cabin, the lumbar-supportive sports seats are certainly very comfortable (if mounted perhaps a touch high), and even with RS Sports Suspension as standard, the ride comfort is also surprisingly good. The design is typically Audi modern, with lots of head and legroom, fantastic build quality and enough practicality – that means ‘cupholders’ and ‘armrests’ – to make our journey a comfortable one. It’s the amount of road roar though emanating over my left shoulder that comes as a surprise: it may be one of 30 songs on the MultiMediaInterface ‘Jukebox’ Audi has uploaded for our journey, but Peter Garbiel’s Sledgehammer is still struggling. Granted this may seem a trite comment given the would-be-horribly-illegal-anywhere-else speeds we’re hitting on the autobahn, but for a premium SUV pushing $70K, it’s a little irritating.

Still the RS Q3 does not seem unsettled by these high speeds, our good progress brought to a grinding halt only when we hit heavy traffic just outside Mindelheim, around the halfway point. Since neither Tim nor I are keen to stare at the arse end of an 18-wheeler for a further 90km, we abandon the autobahn for the slightly more picturesque back roads. It’s on said backwater route that an enormous solar park rears out of the mid-distance, a stark reminder of Munich’s goal to achieve a 100 percent renewable energy supply by 2025. A Misano Red Rennsport SUV pushing 340bhp and 332lb ft of torque from a 2.5-litre turbocharged five-cylinder may not be the most appropriate car for such climes, but given that said unit returns 8.4L/100km of fuel consumption, our consciences are clear. 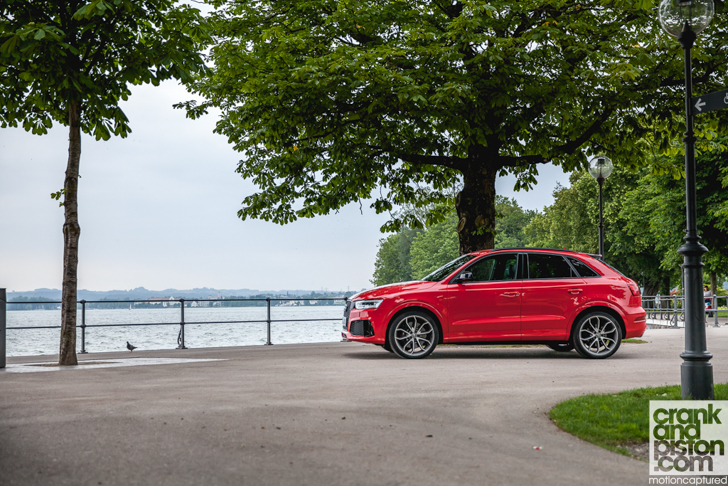 The remainder of our 90km drive through Austria includes typically beautiful European greenery, this only changing when we hit the slightly antiquated town of Bregenz, and Lake Constance. Even with the gradually dropping temperatures and the choppy waters, it’s a truly majestic sight, and though we have to leap some tram tracks to do so, we figure a few beauty shots are in order.

Bizarrely though, most of the holiday-makers who pass by seem more interested in the Audi. And not just because Oasis’ Don’t Look Back in Anger can be heard blaring through the windows. Boasting new, more aggressively chiseled headlights and a more pronounced front grille (in suitably evil black), plus some superb looking double spoke 18in alloys, the RS Q3 is an admittedly handsome brute. The sheer amount of attention it receives though on our journey – via iPhone shots or thumbs ups – I find difficult to comprehend. Three days later, upon rolling into Le Mans’ famous Houx campsite, a gentleman in a meticulous Jaguar E-Type asks if he can take a picture alongside it. Plaudits rarely get bigger than that… 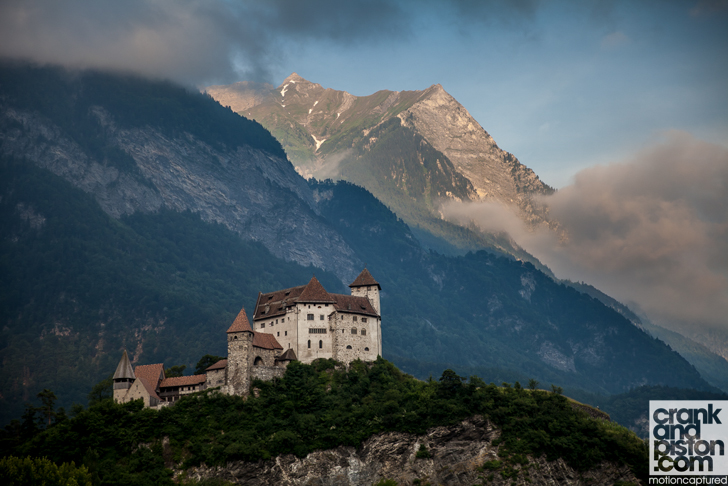 Back on the road, and after a very brief sojourn through Lichtenstein (did you know its biggest city has a population of only 5500?), evening is beginning to roll in on our 190km drive to Lake Lucerne in Switzerland. And if anything, the scenery is getting even more stunning: one particular hamlet we stumble across in Heididorf, with a church high up on the mountainside and clouds swirling about snow-capped peaks, looks like it’s been created with a paintbrush. It’s all the more random when, having taken what we think is a potentially awesome stretch of winding mountain road, we pull straight into a military barracks, unhindered by any gates, fences or signs in anyway whatsoever. It’s one of the few times when the striking look of our RS Q3 works against us, and it’s not long before a gentleman in fatigues holding an assault rifle asks us – in impeccable Swiss-English – to kindly move on.

With light continuing to fade, and nearly 400km and more than seven hours in the bag already, we call time on the day just outside San Bernardino (“any idea why that name sounds familiar Tim…?”) to pitch camp. This proves slightly more cumbersome than I thought with the RS Q3 bespoke tent. 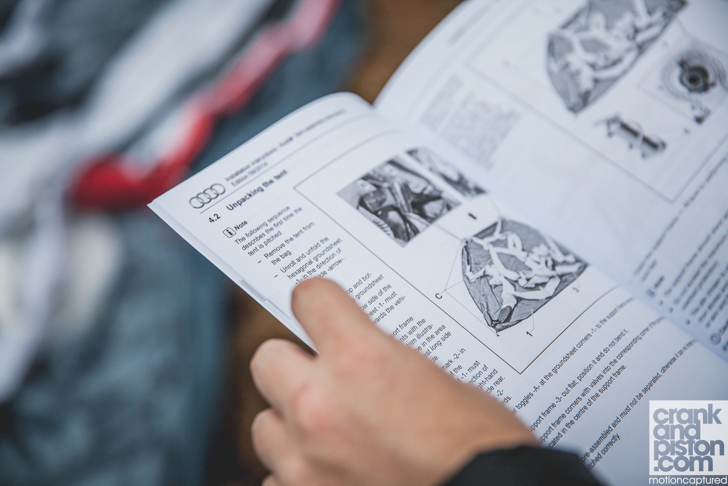 For starters, there are no tent poles supporting the hexagonal canvas. Instead, the whole structure is hung from a mass of interconnected inflatable tubes. Once up it’s a charmingly modern design (very Frank Gehry-ish). To do so though requires an air pump, a perfectly flat surface, some comprehension as to which side is the door, quite a lot of elbow grease, a little bit of swearing and breathlessness, and some barely controlled laughter from your travelling companion. Once up, the tent can actually be connected to the RS Q3 itself, effectively giving you – with the tailgate up – a walk-in wardrobe. A word of caution though: once connected, you will forget about the large piece of metal at forehead level, it will hurt, you will kick something, and across the weekend, several people will ask if you’ve been in a fight recently.

Even despite being completely knackered from our previous day’s journey, both Tim and I are up at a suitably revolting 6am and are met with a beautifully crisp summer’s morning. And, on our doorstep, one of the greatest driving roads in the world.

Bentley’s 6.75-litre V8 engine is no more: we pay homage with a classic road trip