Romain Grosjean inspired watch from Richard Mille is in ‘perfect harmony with the world of F1 racing’. Er… 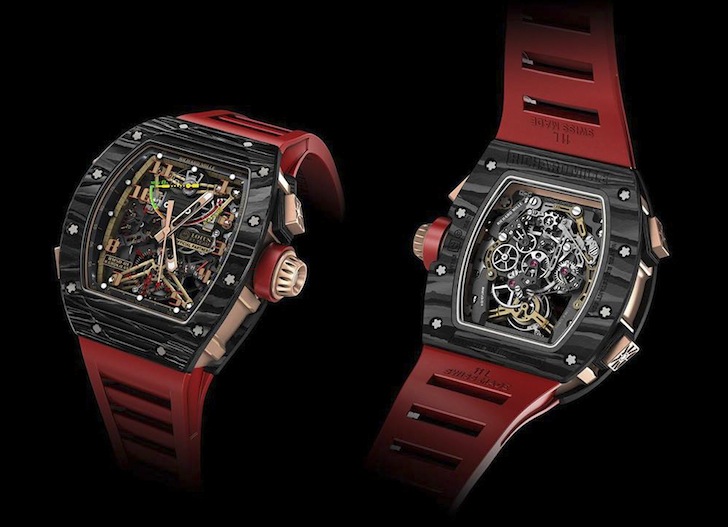 Last year noted Swiss horologists Richard Mille agreed a sponsorship deal with the Lotus F1 Team, so it was only a matter of time before this – the RM 50-01 G SENSOR LOTUS F1 TEAM ROMAIN GROSJEAN – turned up in tribute to the British team’s Franco-Swiss racer.

For Romain Grosjean – crankandpiston’s interview with whom you can read here – Richard Mille created a watch that is in ‘perfect harmony with the world of F1 racing’. Other than having a ‘mechanical heart’ and having some very clever gears, we’ve no idea what this means. What we can tell you is that the RM 50-01 – apparently the ‘ultimate racing tool’ – boasts the now traditional carbon fibre injection (as do most motoring themed timepieces) and a rather nifty G-force sensor, which measures the forces experienced under deceleration. If you see someone braking sharply in front of you on the highway, be sure to check his arm.

You’ll notice also that the hand and gauge on the G-Sensor are painted green and yellow in deference to the Lotus emblem colours. The red strap we can only assume is a nod to Grosjean’s helmet colours, though we can’t for the life of us remember what those are. On the awesome side of things, each of the 30 editions being made will come with a 1:5 scale model of the 2014 Lotus F1 car.

Richard Mille apparently made a Kimi Raikkonen watch too, but this required backcase repairs shortly after it was announced that a full year’s warranty couldn’t be afforded.

Previous ArticleLaFerrari XX. Could it be closer than we think?
Next Article 1965 Ford Galaxie 500. Driveway Hero