Escape Artist Design shows us what some of Formula 1’s classic liveries would look like on a modern car.

Ever wondered what today’s Mercedes-Benz F1 W04, Ferrari F138 or Red Bull RB9 would look like in one of the sport’s iconic liveries? No, nor us. That was until we stumbled across this cheeky collection from Escape Artist Design. Using a modern Formula 1 car as a template, the design team has taken some of F1’s most famous liveries and given them a more contemporary look. 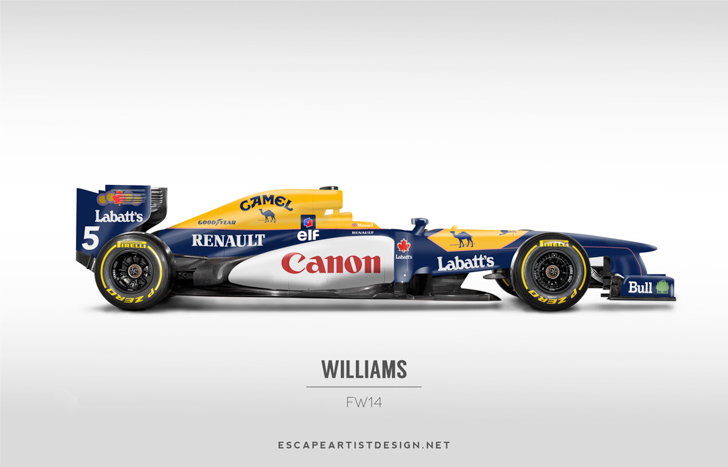 Among our favourites is the Canon/Camel blue and yellow colour scheme used on the 1991 FW14 and later the FW14b in 1992 by Williams, a car that secured 17 victories (more than half the races it started), the 1992 Constructor’s Championship, and 1992 Driver’s Championship with Nigel Mansell. 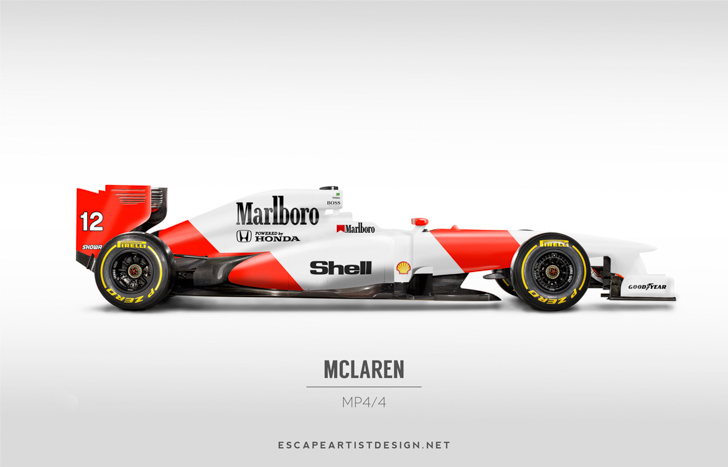 Die-hard Ayrton Senna fans will no doubt regail the 1988 F1 season with rose-tinted glasses, the inconic Malboro clad MP4/4 taking 15 wins from 16 starts – losing only the Italian Grand Prix after a helping hand from Jean-Louis Schlesser – and securing Senna his first of three world titles. The MP4/4 remains one of Grand Prix racing’s most dominant cars, the Ferrari F2004 coming close to taking the McLaren’s record by securing 15 of the 17 race victories in 2004. 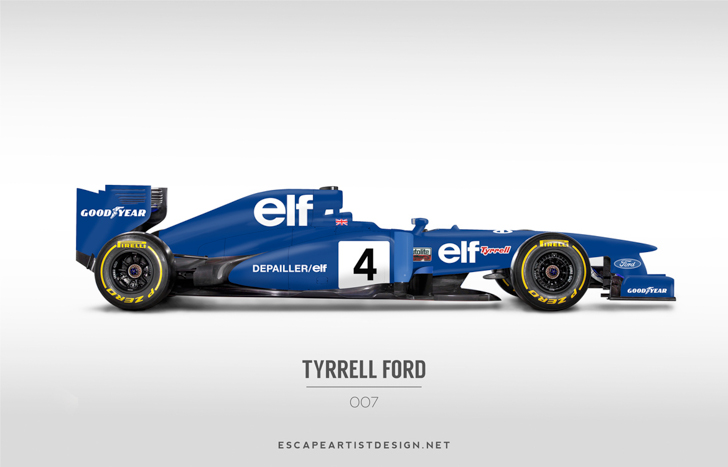 One year on from Jackie Stewart’s final F1 season and Francois Cevert’s fatal accident at Watkins Glen (40 years ago this year), Tyrrell entered the 1974 season with a brand new driver line-up and a swanky new livery to boot. At the hands of Jody Scheckter, the 007 took two victories – new teammate Patrick Depailler taking a couple of podium finishes in his first full F1 season – and third in the constructors standings. Another race victory would come the 007’s way in 1975 before the now infamous six-wheeled P34 made its debut in 1976. 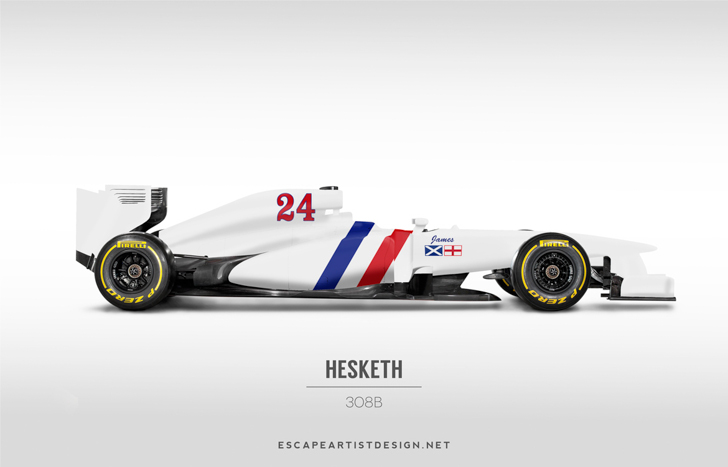 Perhaps a more memorable car in 1975 though was the Hesketh 308B, which – at the Dutch Grand Prix handed both the team and British playboy James Hunt their first F1 victories. Come the end of the season, Hesketh Racing bowed out of F1, though their legacy lives on. And thanks to a 1976 world title and a certain film by Ron Howard, so too is James’.

Just some examples of this striking collection from Escape Artist Design. We reckon though that the 1991 Jordan 191, the 1972 Lotus 72, the 1983 Brabham BT52 and the 1999 Arrows A20 would make great additions. But which would you include? Use THIS LINK as a guide and let us know in the comments box below.