You’ve seen the sights, you’ve watched the tricks, but a lot of the energy at the Red Bull X-Fighters 2013 World Tour round in Dubai came from the commentary team. 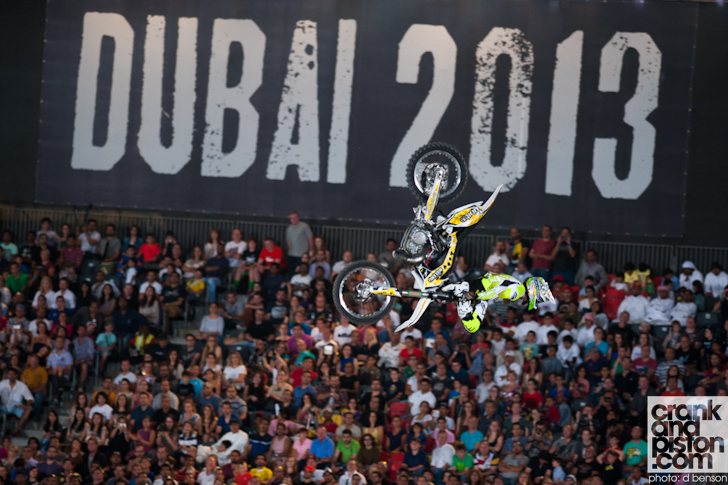 The Red Bull X-Fighters 2013 World Tour returned to Dubai this weekend for more thrills, a couple of spills and ridiculous amounts of mid-air gymnastics on FMX Hondas, KTMs and Yamahas.

As you’d expect with any petrol-soaked, tyre-smoking arena of motoring flamboyance, crankandpiston was on the ground to soak up the action. As well as a 15,000-strong crowd at the arena just off Mohammed Bin Rashid Boulevard, eleven of the world’s top FMX riders were out in force in Dubai, as was the commentary team of Tim Warwood and Virgin Radio’s Chris Wade.

Now while we pride ourselves on witty and insightful banter on crankandpiston, even we were put in the shade by some of the quotes from the commentary team. They certainly got the X-Fighters crowd smiling, and for those of you unable to make the event, we thought you might like to see some of the highlights: 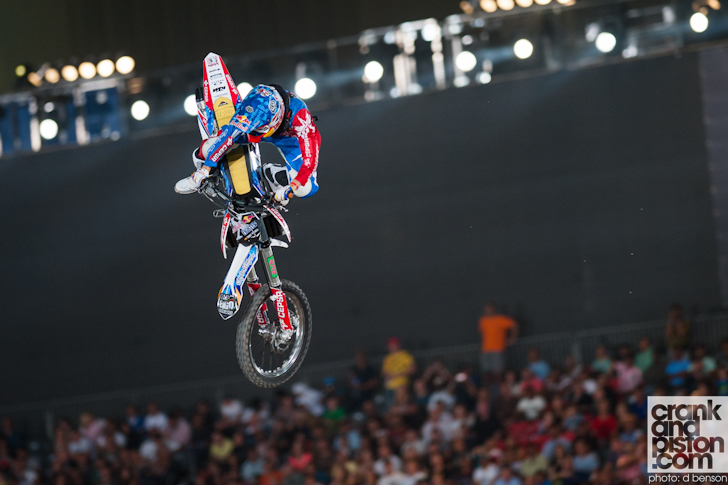 [On Josh Sheehan’s Ruler Flip] “Dip that in chocolate, we’ll all have one!”

[On Libor Podmol’s Cordovaflip] “Take that to the G8 summit. That trick could bring about world peace!”

[On Mat Rebeaud’s Flair] “You don’t get many of those to the dirham, let me tell you!”

[On Mat Rebeaud] “And there I thought that only Michael Jordan had hang time.”

[On Mat Rebeaud] “Oooooohhhhhhhh, that was Burj Khalifa massive!” 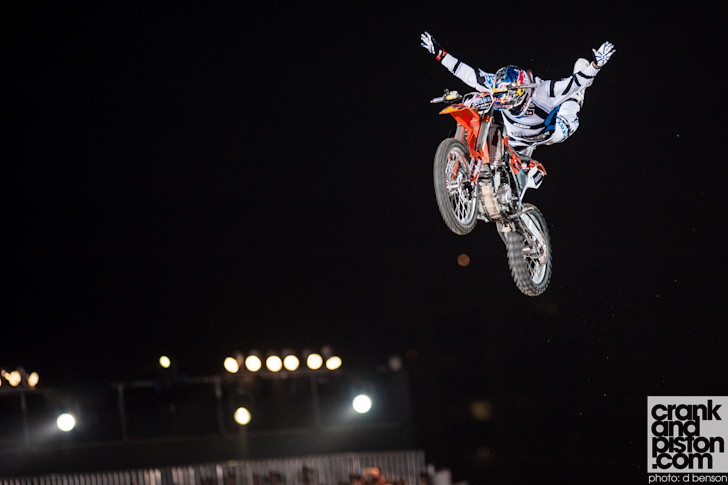 [On Mat Rebeaud] “My eyeballs are sweating after that run!”

[On the Torres/Rebeaud quarter final results] “A clean sweep! Judges, how can you sleep at night?!”

[On the Torres/Rebeaud quarter final results] “The judges are doing the scores. Bagsy not them!”

“I’m opening a can of Red Bull [click]. The sound of jealousy!” 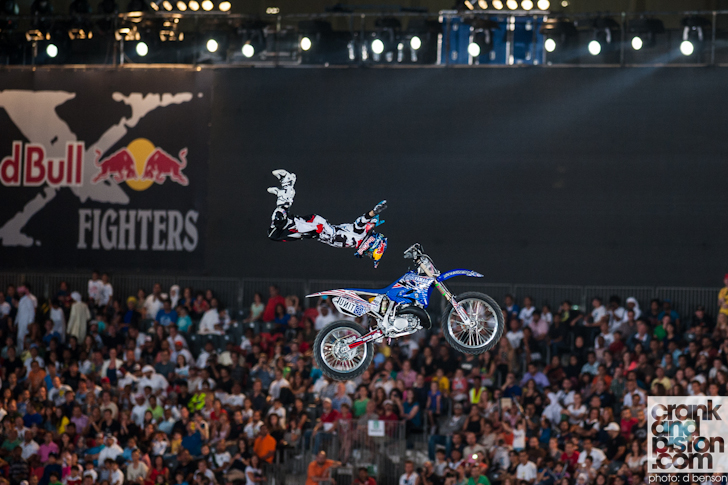 [Pagès Holy Grail] “That rolled in sugar would sell for 50 dirhams a pop!”

[During the Melero/ Pagès quarter final results] “If you’ve got a pacemaker, turn it down. You won’t need it!”

“There’s not one man here in the arena tonight who doesn’t want to be on that bike.” 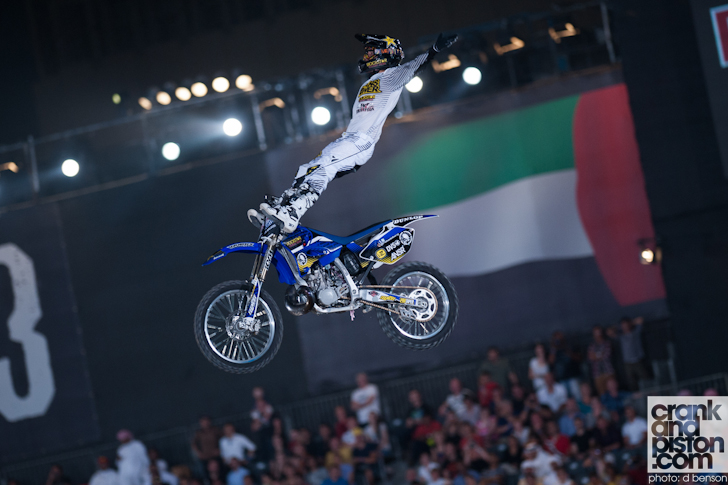 [On Rob Adelberg] “He’s going to take the wheels off the bike. That’s how good he is!”

[On Adelberg] “He makes no mistakes. They should call him the head teacher.”

[During Adelberg’s Oxicutioner Backflip] “Look at his back! Someone call a chiropractor!”

[On Levi Sherwood’s semi-final run] “We’re so loud, Abu Dhabi can hear us.”

[On Pagès semi-final run] “His book of tricks reads like a Bulgarian cocktail menu.” 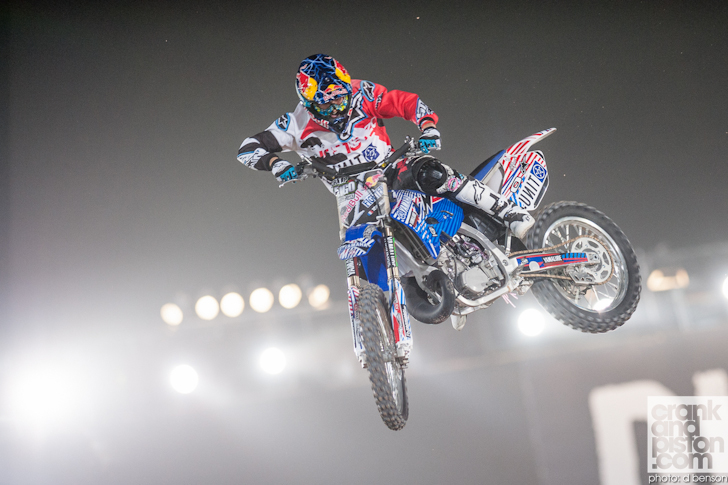 [On Pagès’ Superman seat grab flip] “I’d have burst into flames if I tried that.”

“Wow, wow and more of that wow factor.” 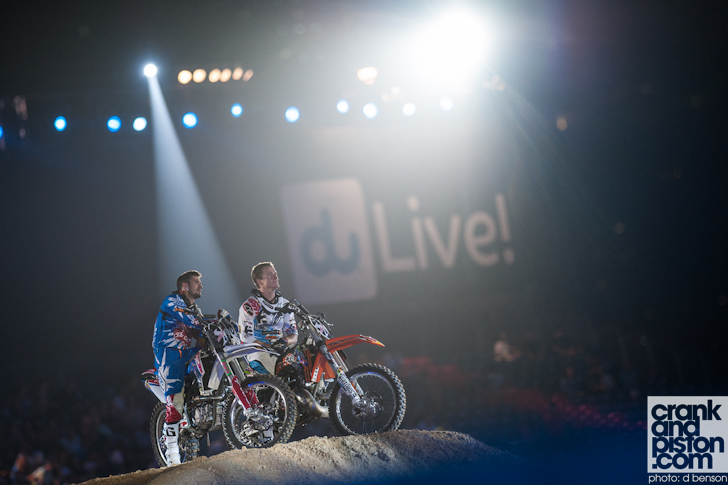 “I can’t wait for my voice to break.”

[Following Sherwood’s final run] “Judges! Have that! Or should say, ‘Good Luck’?!”

[On Torres’s final run] “The only thing wrong with that run is that the stickers on his bike are crooked.”

Perhaps though you were at the event, and there was one particular rib-tickler that we’ve missed. If so, why not let us know in the comment’s box below.