crankandpiston welcomes RAUH-Welt Begriff godfather Akira Nakai back to Dubai, UAE, and watches the birth of the second RWB car to hit the region. 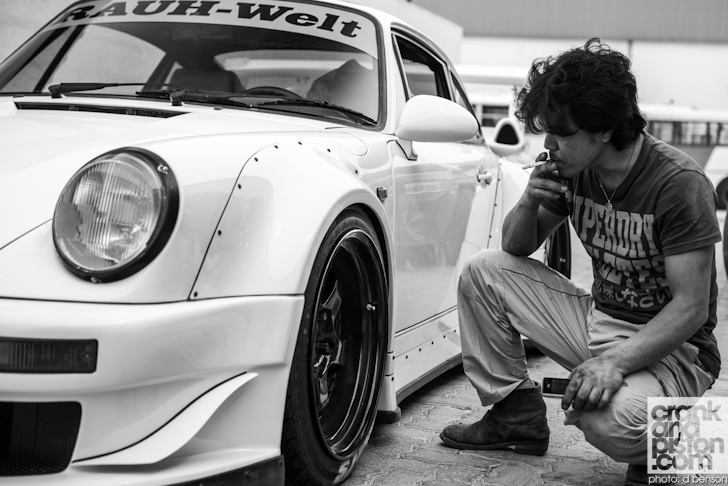 It’s the phone call we’ve been waiting for at crankandpiston for almost a month. Various bits of customs procedures and administrative pain-in-the-arsery had left a question mark over this particular build happening at all. But these three abbreviated words confirm that everything is a-go, and we’re soon heading out the door – Canons and notebooks in-hand – for our first look of the Porsche 964 that just four days later will become the latest RAUH-Welt Begriff car.

Yep. Akira Nakai, the man behind ‘Rough World Concept’ and Japan’s favourite customiser of old Porsches, is back in Dubai. 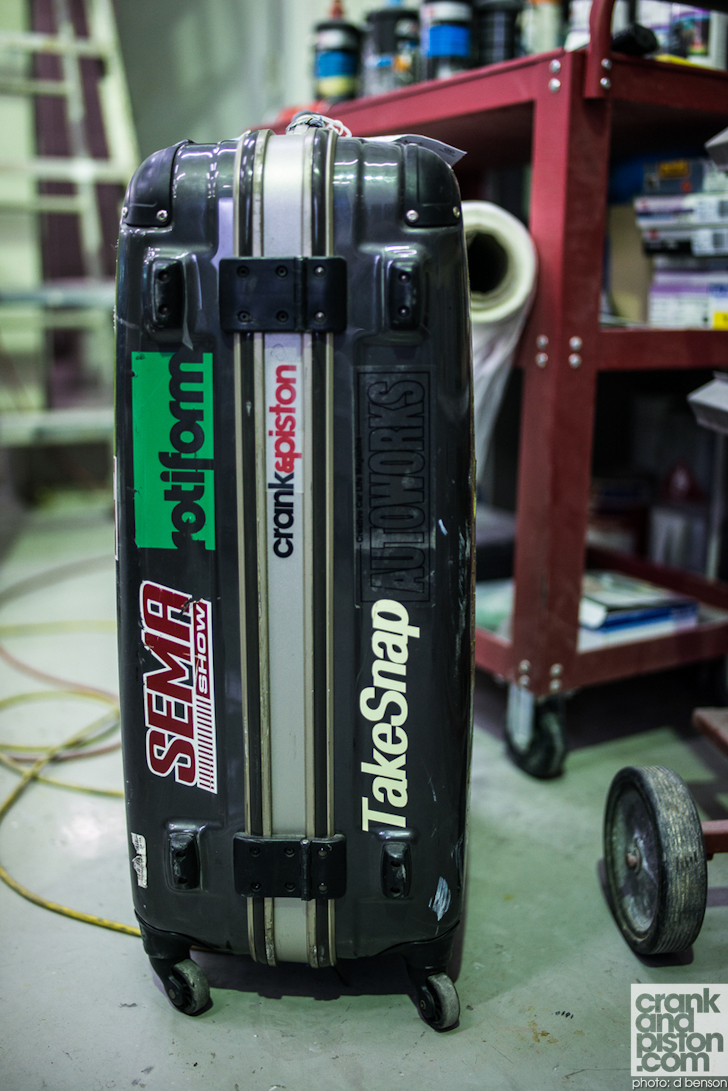 Predictably, despite a busy schedule that’s seen him visit Vancouver, Bangkok and Saudi Arabia within the last month and a nine hour flight to Dubai from which he only escaped at 5am this morning, Nakai-san is already hard at work we arrive. Indeed, despite some pretty crippling jetlag and only two hours of sleep, he’s been on-site since 9am. Click pretty much any RWB YouTube video, and the passion of the man is beyond doubt, and it’s this enthusiasm that has brought not only crankandpiston but a few devoted followers to Living Classics today, where the build will take place. Nakai-san is not too busy though to offer us a cheery wave and handshake before cracking straight back on with the task at hand. 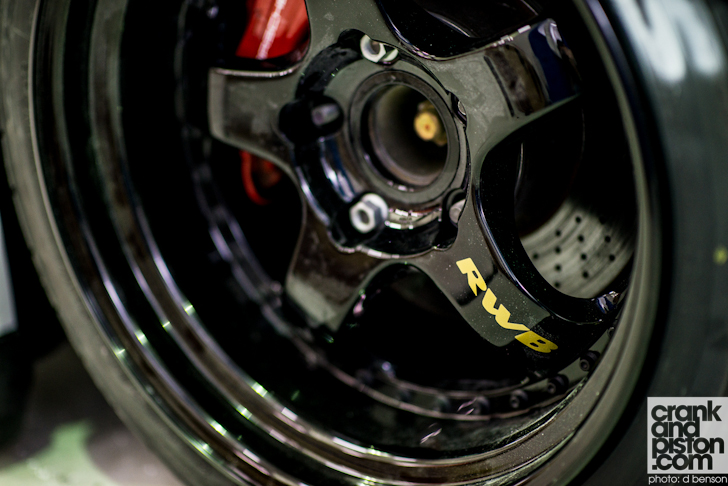 You may remember that on RWB’s last visit to Dubai, crankandpiston was a regular follower of – what would become – ‘Dark Romantic’, the first RAUH-Welt project in the Middle East. We were even lucky enough, thanks to the generosity of new owner Zafer Taher, to take Dark Romantic for a spin. It was an experience that few of us will forget in a hurry, and not just because the prospect of scuffing an RWB alloy would have landed us in the hottest of hot waters.

Despite the frequency of his visits during Nakai-san’s four-day stopover in Dubai, Zafer is not the owner of RWB Dubai Mk.II. While we’ll refrain from identifying the new owner, we’d like to thank him for allowing us the opportunity to follow the build as closely as we did. Indeed, and rather incredibly, Nakai-san admits that this particular build had him slightly worried at first. 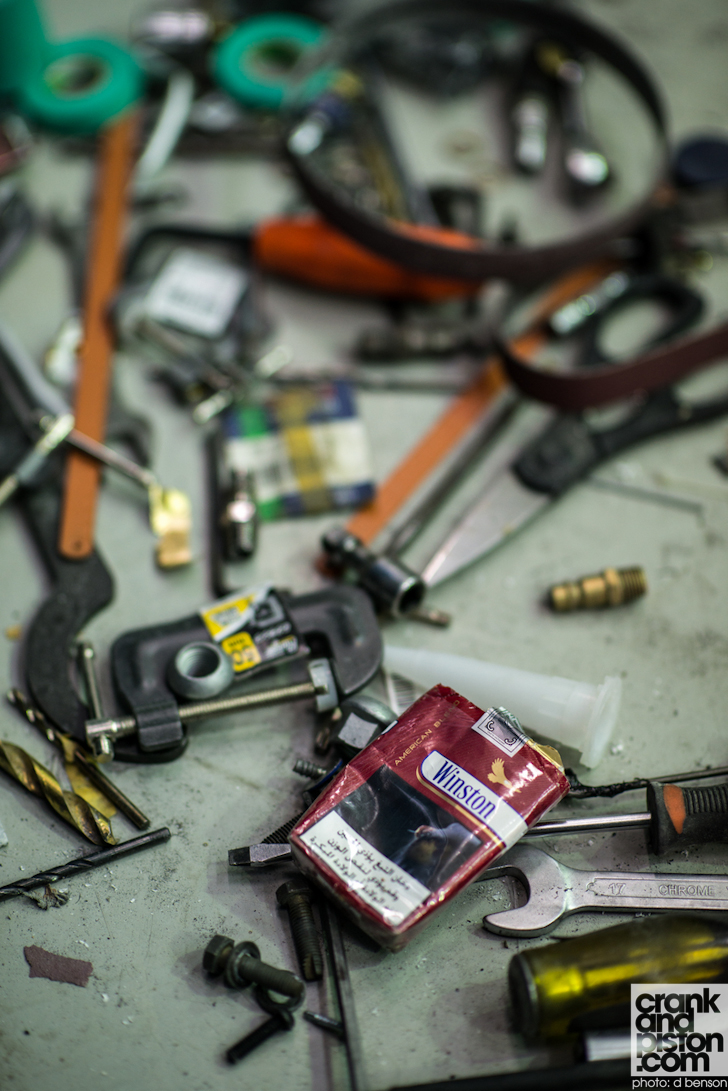 This is the first 3.6-litre Porsche he’s ever worked on, his prowess being mainly 3.8-litre powered machines. Power delivery is something the Japanese craftsmen has to consider, especially given the effect any change would have to the ride height of the vehicle: we couldn’t even fit a credit card between the rear wheel arches and enormous idlers on ‘Dark Romantic’. It’s not like he’s come unprepared however, as the upended collection of screws, ratchets and blocks from his travel bag confirm. The engine cover has already been removed, and when I ask him if the 3.6-litre unit will cause problems, his cheery “no problem” puts all concerns to rest. 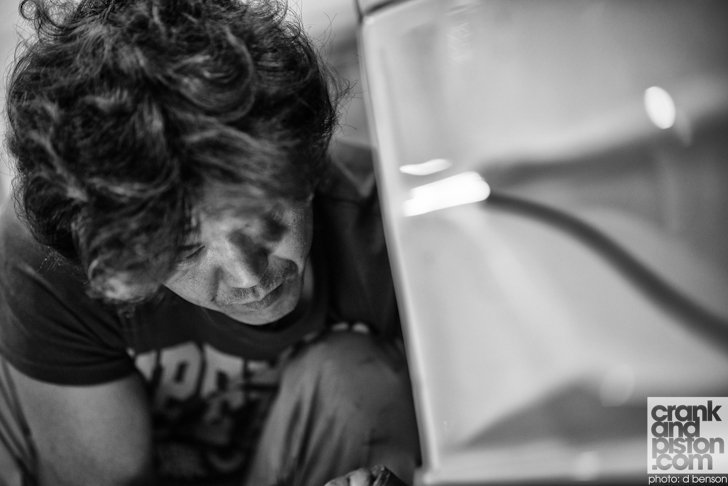 It’s been a productive morning. The old Porsche suspension has already been removed and the new Aragosta suspension kit fitted. There’s still some minor adjustments to make, but those will come later in the week. Now Nakai-san’s focus is on the bodykit.

The interior – a rather tired looking brown leather example with a missing radio and a five-speed manual gearbox, though fully original if nothing else – has been left intact. Focus instead is on the 964’s front bumpers, wheel arches, side skirts and rear bumper. In keeping with the vehicle’s predominantly white exterior (I say ‘predominantly’ since the block of wood holding the boot open highlights the original dark blue paint finish), all the RAUH-Welt kit has been sent to the paintshop: everything from the front bumper and fender overrides to the rear splitters and upper spoiler. Living Classics’ own Dave Dresden even shows me the 22-strong spec-list, listed, signed off and photographed so that not a single piece is lost in Dubai after having made the hefty sojourn across from Japan.