We’ve been packing in the convertibles lately, but this one’s a little unusual. Because it’s a Range Rover. The brand new Range Rover Evoque Convertible, to be precise. And crankandpiston.com was invited to drive it on the international launch in the Alps.

Technically – TECHNICALLY – what you’re looking at here is not the first ever convertible Land Rover. Sure the Series 1 adorned more military-esque paintwork and was of most use to prosperous cattle farmers, but you could reasonably argue that the fabric Land Rovers of the 1940s started a niche in more ways than one. And in an entirely different way, the new Evoque Convertible taps into another lucrative segment for Land Rover’s fastest selling model to date. It’s already being billed by company execs as ‘the world’s first luxury convertible SUV.’

And chances are you already have a few choice thoughts on that based on the looks of the newboy alone. Dramatic and menacing in equal measure, to this writer’s eyes at least, it’s still a bold move. Aesthetics at the front won’t come as a shock to most of you, and even at the back – despite changes to the rear fenders, tailgate and the addition of a taillip spoiler for ‘aerodynamic purposes’ (no giggling please, this is serious), there’s been little significant amendments. The biggie of course is that all-new fabric roof. Penned by Webasto – they of Ferrari and McLaren Spider fame – the z-fold fabric architecture usurps a traditional retractable hard-top in favour of weight saving, and while this has seen the disappearance of the rear middle seat and boot space slashed from 420 litres to 251 for stowing purposes, it doesn’t appear to have affected the overall civility of Land Rover’s most ‘lifestyle’ of models. Indeed, as our cruise in the Alps demonstrates the new roof retains acoustics and cabin heat surprisingly well, despite the sub-zero temperatures. Seats and headroom, even with the roof up, is also impressive, and actually feels higher than the coupe. Thankfully, Land Rover’s prehistoric infotainment setup has now been given the boot in favour of a new 10.2in InControl Touch Pro system for added compatibility. The only slight niggle in the grand scheme is the lack of rear middle rear seat in this – let’s say– 2+2 seater during long journeys. Well, that and the weight… 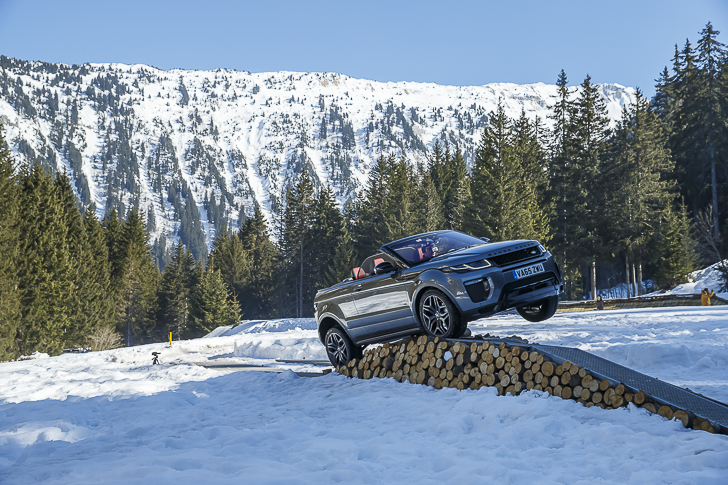 Was wondering when you’d get on to handling…

Unsurprisingly, additional bracing has been implemented to counter the missing roof, and combined with the additional weight of the mechanism itself, the new Convertible does tip the scales at a slightly portly 1936kg, some 246kg more than the Evoque coupe. That’s like adding four additional passengers straight off the bat.

A potential pitfall, were the Evoque the kind of car you’d want to test the levels of adhesion to on sinuous mountain passes, though fortunately this is not an issue for the Evoque, surprisingly nimble though it is. Indeed, though a lifestyle statement on one-hand, the convertible is a Land Rover nevertheless, and as such has been designed ‘for all seasons’: four seats, four seasons, four wheel-drive, if you will. Beneath the additional bracing lies Land Rover’s Terrain Response System, synonymous with the company’s Defender and Range Rover, and a bear on the off-road terrain. Don’t let that low front valance fool you, since the convertible is still well capable of scaling up to 45-degree gradients, and, as was also demonstrated, can safely tilt at up to 35-degrees without losing traction. Believe me, in an open-top Range Rover, this is considerably more nerve-wracking than you might think, but oh so much fun. 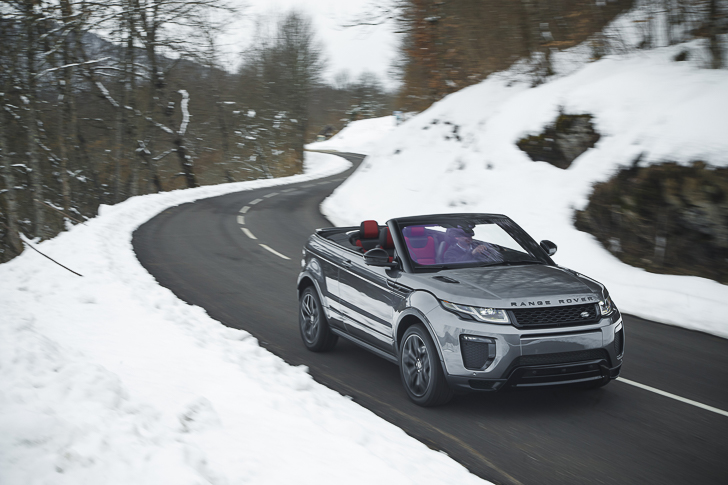 On the mechanical side of things is the same 2-litre turbocharged Si4-generation four-cylinder found in the five-door and coupe, here producing 237bhp and 251lb ft of torque. While that lags 60lb ft off the equivalent diesel engine, that still means a 209kph top speed and a 7.8-second 0-100kph time. Not bullet fast, sure, but certainly sprightly enough for a near three-ton SUV, especially when you consider a Subaru BRZ takes about the same amount of time. It’s a spirited burst of acceleration that’s accented by smooth if not strikingly fast changes through the nine-speed gearbox. All in the name of that ride comfort, of course…

Consequently acceleration is smooth and linear, combining with precise and weighty steering, massive amounts of traction through all four wheels and some hefty grip through the tyres to provide some surprisingly agile cornering: even with a hip-height seating level and a reasonably tall centre of gravity, there’s not the lumbering sensation through the corners you might reasonably expect from an SUV. Indeed, there’s surprisingly little body roll to contend with at all, a notch in the motoring bedpost for the tautened suspension that somehow doesn’t unduly affect ride comfort either (it is a Range Rover, after all). You might reasonably expect then that brake response would be an issue, given the 1936kg they have to reign in. Surprisingly not: you may stop on a die, but for a vehicle of this size, stopping power is actually quite impressive for a vehicle of this size and girth. 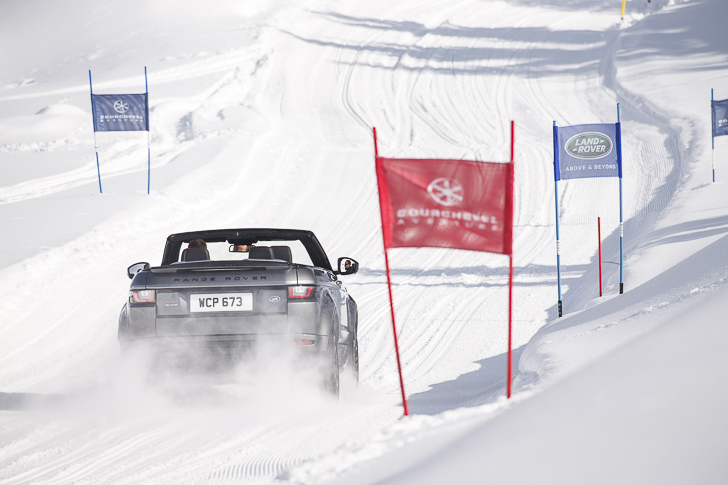 Chances are though that, as we mentioned earlier, you’ve already made your mind up about the new Evoque Convertible. Land Rover’s most lifestyle model may have taken a radical turn with its new drop top, but then so too did the original Evoque when it was first launched in 2011 to, let’s say, questionable critique. Let’s not be too quick to jump on the proverbial open-top bandwagon just yet then. After all, the new convertible certainly looks the part, offers the refinement and comfort of its hardtop sibling (if perhaps slightly less practicality), the same off-road durability we expect from Land Rover, and as 2000+ pre-orders have proven, already has strong desirability on its side. Don’t be too surprised to see others following in the Convertible’s footsteps in the not too distant future.