The parking valet at the prestigious Al Badia Golf Club looks confused. Judging by the car park, he’s used to taking the keys of Range Rovers, Mercedes S-Classes and the occasional Lexus. But faced with a bright red rally car, its sputtering exhaust echoing off the sandstone walls, he seems unsure whether to ask for the key or call the police. Relief spreads across his face when he’s assured that we have permission to be there and he doesn’t need to park it.

In fairness, the QT Wildcat we’ve just rocked up in doesn’t look the most approachable of vehicles. Crouched on its huge shock absorbers and chunky all-terrain tyres, it’s bred for the brutal world of rally raid and built to withstand a battering from whatever the elements can throw at it.

So why have we got one at a golf club? Well, this isn’t just a regular Wildcat; it’s one designed to be used on the roads, to have more creature comforts than a machine designed solely for motorsport. And if you check the options list, you can even specify it with a golf bag holder. 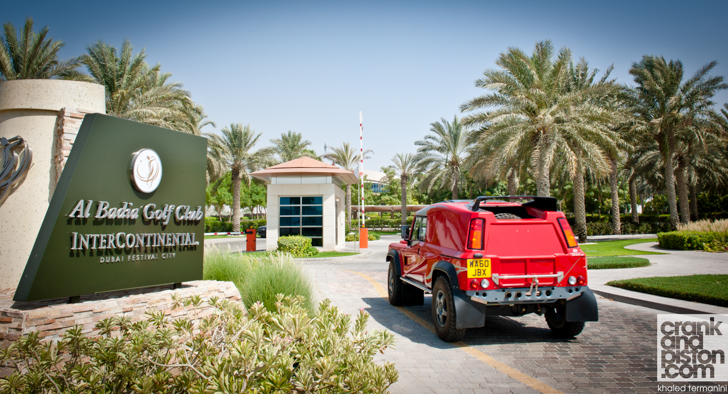 More on that in a second, but first, a brief history of the Wildcat. It was originally created by UK firm Bowler Offroad as an evolution of the Tomcat; a rough and ready rally car based on the Land Rover Defender. After gaining some serious credibility, Bowler developed a new car, the Nemesis, and sold the rights to the Wildcat design to another UK firm, QT Services, so that it could continue to look after existing customers and develop and manufacture the vehicle.

And develop it has. The version looking rather out of place at the golf club is the 300STR version, and we’ve just picked it up from the Dubai HQ of Saluki Motorsport, QT’s Middle East point of contact and Land Rover specialist. It’s a response to requests from customers for a more comfortable road-going experience. Although the rally cars were road-legal, they weren’t designed with creature comforts in mind. Only raw speed.

The 300STR, of which this particular car is the first example, is therefore annointed with a range of features to make everyday life in a Wildcat a bit less, well, wild. Each one is built to personal specifications of the customer. Think of it as My Fair Lady, but with a V8-powered 4×4 playing the part of Eliza Doolittle (a 4.6-litre Rover affair, in this particular car). Can this rough and ready racer cut it in the refined world of a top-class golf club?

Only one way to find out. I gingerly edge the Wildcat away from the still-baffled valet, gently ease it round the back of the clubhouse to the driving range and open up the back. No powered tailgate here – it’s all clips and panel hefting. In the rally version, this space is where a plethora of spare wheels and tools reside. In the 300STR you can specify a golf bag holder. (It’s only when we arrive at the club, after several weeks of golf-themed planning, that Mark reveals this particular vehicle doesn’t have said option fitted. So you’ll have to use your imagination somewhat.)

Despite it being the height of the Arabian summer, there are golfers on the range, practicing their swing. As I burble the Wildcat up behind them a few eyebrows are raised, but once they see me swinging a golf bag out of the back, they’re more interested. The men particularly seem particularly keen, but a glance inside shows that, despite the improvements, levels of luxury are not even on the same page as the likes of Lexus or Land Rover. Many comment that their respective other halves would never allow such a thing, but they’re envious nonetheless. A blonde lady called Anna spends a while poking around it before getting exasperated at my obvious lack of golfing talent. After a few pointers I’m delighted to finally smack the ball a hundred yards into the distance. Afterwards, Anna asks if she can have a copy of the pictures taken of her with the car. A fan won.

With some practice under my belt, and at least a partial mark of respect from the Al Badia patrons, its time to take the Wildcat back to its natural habitat. We’re joined by Luca Cima, long-time crankandpiston.com contributor and excellent golfer. He’s here to give me some tips as we take golf to the QT’s back yard; the desert. 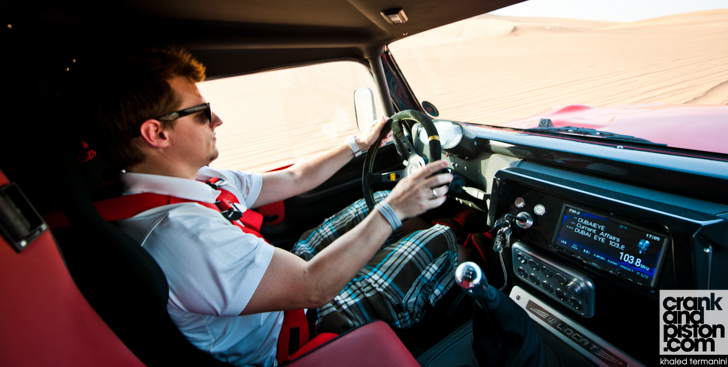 We chuck Luca’s golf bag in the back, leave Al Badia and head out of Dubai. This is the first time I’ve tried the Wildcat on the road (Mark drove it to the golf club) and it’s not nearly as daunting as I feared. In fact, it’s remarkably easy to drive. It’s quite agricultural, very noisy and very mechanical in its feel, with a definite motorsport vibe. The wheel is a small Alcantara-trimmed three-spoke affair, sans airbag, and I’m attached to the bucket seat with four-point harnesses. I’m struggling to reach the plumbed in AC controls thanks to the big red belts, but otherwise I’m rather comfortable.

The noise is the main experience. At 120kph the engine runs at 3200rpm and I can hear everything – the rush of the wind outside, the rumble of the road beneath the big tyres and the whine of the transmission, and clunks as I shift gears manually. The wheels are wrapped in big, chunky off-road tyres and on some of the cobbled streets around neighbourhoods in Dubai I can hear and feel the tread blocks ping of the surface.