Porsche’s push towards sustainability has taken another big step forwards with the announcement its e-fuel production facility in Chilean Patagonia has now broken ground. The challenge of decarbonisation for the automotive industry is a large and complicated one, but Porsche firmly believes that e-fuels will be part of the solution, in addition to electrification and hydrogen technologies.

The project moves Porsche one step closer to the industrial scale required for carbon-neutral fuels to become a viable part of its decarbonisation plans. In short, Porsche believes that environmentally responsible fuels, that is ones that capture some proportion of the emissions related to burning them in their production process, can extend the life of combustion engines vehicles.

In order to do this, it has worked with German tech giant Siemens in the development of the project, and forecasts exponential growth in capacity over the next five years, ending up with as much as 550 million litres in annual production by 2026.

The fuel itself will be utilised initially for internal means in the running of Porsche’s combustion-powered racing and heritage cars from 2022, but the brand is planning to sell its environmentally-friendly fuels to consumers in the longer term. This will give Porsche owners across the globe access to fuels for their combustion-engined models regardless of how the supply of traditional petrol and diesel changes as its use in private vehicles is curtailed post-2030.

Investment into e-fuel or synthetic fuel technology is something that’s been explored by many manufacturers to some degree, but this option has taken a distant back seat to electrification in the range of measures being explored to tackle the climate crisis. While difficult to communicate to the general public, Porsche believes the technology will play an important role moving forward, explaining the desire to invest so much into this project. If it leads to Porsche gaining eventual control over a resource that traditional car manufacturers have never needed to really consider before, it may prove to be money well spent. 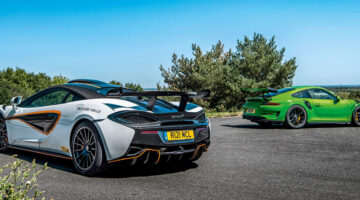