Porsche WEC. Behind the scenes with Le Mans winners

Last year the 919 Hybrid secured Porsche its 17th 24 Hours of Le Mans victory as well as both World Endurance Championship crowns. That’s quite an act to follow, as crankandpiston.com found out when invited behind the scenes of Porsche’s pre-season test session at the Yas Marina Circuit

It’s a slightly brusque question fired at Porsche LMP1 team principal Andreas Seidl, but I’d be lying if I said it wasn’t on everybody’s mind. In its sophomore World Endurance Championship season last year, Porsche secured both the Drivers’ and Manufacturers’ titles as well as a long-awaited 17th victory at Le Mans. From the season’s eight rounds, the 919 Hybrid took all but two race victories, and a further six podium finishes ensuring Stuttgart was never out of the top three. Given its strong hit rate in 2015, it’s not like Porsche has anything else to prove
in the WEC…

“What we achieved in 2015 was great, but it’s history now,” Andreas explains, a Chopard watch peaking not-accidentally out from under his jacket sleeve. “We’re effectively starting from scratch, so it’s important to keep both feet on the ground, prepare properly, and use the same attention to detail we have for the last two years. It’s very much game on again.”

Succinct and to the point. Andrea almost makes its sound easy. 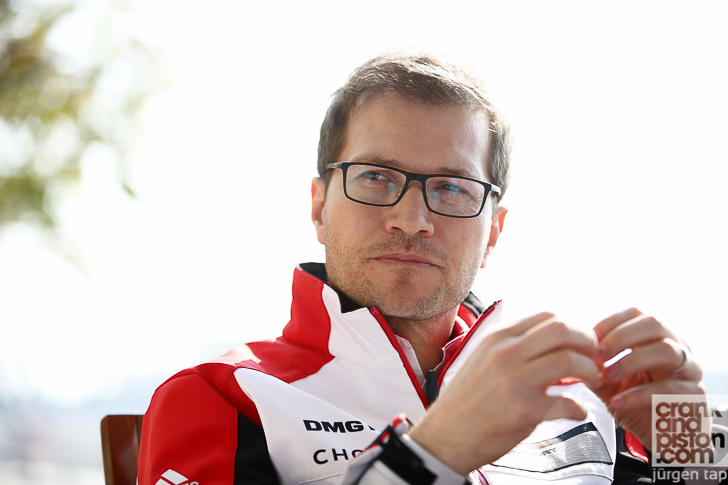 We’re currently sitting in the Yas Marina Circuit paddock, a couple of voice recorders and iPhone speakers pointing in Andreas’ direction. We’re one of the few media outlets in town – and indeed globally – who have been invited behind the scenes of Porsche’s second of two test programs in Abu Dhabi before the 2016 World Endurance Championship kicks off in April. And so far, things seems to be going well. There’s the traditional hustle and bustle in the team garage of course as mechanics and engineers remain glued to timing screens, laptops and a bank of two-dozen computer screens mounted to a temporary framework. But there’s not the frenetic pace one might reasonably expect of a reigning world championship outfit with limited testing time: during our near-hour long conversation, Andreas’ phone chirrups just once, our conversation interrupted only intermittently by the high-pitched wail of Porsche’s 2016 WEC challenger racking up the kilometres.

There’s still a couple of weeks to go before the final ‘Prologue’ session at Paul Ricard, a weekend that, incidentally, Porsche finishes solidly on-top. Today’s test then – day four of five – is exclusively about Michelin, former Formula 1 man Mark Webber conducting the opening leg of some ‘intense tyre development’ before handing over to teammate, and fellow Driver’s World Champion, Timo Bernhard. Hopefully he’ll not be too shagged out after six consecutive hours in the hot seat to spare us a few minutes later.

But while the hard and soft compounds lining the Yas garage walls seven-high, ten-wide and three-deep are today’s focus, it’s far from the only thing Porsche has had to work on during the winter, a point Andreas makes during a tour of the garage. Indeed, new regulations mean that although the team’s 919 Hybrid LMP1 is ‘merely’ an evolution of last year’s title winner, some major tweaks have been required. The hybrid powerplant, for one.

“Our concept is actually quite aggressive, so any changes to the regulations are always going to hit us quite hard,” Andreas continues. “There’s no magic fix, so it can be quite frustrating. But these new regulations still give our engineers a lot of freedom, and that really drives them, as we’ve already seen. Last year we had easily the best car, the best driver line-up and the best team performance. I’ve no doubt we can repeat this this season, even with less fuel to work with.” 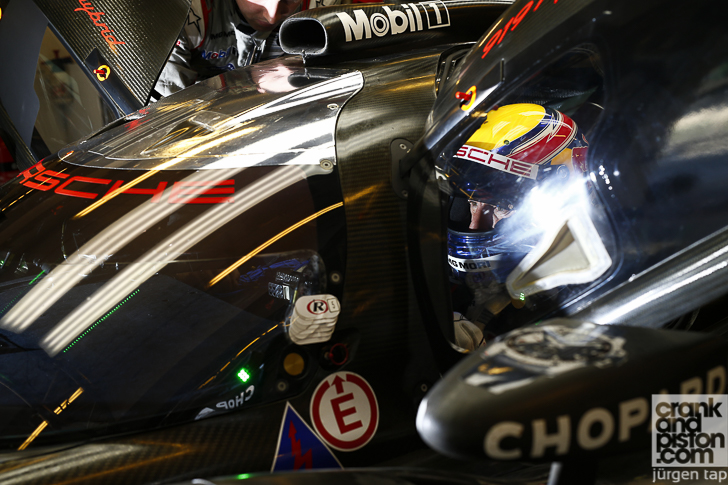 To reduce racing speeds this season – a factor that ultimately saw the demise of the World Sportscar Championship, and almost cost former World Champion Anthony Davidson his life in an enormous accident at La Sarthe in ’14 – there’s been considerable belt tightening around it’s hybrid powertrain. And it’s brain-rottingly complicated. A 2-litre petrol V4 sends ‘less than 500bhp’ to the rear axle via a seven-speed sequential racing transmission, while a separate electric motor sends ‘more than 400bhp’ to the front, effectively giving the 919 temporary all-wheel drive. For 2016 though, the amount of permitted fuel per lap has been reduced in an effort to encourage more efficient electric powertrains. Indeed, two on-board Energy Recovery Systems draw up to eight megajoules (MJ) of ‘used’ power from the brakes (at the front) and the exhaust (the rear), the highest possible and more than either principal rivals Toyota or Audi could summon last year (even with its new R18, Audi still can’t match it). As a result, for 2016, Porsche is limited to 4.31-litres of petrol for every lap, which – even when you consider the 900bhp power output – is still a sizable drop: it equates to a loss of four seconds, per lap, around Le Mans.

There’s slightly more to this though than German efficiency. Porsche’s LMP1 program works heavily in tandem with the road car division, technology and hybrid expertise passing back and forth for the benefit of both companies. The 919’s 800-volt electrical system for example may seem familiar to some, since it’s also used in the new Mission-E Concept, set to become – if rumours are to be believed – an all-electric production Panamera. Though an 18th victory at Le Mans and another two World Championship trophies might cement a legacy and sell a few more road cars, there is more to Porsche’s WEC campaign than outright glory. In many ways, it represents the company’s future. 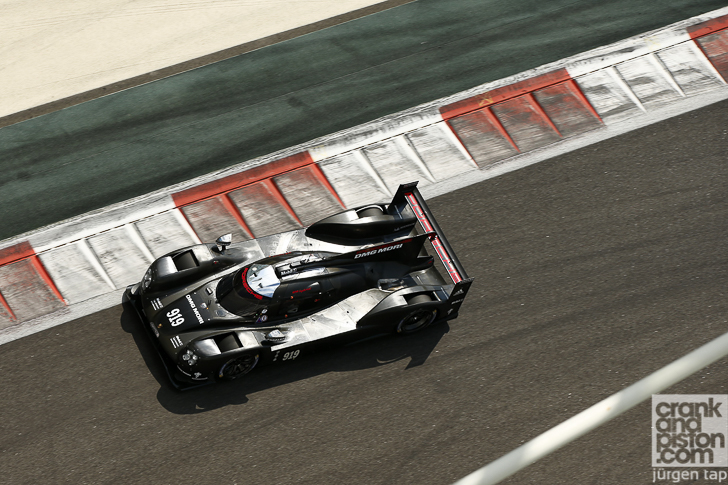 “One of the main reasons Porsche returned to sports cars was the benefit this would have for the road car division,” Andreas explains. “Discussions were already in place about the WEC’s future regulations, with renewed focus on efficiency, and it was through this that we saw a perfect platform to develop technology for the road in a motorsport environment. We actually took a lot of people from the road car side, which meant we had a big head start on hybrid technology in the beginning. It’s like when team members move across to road cars: they’ve worked in high pressure situations and can bring knowledge that others just don’t have.

“And it’s not just about the individual technology. It’s about the materials used within that, the software, the development of an already proven hybrid system. It’s a step-by-step process, so there’s elements we might not see for another five or six years. ERS, for example, since it’s only a matter of time before…”

The end of this point is cut off rather dramatically as Webber in the ‘919’ clad prototype (the new red, black and white livery will boast the sacred #1 in Paul Ricard) pulls into the pits, team personnel moving quickly to jack the car, flick the kill switch and interrogate the driver for vital data. Just behind us, Bernhard – still temporarily in his civvies – hoves into view to listen in, joined shortly afterwards by teammate Brendon Hartley. It may seem relaxed, but there’s no doubt everyone at Yas today is taking this test VERY seriously. 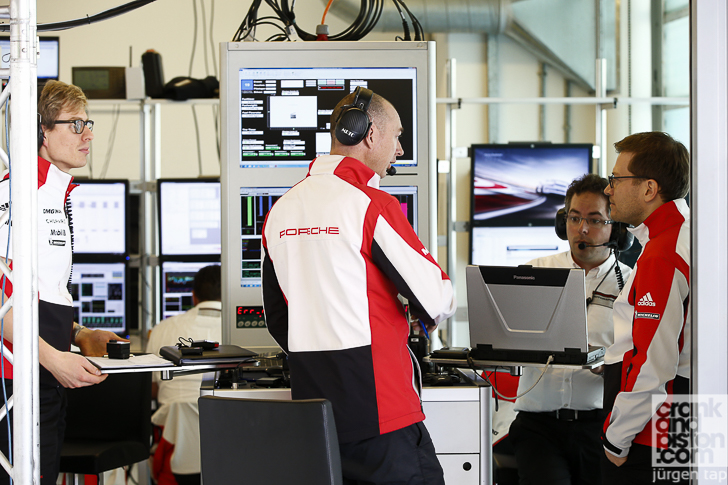 With good reason, since it’s not just the powertrain that’s been given a spruce. Weight saving has been crucial, given all the headaches that come with it: make the carbon fibre mounting of the gearbox too light and it will be too unreliable. Andreas ‘gleefully’ reminisces about the 919’s first official roll-out in 2013, during which a too-light crankshaft vibrated so violently at speed that a full re-design was required, threatening the roll-out altogether.

The chassis and suspension meanwhile remain unchanged, save a new front axle for improved traction and more flexible setup options. It’s a testament to the ‘carbon-fibre sandwich’ that Porsche first used in 2014 and has barely changed since, whereby the V4 – lighter and more easily accessible in its 90-degree banking than a flat-six – is integrated into the monocoque along with the transmission rather than mounted on top of it. All for the sake of torsional rigidity.