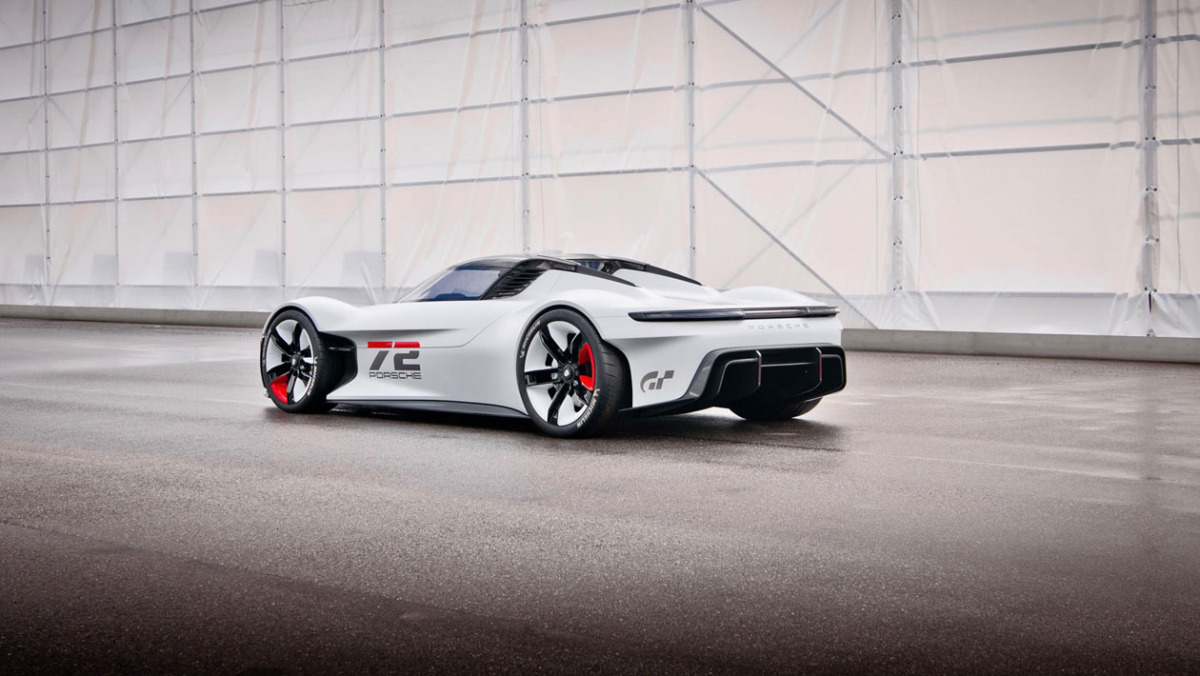 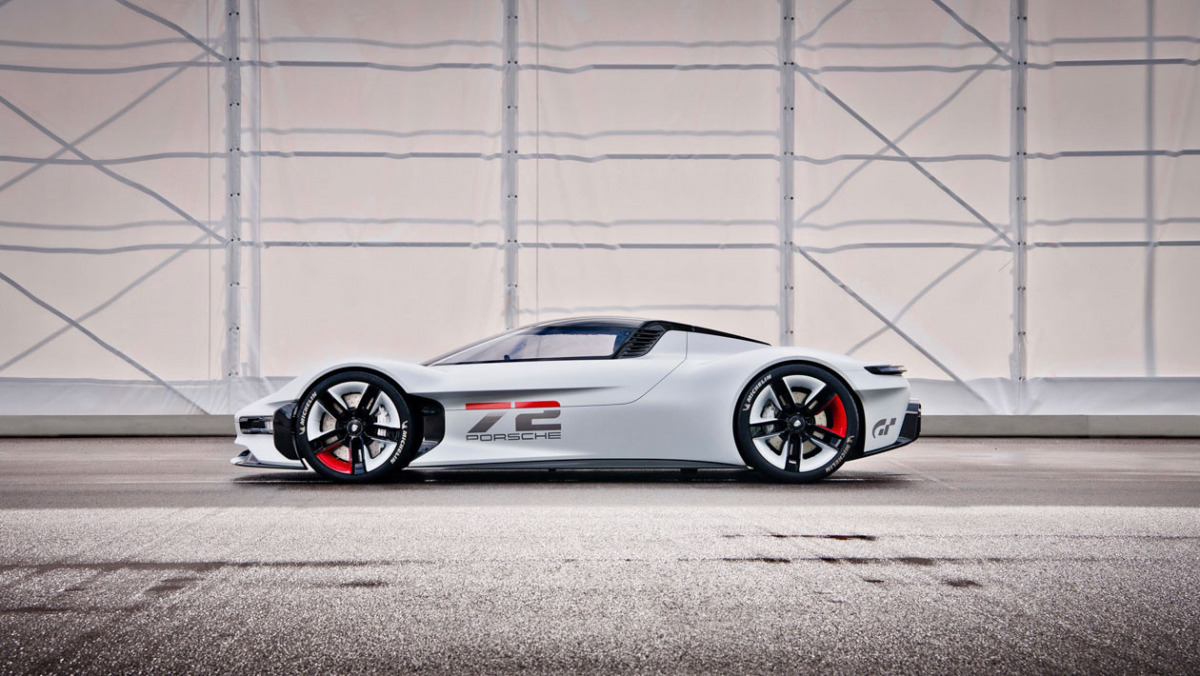 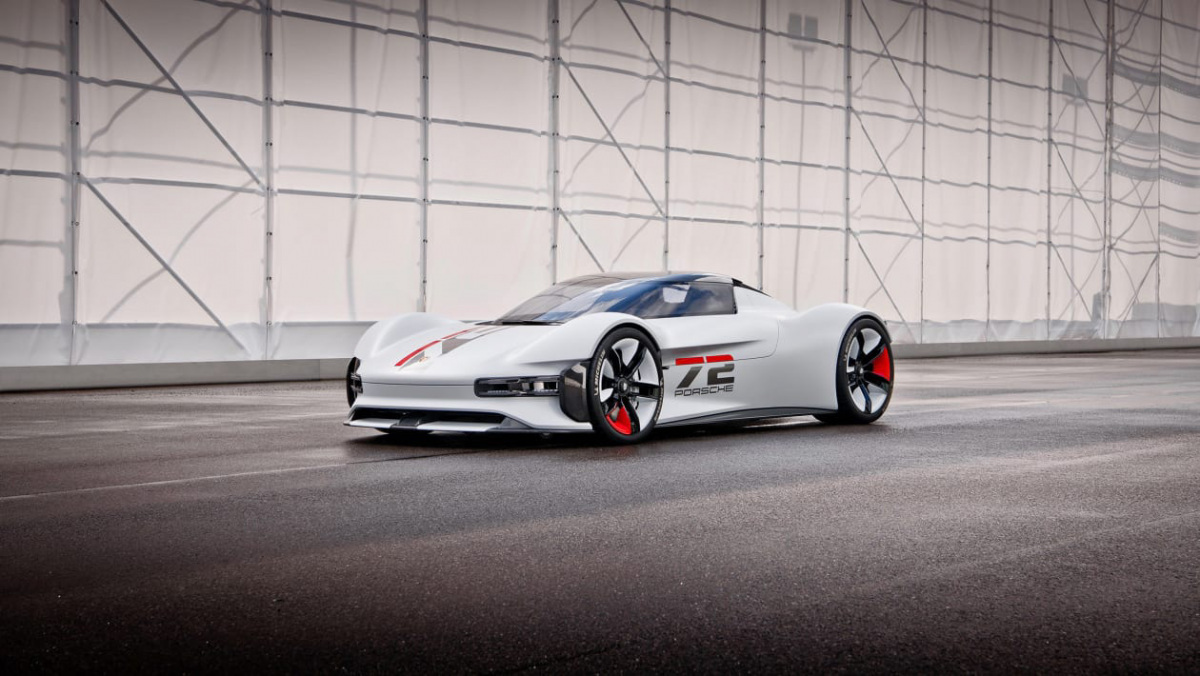 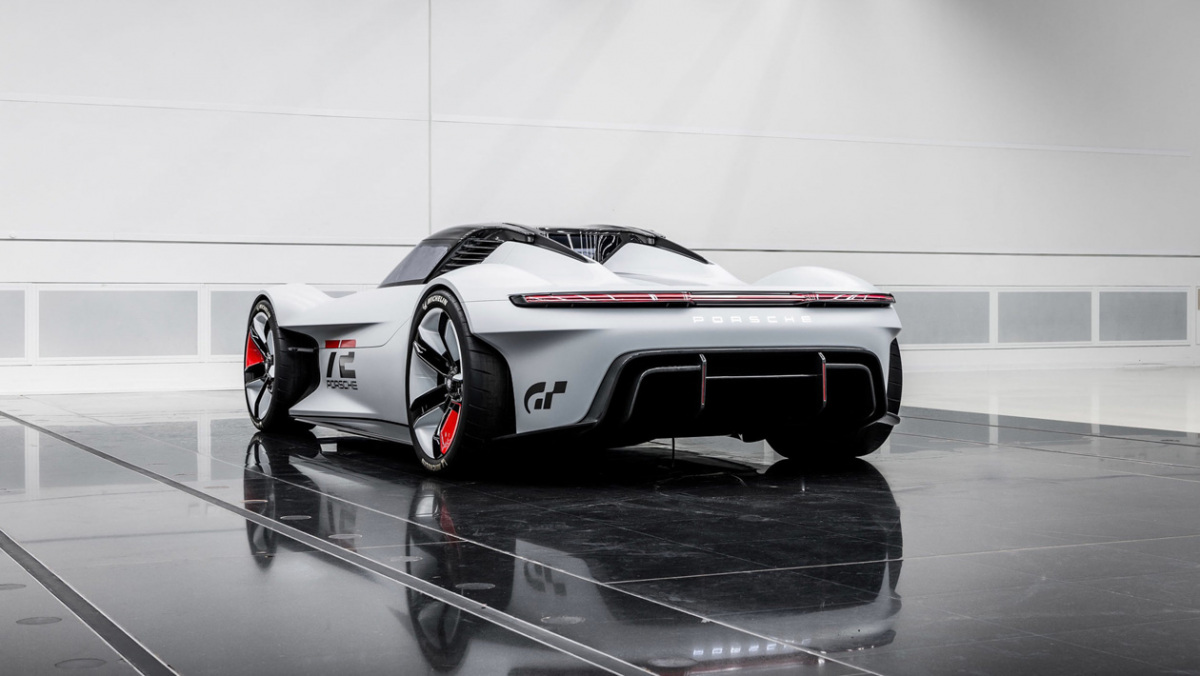 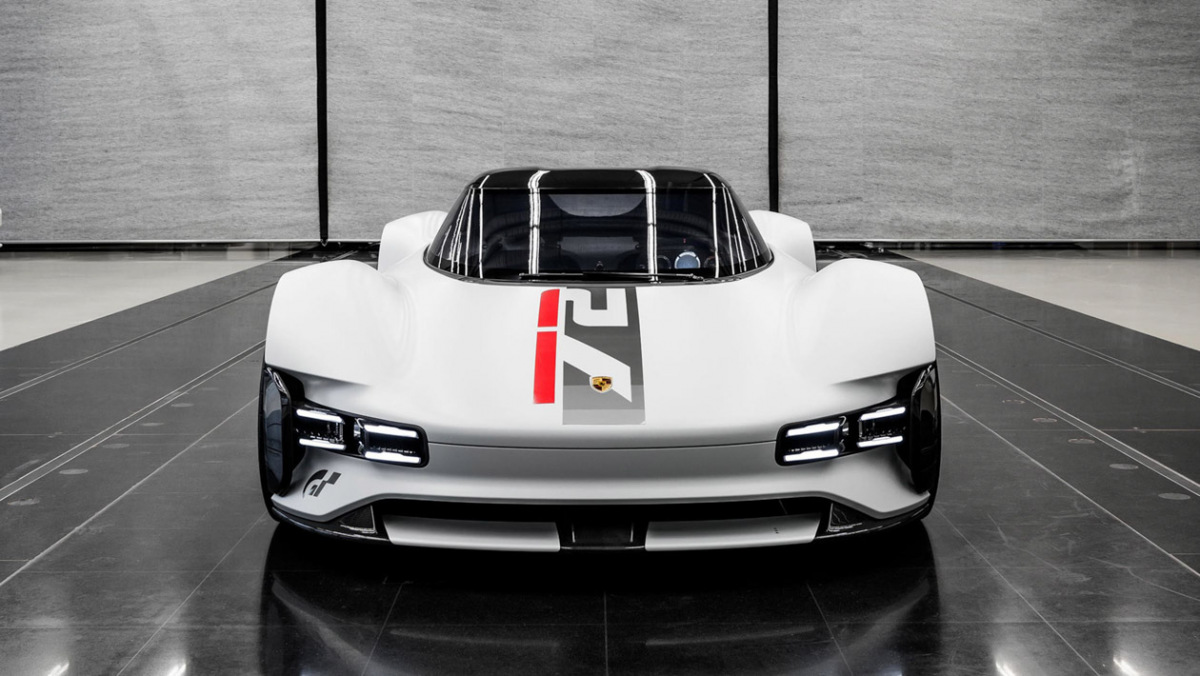 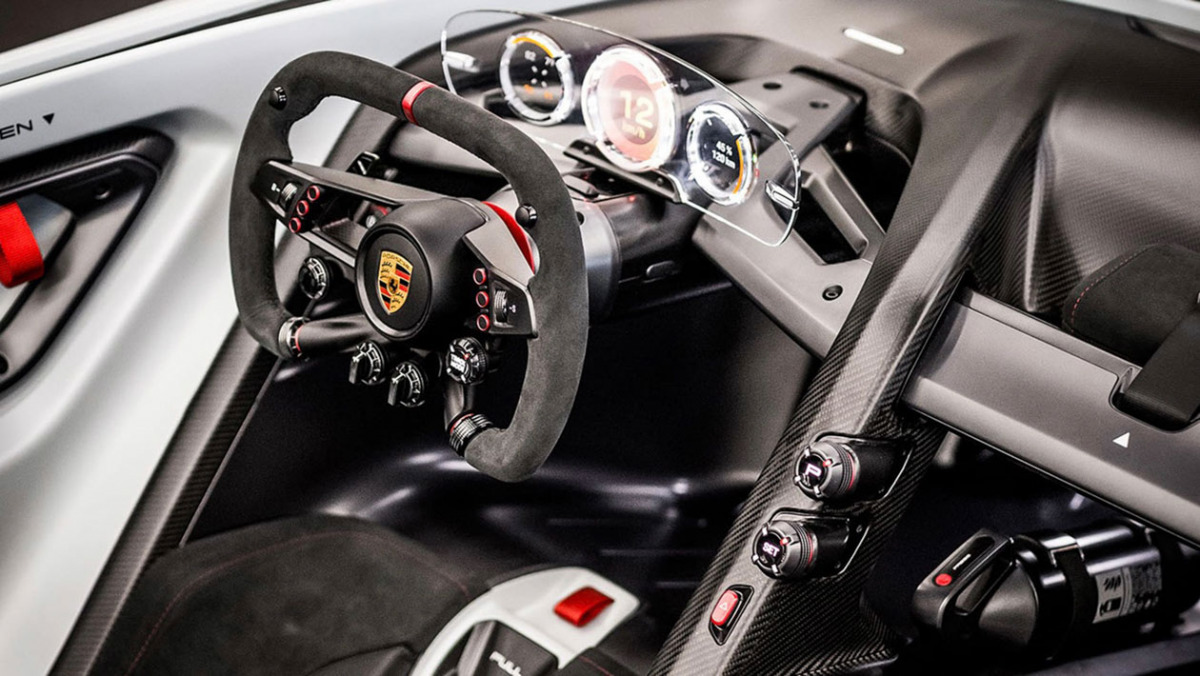 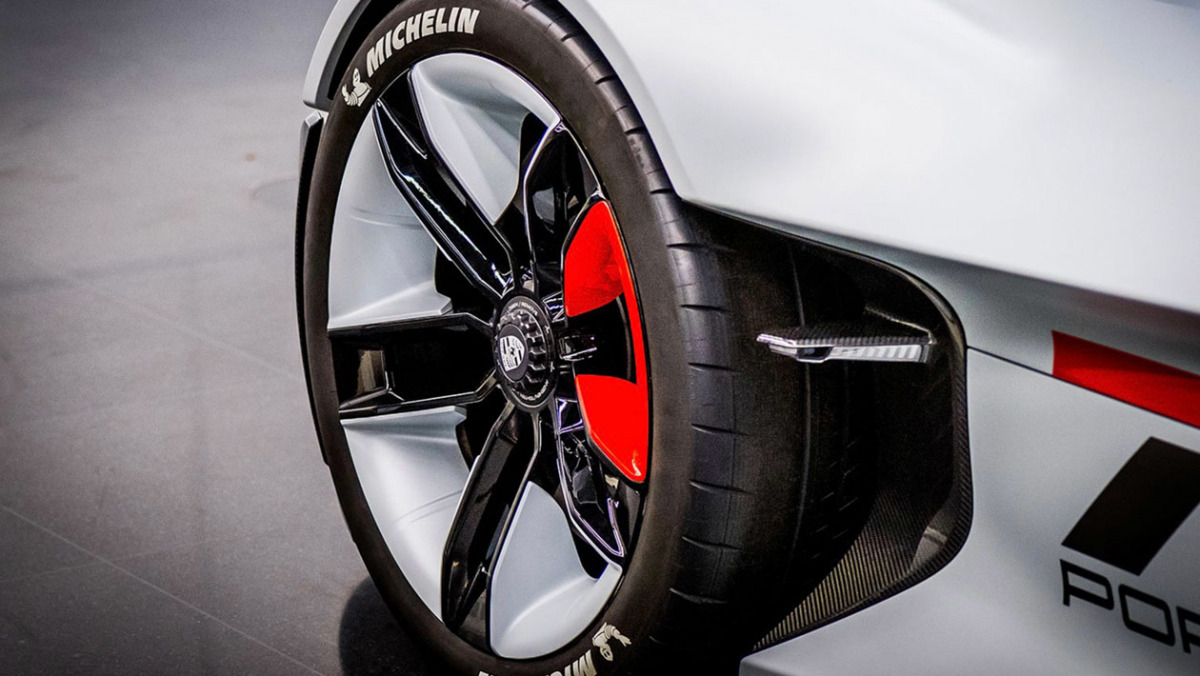 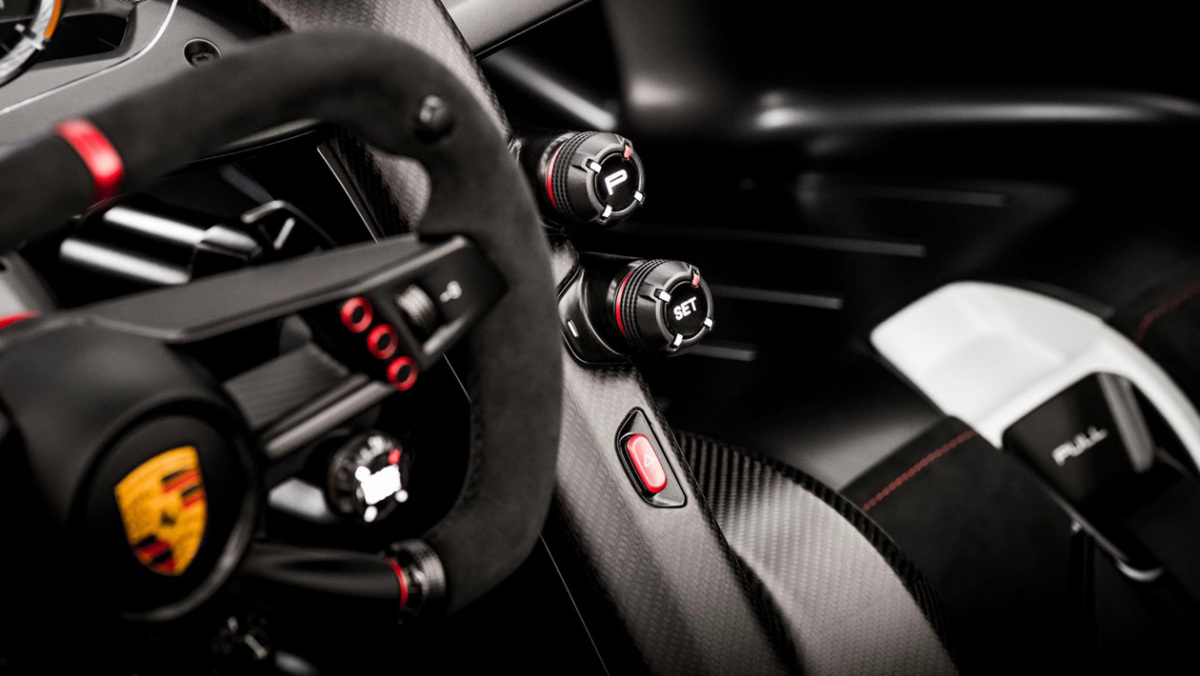 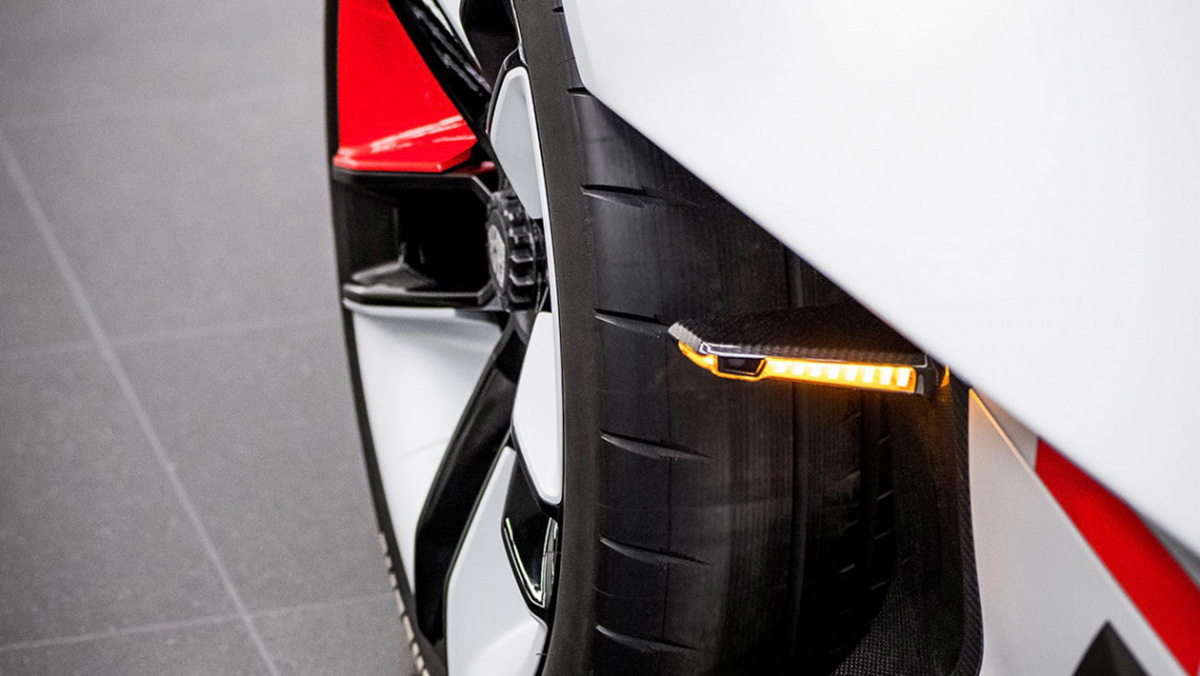 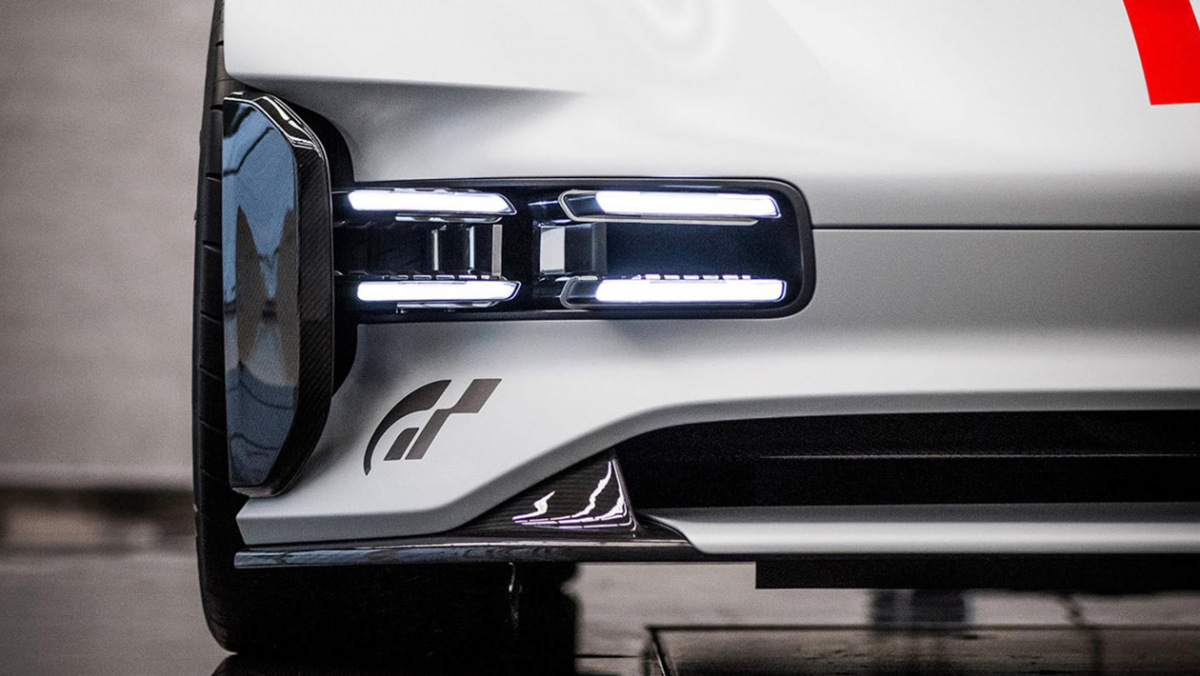 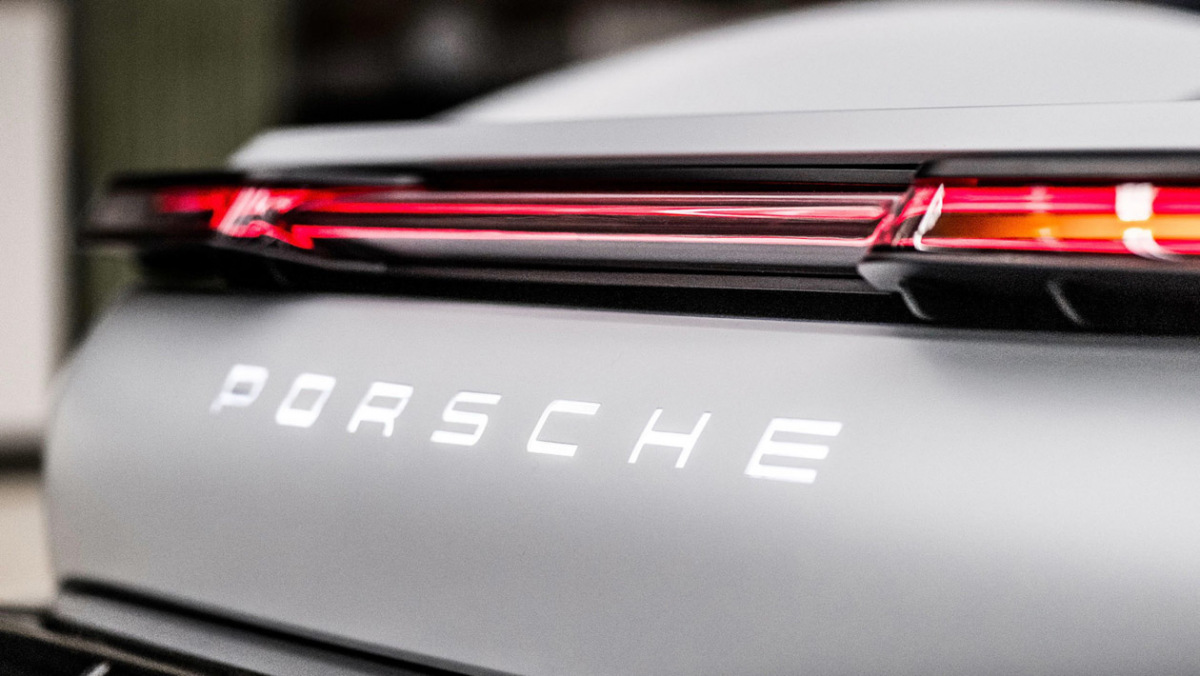 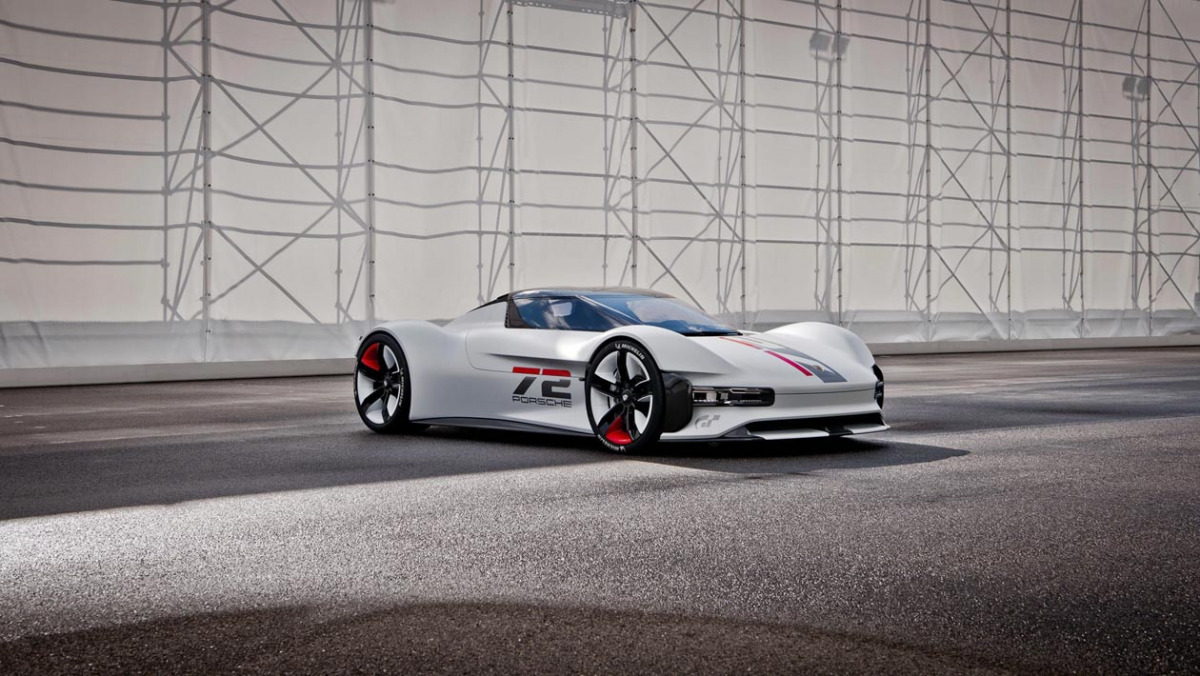 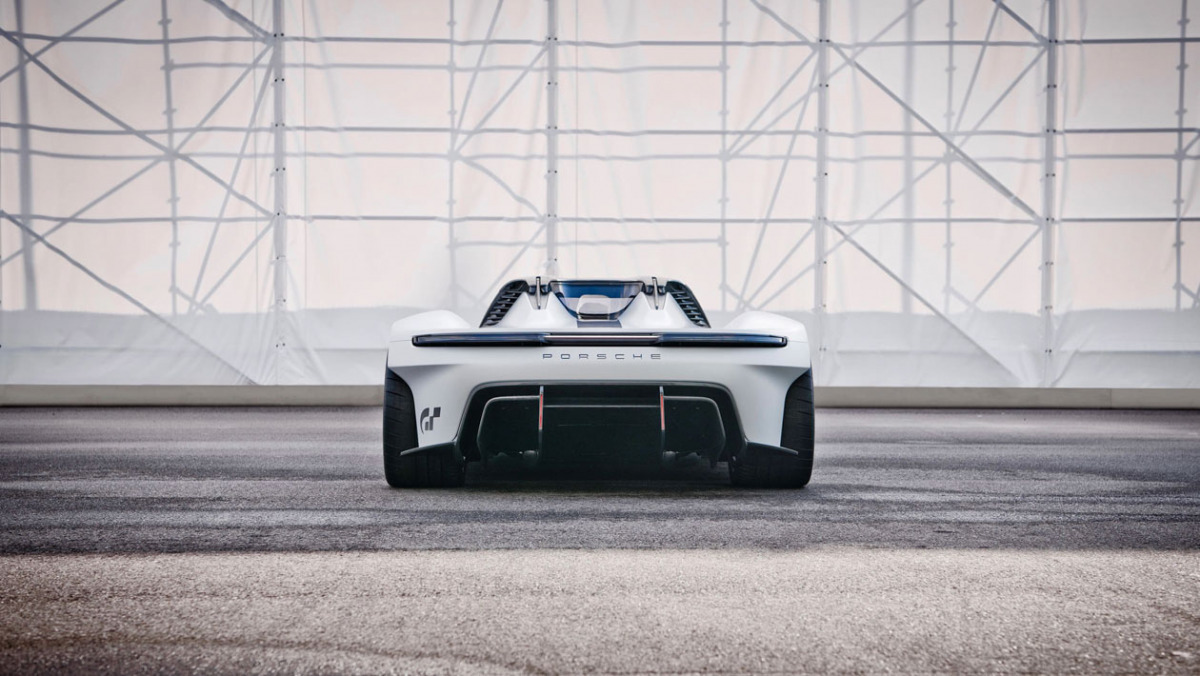 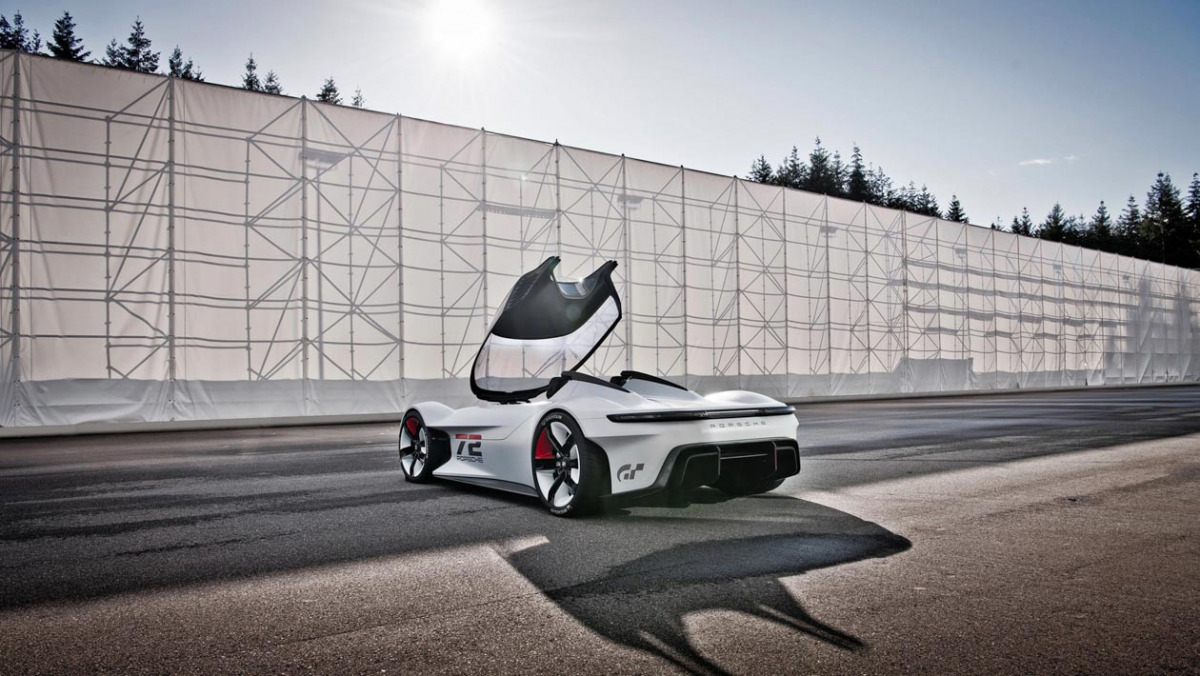 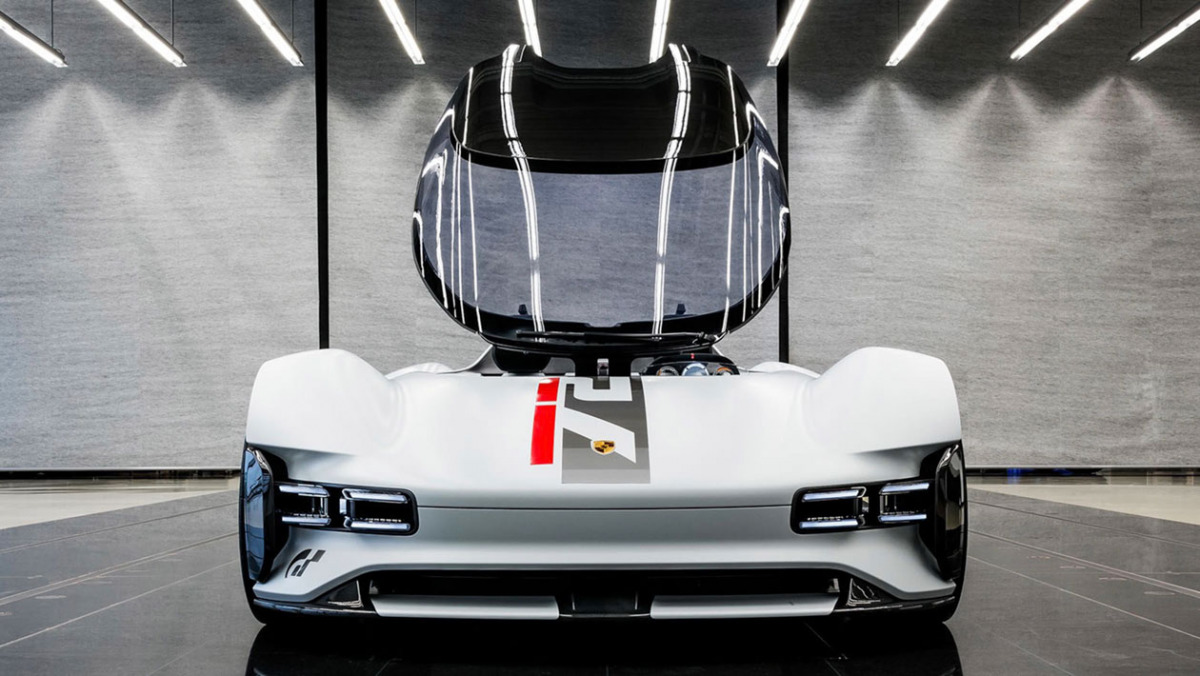 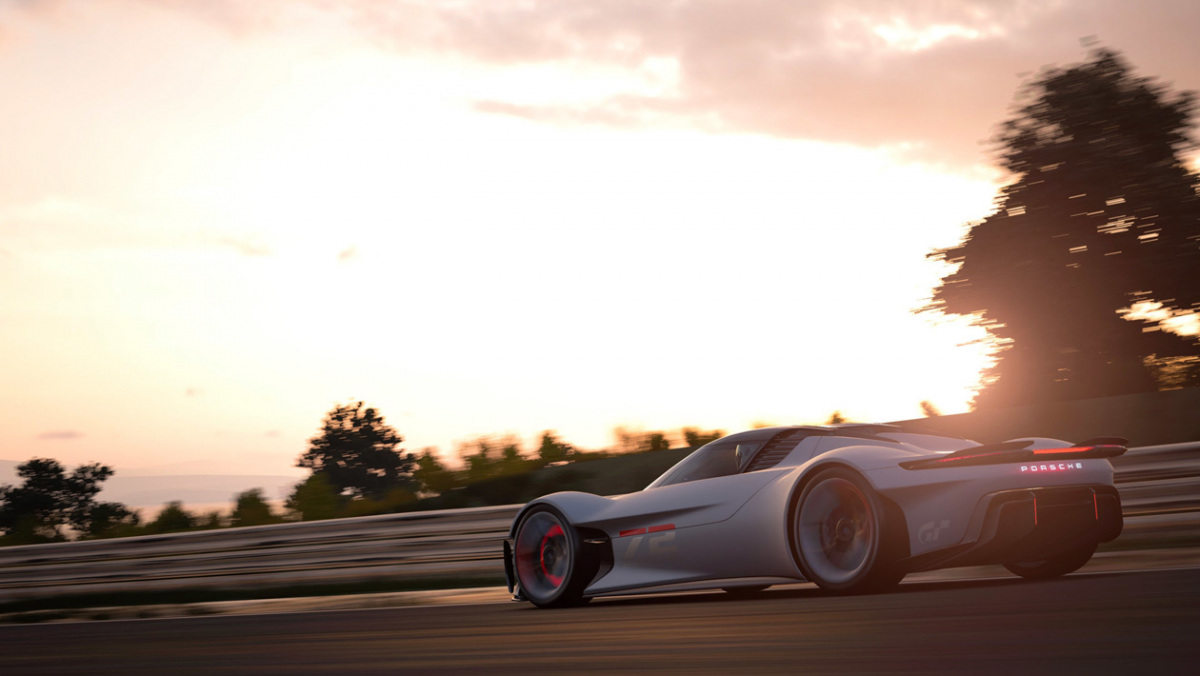 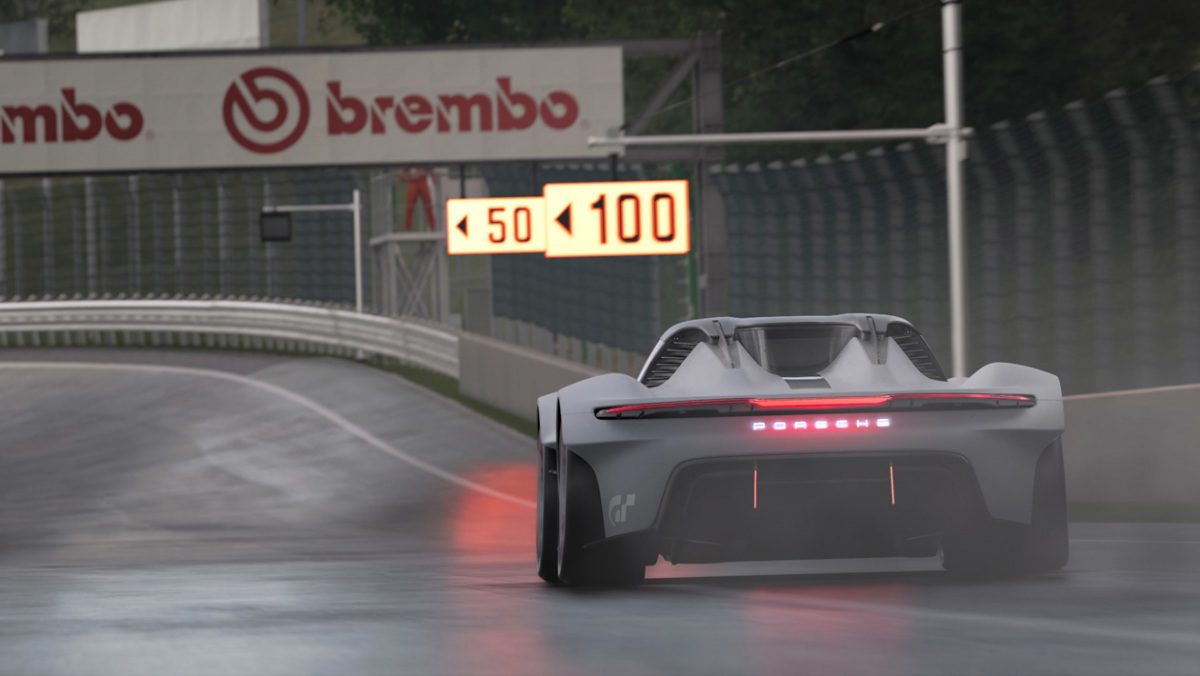 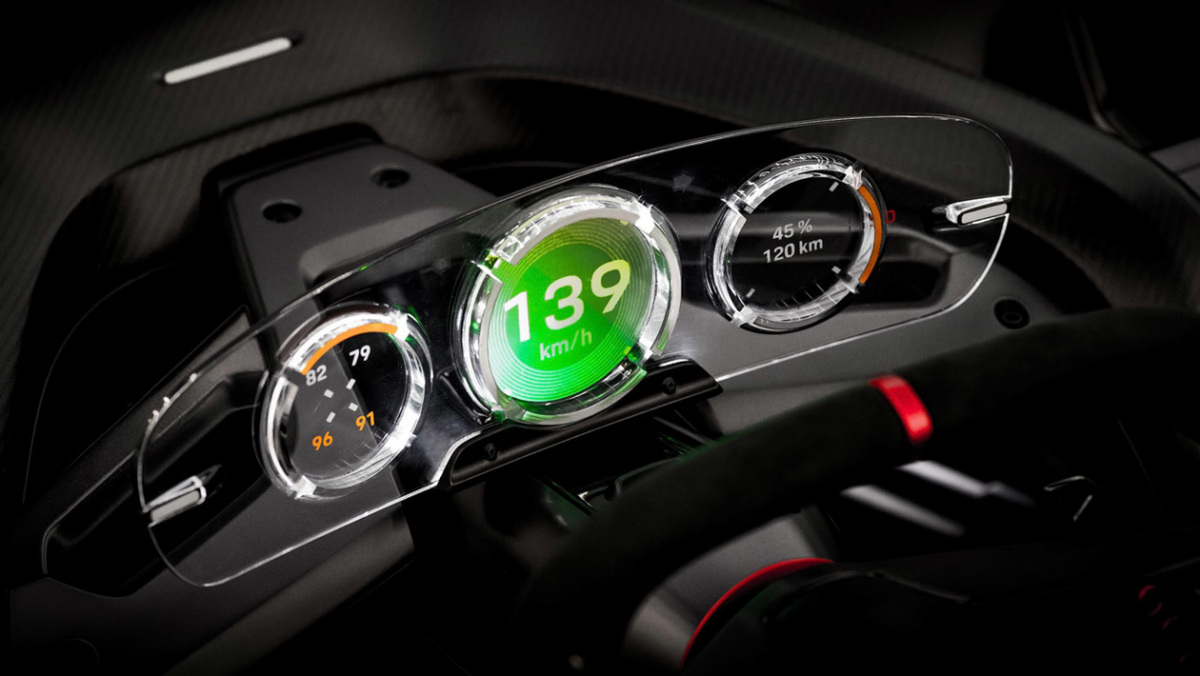 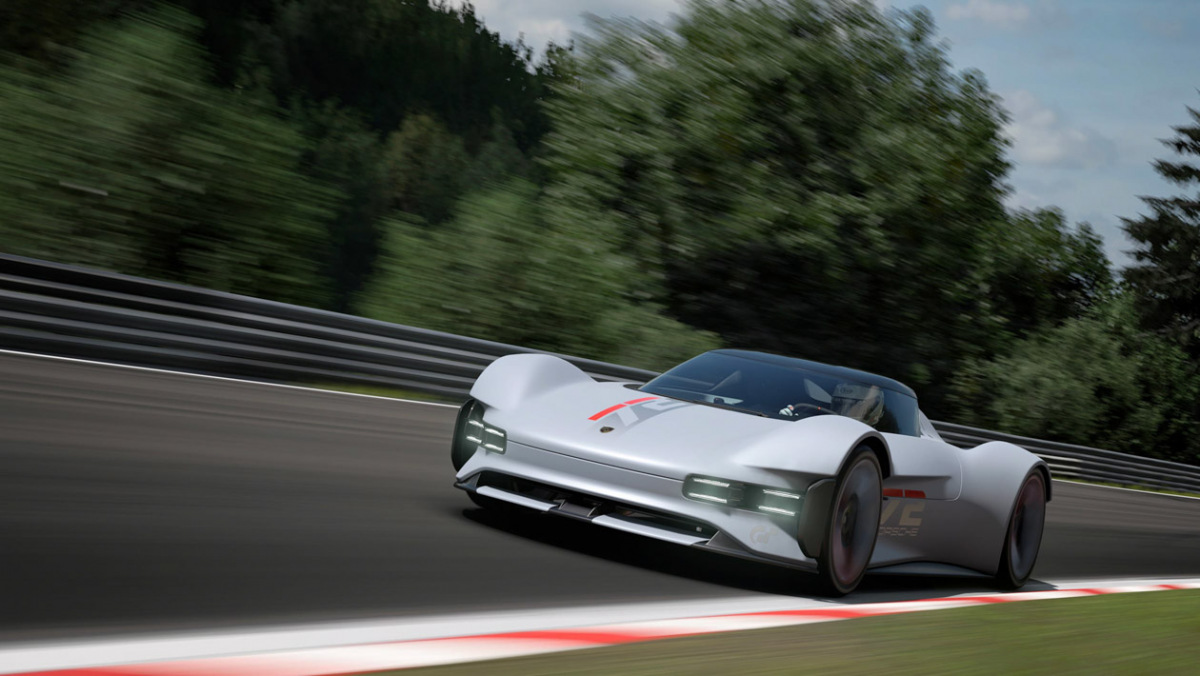 Taking the form of a low-slung two-seater sports car, this concept differs aesthetically from the otherwise similar Mission R Concept, visualising a more futuristic notion of an electric sports car. This starts with its extremely tight proportions that are much lower and wider than the Mission R, with significantly bigger wheels relative to the car’s height and an extremely narrow cockpit.

The nose is not defined by traditional lighting units as Porsche’s usually are, instead translating the four-point lighting signature into slim lower units that interface with aero devices which control flow around the front wheel arches. This lack of major lighting elements atop the Vision GT’s front wings have allowed Porsche’s designers complete freedom as to their shape and profile, which is tighter and less bulbous than Porsche’s usual designs.

Below the beltline, Porsche’s designers have taken away extreme amounts of volume at the trailing edge of the wheel arches both front and rear. Exposing the tyres in this way is a technique often used by race cars to reduce the internal pressure from within the wheel arches without needing to cut away vents into their tops like you’ll see on the latest Cayman GT4 RS.

Around the back, things look largely business as usual until you notice that for the first time, the rear light bar is not just a lighting element, but also forms a key part of the active aero package. That’s because the light bar is also an active wing that extends out at speed, itself with two further winglets that appear when the bar is deployed. This is the first time Porsche has experimented with using its iconic lighting signature as an aero device (in public, anyway) and signals what could be a fascinating line of development as both aero and lighting technology continue to advance.

But the elements that could find their way into future Porsches, both competition and customer, are more substantive than the wild concept details. Graphics such as the re-emergence of a visor-like windscreen and front aesthetic that was also seen on the Mission R could be something we see on a future EV sports car from Porsche, so too a further development of the inside-out wheel design that was first brought into production with the Taycan.

The interior is pure concept, displaying a pared-back aesthetic in carbonfibre and aluminium. A new element is the transparent instrument cluster – a clever hybrid of ideas between a heads-up display and traditional dial pack – which we suspect will be another line of development as technology progresses to support high-tech implementations like this.

Of course the good news is that unlike most concepts, everyone (with a Playstation) will have the chance to drive the new Porsche Vision Gran Turismo concept – even if it is just in the virtual world.

Previous ArticlePorsche Taycan GTS 2022 review – is this finally a fun to drive EV?
Next Article Nissan Z GT500 racer to take over from GT-R in Japanese Super GT 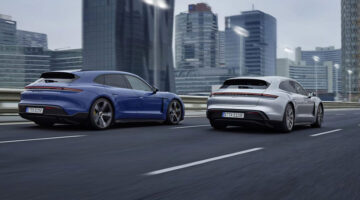