It’s official. Porsche is in development of a new endurance racer for the incoming 2023 LMDh class

Porsche will once again find itself fighting at the pinnacle of endurance racing from 2023 with the announcement it is currently in development of an all-new LMDh class racer. The news comes after Audi’s announcement to also join the series, which will race in global WEC and IMSA championships, and alongside the controversial Le Mans Hypercar class in Europe.

The team will be a full factory supported effort, with Porsche’s motorsport department still in the process of assessing possible customer racing opportunities alongside. Unlike Audi, Porsche remains committed to Formula E, and sees its involvement in the LMDh class as an opportunity to apply its plug-in hybrid development from both its roadcars and LMP1 projects into the new racer.

The LMDh class itself will be introduced from 2023, and race alongside the LM Hypercar class in Europe while also being homologated for the American IMSA championship races. The class has been developed to keep costs lower than that of the ferociously expensive LMP1 class, while also having a greater connection to road cars without the need of developing a specific road-homologated version to comply, as with Hypercar rules.

Porsche’s racer, as with all LMDh cars, will run a spec LMP2-based chassis from one of four global suppliers as per the regulations, but run a bespoke powertrain and bodywork. Porsche has confirmed the likelihood of its powertrain being derived from a road-car engine to keep costs low, which will then be joined by a specification hybrid drive unit shared between all LMDh racers.

Regulations stipulate a 671bhp total power cap, the same as the Le Mans Hypercar regulations, purposely designed to make the two classes competitive not just amongst themselves, but also each other. There will be also be a limit of one specific aero package for the whole racing calendar

So Porsche is back in, Audi’s also released its statement of intention, while the Hypercar Class has Toyota, Peugeot and Scuderia Cameron Glickenhaus strapped in and ready to go. After a few years with only one mainstream large-scale factory supported team at the leading edge of endurance racing, a new golden era might just be upon us. 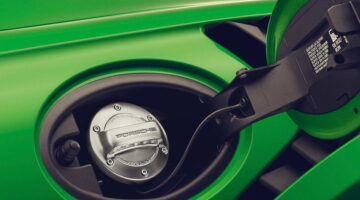 Porsche partners with Siemens Energy in development of eFuels