The first recce run reveals that although the road is fun, it’s not free from obstacles. Parts are covered in gravel discharged from trucks, and there are goats roaming the mountains either side that wistfully eye the tarmac. I don’t trust them not to leap in front of the SLS, which would be messy.

Within a few moments, my confidence in the SLS’ abilities grows dramatically. On the highway, it gave off an air of pure straight-line aggression, which made it feel like a muscle car. But after only a handful of bends, it’s clear that impression is misleading. Boy, can this thing hustle. The steering is fast, the response of the nose immediate. The front wheels might be a long way from my seat over the rear axle, but they’re fully connected to the cockpit and glued to the tarmac. It’s a weird dichotomy of large and small – that front end seems a long way away when you’re manoeuvring in tight areas, but once you open it up the car shrinks around the driver, and feels light and agile beyond the level a road car should be able to achieve. The big carbon ceramic brakes wipe off speed in an instant, but they’re beautifully progressive. Just as well, as 622bhp on these roads means on a couple of occasions I find myself arriving into corners quicker than I intended.

It’s still intimidating, especially on these narrow tracks. I’m reluctant to lean on it to hard, as Bassam had a short play in the SLS the night before and warned that it bites. As we’ll discuss later, this is not a cheap machine, and I really, really don’t want to bend it. There’s an intimidation factor at pretty much every level of driving in the Black, and one I think would take some serious seat time to get through, to start to really understand how the it operates at its limits. 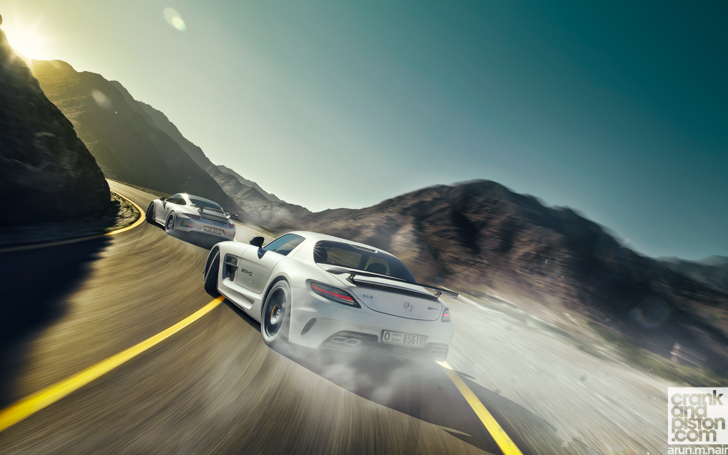 I’m intrigued to know whether the 911 feels similar, and Bassam and I swap to compare notes to far.

“On first impressions, on the highway, it doesn’t feel as special as old GT3s do, it just feels like a normal Porsche,” he says. “But very quicky you realise it makes an amazing, very special engine noise which couldn’t be any more different from the SLS, and it pulls away like an animal. The paddles feel great but I just discovered the shifter, which is brilliant. It makes you feel like a touring car driver, and it’s the right way around; towards you for upshifts and pushing away for downshifts.”

Intrigued, I get in. Immediately, I feel like I’m sitting too high. The SLS’ buckets are right on the floorpan, where the 911’s are in a still-low, but more practical position. It takes a few minutes to get used to it. I twist the key, in its familiar 911 place on the left of the steering wheel, and keeping all the settings on standard, pull away. For the first few corners, I don’t see what the fuss is about. Sure, it’s quick, but it doesn’t really feel much quicker than a regular Carrera S. This is the first GT3 I’ve been in, and I don’t see what the fuss is all about. Are the hardcore GT3 fans, who loudly bemoaned its gentrification and lack of a manual gearbox compared to previous incarnations, onto something?

And then I hit a long straight, and for the first time let the revs climb. And above around 6500rpm, a different side of the Porsche emerges. The regular sports car warble starts to transform, hardening into a scream as the scenery outside lengthens. OK, I start to see the difference now. Confidence is pretty inherent in the 911, so stable does it feel at all times, so I’m leaning on it far earlier than I was in the SLS, and my word what weight it can hold. The steering feels lighter than in the Merc, but the front end is just as planted, if not quite as communicative. The GT3 really whips around tight corners, helped by rear wheel steering that appears on the 991 for the first time. 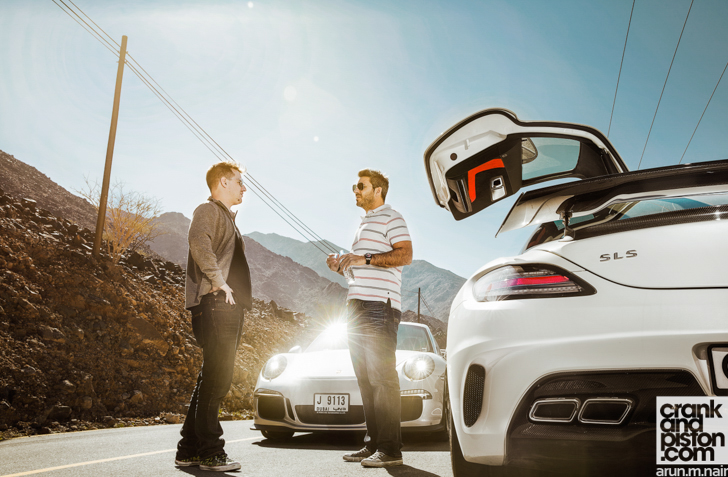 A few bends later, I realised I’m shifting at around 7000rpm – I still have the best part of another 2000 to play with. It seems counter intuitive to stay on the throttle for so long before pulling back on the stick, but I battle the urge and hear the engine scream harder, scratching its lungs with a metallic howl that, to my uninitiated ears, sounds almost painful. But boy does it move, and boy does it feel absolutely nailed down while it does it. Nothing shakes it – I start taking what I think are liberties, throwing it into corners faster, getting on the gas earlier, but it soaks it all up, diving in and hooking up immediately on the way out without even a shimmy.

We reconvene for a discussion. Phil’s off taking pictures with snapper Arun, so it’s down to Bassam and me to discuss our findings. I’m intrigued to know what he makes of the GT3; as a Porsche owner, he wasn’t keen on the standard 991. What does he make of this?

“This has restored my faith,” he says. “It still has plenty of character; not as much as before, but it’s still there and it’s absolutely planted on the high-speed sweepers. It’s maybe overly grippy – maybe I’m just on it enough yet but I’ve not had a single wobble from the back or front, and a road like this I’m not comfortable pushing more than I am at the moment.”

Bassam is also well placed to judge the SLS, having driven the genuine SLS GT3 racer a couple of years back. His opinion? “It feels as close to a race car as you can get; the sense of drama and the fact that you really have to work at it and think of what you’re doing. If you closed your eyes and stuck slicks on it, I don’t see it feeling all that different. The 911 is scalpel sharp and dissects the road, but the SLS has the grin-factor. Owning a car is not these drives though. The GT3 comes alive on these roads but it’s a lot less dramatic for the everyday. It’s remarkable how multifaceted it is.” 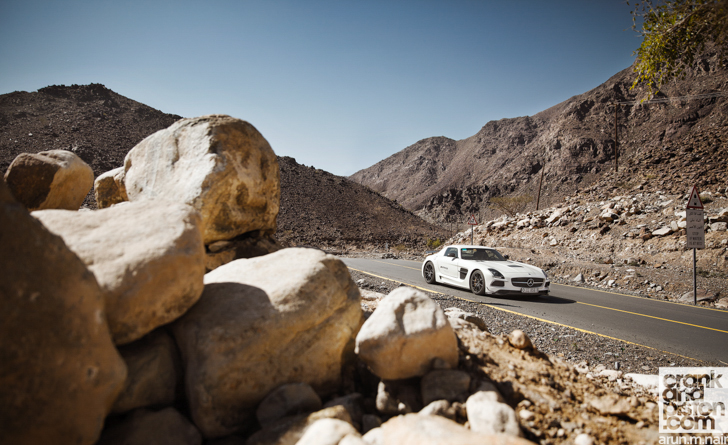 I find myself in agreement. Today, on these roads, I’ve been blown away by the SLS Black Series. It is, as Bassam points out, as close to a GT3 race car as it’s possible to get on the road. It takes the already decent standard SLS and reinvents it – honestly, they’re like chalk and cheese, and the Black Series is dramatic and exciting every time you get into it.

The Porsche, conversely, is outstanding when pushed hard but feels like a regular 911 unless you’re cranking that flat six up to its full screaming climax. There’s the very reasonable argument that, for everyday use, this is the car to go for – I know from time in a Lamborghini Aventador that the “always insane” vibe gets pretty tired pretty quickly. Still, after our few hours in both cars, I’m in love with the Mercedes, whereas I’m “merely” impressed with the Porsche.

But in the real world, you’d have to factor in price. The very real fact is that at $133,817 you could buy two 911 GT3s for the cost of one SLS Black Series, which is a wallet-melting $281,900. While the Merc is outstanding, there’s no way it’s twice as good as the Porsche. An impromptu drag race on the run back to headquarters shows that in a straight line, the Mercedes is ever so slightly quicker, but there’s hardly anything in it – both are absolutely blistering.

Ultimately, what car you prefer depends on your persuasions. If price, everyday practicality and not showing off too much are a factor, then the Porsche seems the obvious choice – it’s a superb machine that retains huge amounts of excitement and even more performance. But if these criteria are not considerations, then it’s really hard to find fault with the SLS AMG Black Series.

– Our thanks to Jon Simmonds.

Previous ArticleBMW E30 325. New arrival. Journals
Next Article The Vandoleros: Can You Dig it! eGarage