crankandpiston.com takes time out to drive a deliciously rare 1993 3.6 Turbo S Flachbau (Flat Nose), one of only 76 ever made

There are Porsches. Some of the world’s most respected sports cars. Some of the world’s best SUVs. Symbols of excellence and achievement. Bywords for dynamic prowess. And then there are Porsches. Classic cars shaped by decades of evolution with a singular focus – the betterment of what went before. Air-cooled objets d’art, collectors’ items, symbols of a time before satellite navigation, Porsche Stability Management and the Macan.

Vintage Porsches, particularly variants of the classic 911, have been skyrocketing in value in recent years, driven by reminiscence among collectors for a time before technology overtook feel and driver involvement. The rarer a model, the better.

This is one of the rarest of the rare. It’s a 1993 964 3.6 Turbo S Flachbau (Flat Nose), one of only 76 made with that distinctive front end. Just 12 were built in right-hand drive, and this one was owned by one of the world’s most prolific car-collecting dynasties, the Brunei royal family. It has just 1014km on the clock. And I get to have a go. 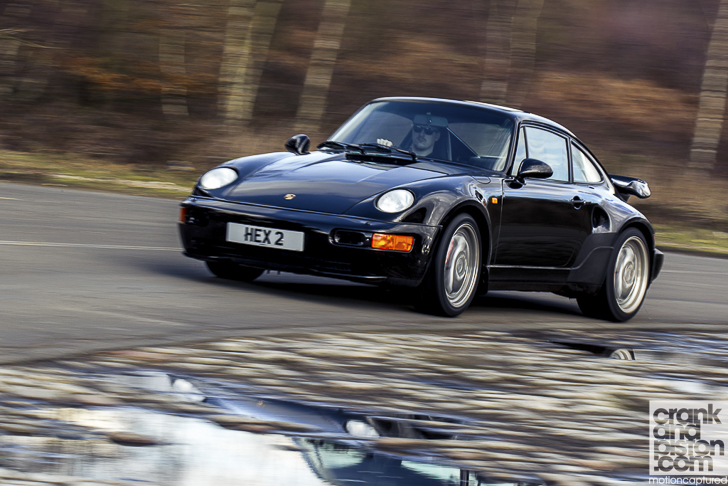 The car was acquired from a source in Brunei and will be sold by UK dealer Hexagon Classic, a noted specialist in classic Porsches. Chairman Paul Michaels is, in his own words, “a Porsche man through and through,” having owned Stuttgart’s finest since the mid-1960s. So it’s no small thing when he says: “This is absolutely at the top for a Porsche collector, it’s as good as it gets; one of the most important Porsches we’ve ever bought.” The car was sold direct to Brunei from Porsche, but Paul suspects it was largely forgotten soon after, as indicated by the mileage and the condition in which it was found.

“It was very tired, from being in an underground garage and I doubt it had ever been cleaned,” he says. “But once it was clean, what you see if what you get, because it had never been anywhere. We never had to do anything material to the car, it’s a literal time warp.”

Originality is hugely important to classic car collectors, but the price for that is often a slight shabbiness that inevitably comes with use of the car. Not so in this machine; it’s difficult to find an area that doesn’t look like it just came out of the factory. About the only sign of its 23 years is a slight bit of rust on bolts holding the rear seats together; the black paintwork gleams and the leather seats are free from cracks.

Even if it weren’t in tip-top shape, it’s a visual classic, and it’s made all the more interesting by the flat nose at the front. The Flachbau option was secret one, according to Paul – customers had to know it was available, as it wasn’t advertised on the extras lists. As a result, it’s extremely rare, which makes an already valuable car even more so. 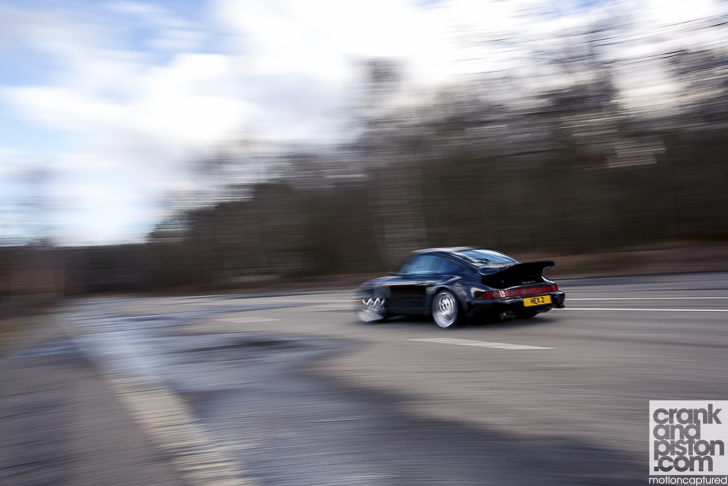 So what’s it like to drive? Settling in is both familiar and yet slightly strange. As someone used to modern Porsches, it’s clear that the cars of today are heavily influenced by those of the past, and despite being 22 years old the shape of the cabin and the features seem familiar. The five dials on the dashboard and the bold central tacho are instantly recognisable, but it’s also clear how much things have changed. Visibility is tremendous, as the A-pillars are far thinner than on modern cars, and I find myself shuggling in the snug leather seats to get used to the pedals, which are offset heavily to the left,

A twist of the key fires up the 3.6-litre flat-six turbo at the back, although it takes me a moment to find the ignition. Left-hand drive cars take the key to the left of the wheel – a remnant of their placement in Le Mans racing cars of old – but right hookers are mirrored, so the key is in a more normal place. That’ll teach me to try and look knowledgeable.

“But, photography complete, I’m forbidden from any more dynamic time in the Flachbau: ‘If this car had 80,500km on it, it would be worth less than half its value today’ “

As might be expected for a rare, valuable and low-mileage car, my time is limited and well chaperoned, and the hour or so on-track is largely restricted to a slow pootle behind the camera car to get the shots you see here. But while trundling up and down as photographer Tim Brown gets the right pictures, I can’t resist the urge to get a hint of what this rare breed can manage. As I thread it around the handling track as nimbly as I think I can away with, the messages through the steering wheel come heavily textured and accompanied by a decent heft, and nary a trace of roll body. The Porsche feels full of potential; a feeling only exacerbated when I open up the throttle. An imperceptible glance upwards, a squat and an age-old flat-six bellow comes as the rear tyres compress and flatten across the rough tarmac. Acceleration is visceral and serious, even by modern standards. This car had the optional X88 performance package specced when new, which takes power up to 385bhp, and it feels like all the horses have remained in the paddock over the years. The initial push on acceleration is decent enough, but dare to get the turbo involved at around 4000rpm and the rubber at the back of the car strains to hold on to the surface. After almost a quarter of a century, this thing still really shifts. The brakes are firm and responsive, the pedals perfectly placed for a quick heel and toe downshift and the gearstick throw stout and short. It’s hugely engaging, and I’m keen to stay in the driving seat for as long as I can. 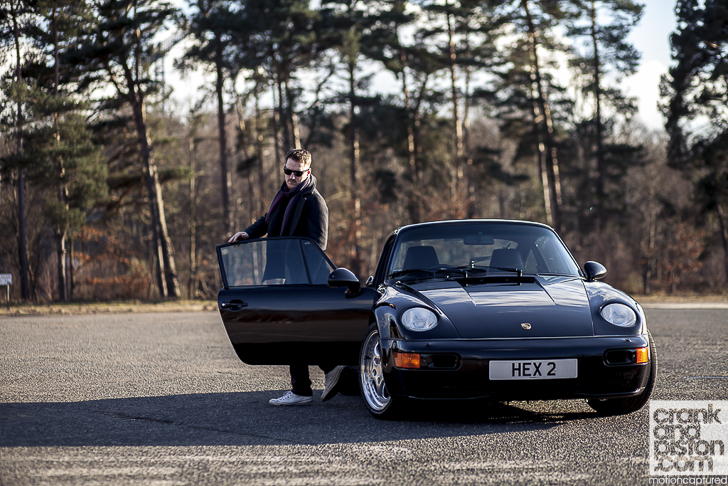 But, photography complete, I’m forbidden from any more dynamic time in the Flachbau, which is probably for the best – Hexagon won’t want to put any more miles on it than they have to. “If this car had 50,000 miles (80,500km) on it, it would be worth less than half its value today, even considering the rarity of it,” says Paul Michaels, “because it no longer carries the importance of a low-mileage vehicle.”

Will the future owner of the car drive it, or is it destined to be kept solely for visual pleasure? It would see a shame not to use the 964 for its intended purpose, but it makes much more financial sense to keep the odometer as low as possible. Paul says it could go either way. “Potential customers divide into two categories. You get the person that buys it and thinks, ‘sod it, I’m going to use it’. They won’t put silly miles on it, but maybe 1000 miles a year. Then you get the person who treats it like a piece of jewellery and won’t ever use it.”

Whoever decides to shell out the estimated £400,000 ($570,000) that Hexagon Classics is asking for the Flat Nose is unlikely to rush into a decision, even if they have that kind of money easily to hand.

“Very rarely will this fly out of the showroom;” Paul says. “It’ll likely take months to sell because people are very careful, and this is one of the most important Porsches we’ve ever bought.”

*Our thanks to Hexagon Classics and Tim Brown