They’re aimed at different levels of motorsport, but what exactly separates Porsche’s 911 RSR, GT3 R and GT3 Cup models, and what are they like to drive? We’re about to find out 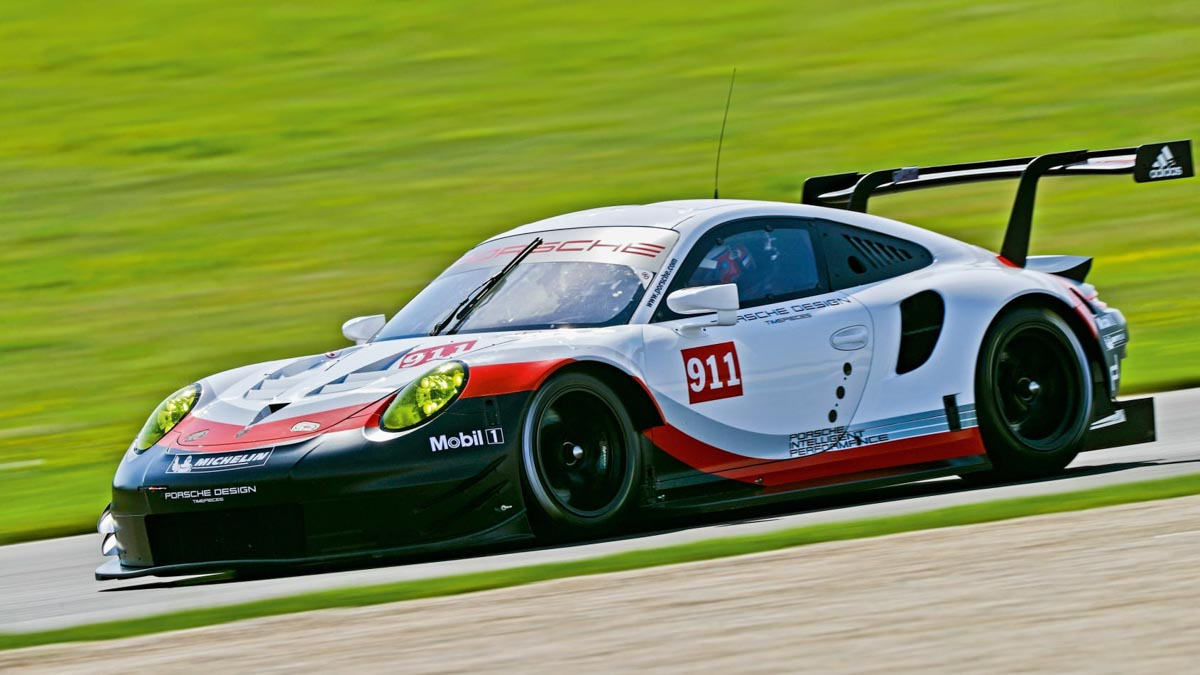 The Porsche 911 GT3 is a model held in the highest regard to us for many reasons, but there’s an underlying trait common to all that has thrust the model into greatness since its it was introduced in the 996-generation 911. Motorsport, and more promptly its direct correlation to it has kept the recipe pure, given the brand gravitas beyond the likes of which rivals from AMG have been able to match and created a template to build what has consistently been one of the finest driver’s cars on the road.

Before we get ready for a whole new generation of GT3, we had a go in three current-generation Porsche GT models from different racing series’ to see how they compare to each other, and the road-going GT3 and GT3 RS that continue to define performance car greatness, starting with perhaps the most extreme Porsche GT racer of all. The 911 RSR.

Should I wear earplugs? That’s the question. I’m only getting a short stint in this 2017-season Porsche 911 RSR, and I suddenly feel as though I might look like I’m taking myself a bit too seriously if I produce a pair. I ask the mechanic what he thinks and he shoots me a look that says, ‘Are you mad, Englishman?’ Earplugs it is.

Thank heavens I brought some. If you’ve been to a WEC round over the last couple of years you’ll know that the naturally aspirated 4-litre 911 RSR is a beacon of sonic purity and violence in a field of cars that, largely, sound rather uninspiring. As I go through the starting sequence and thumb the starter, the flat-six barks into life just over my shoulder, and it’s louder at idle in the cockpit than a road-going 911 GT3 at the red line. That loud.

The GTE-class 911 RSR has that exotic aura that tends to surround factory team cars out of Weissach. It’s clearly much more than just a highly developed 991: most obviously the engine is moved to a spot just in front of the rear axle, but it also uses double wishbone front suspension instead of the usual MacPherson struts and even the seating position is moved inwards to provide more protection to the driver.

You might think moving the engine was all about chassis dynamics, but it has as much to do with aerodynamics as anything. The GTE rules specify the scope of the rear diffuser, and they dictate that you’re not allowed to have long tunnels protruding far out the back of the car. But with a 911 the position of the engine means there’s no space for large tunnels under the rear of the car itself, unlike with its mid-engined rivals from Ford and Ferrari, hence the engine being shifted forward. Moving the engine has also allowed weight to be moved back from the front of the car, concentrating it more in the centre. The RSR is not only faster, it’s kinder on its rear tyres, too.

Earlier, Kévin Estre, a man who, as I type, has just overtaken a rival at the N24 while partly on the grass in his 911 GT3 R as he approached the Döttinger Höhe at some 290kph, took me for a quick blast to learn the Lausitzring infield circuit. Our car of choice was a silver-with-green-stripes 911 R, which Estre, who has all the self-confident cool you might expect from a French professional racing driver driving for the Porsche factory, hurled around while dispensing advice with suave disinterest. Now it’s my go.

The throttle is as sharp as a para’s bayonet and the clutch unforgiving; it’s fine if you have the knack, but I don’t, and I stall, punching the ‘six’ back into life and then lurching away as we RAH-RAH-RAH down the pitlane. As soon as we’re clear and onto the circuit I snap the throttle wide open and the RSR explodes forward with a barrage of noise. With around 503bhp despite an air restrictor, and a certified minimum weight of 1243kg, it’s very quick, but not eye-wateringly so in its intensity. No, the real beauty of the package is everything else it does.

GTE cars are allowed traction control, but not ABS. The RSR’s powers of retardation are Herculean, but there’s a sequence of lights on the steering wheel that tells you if you’re close to locking the wheels. With each lap I hit the brakes harder and harder, bleeding off the pressure slightly as we reach the corner’s turn-in point. Turn One is a case in point: a blast along the oval’s start-finish straight, motor screaming and shift lights on the steering wheel blinking, then a slow left onto the infield. It feels so good to attack this corner, the RSR turning in with an immediacy and confidence that sums up everything good about the car. I simply can’t believe how easy it is to drive. Sure, I imagine if you push it to the very limit of its capabilities – and I’m not afraid to admit that as these are my first six laps around here, and I’ve had a kindly but nevertheless stern request not to bin it, I’m not even going to attempt that – it has its edge, but not one that’s obvious right now.

Instead, I’m revelling in the stability, the clarity of its communication, and the sheer grip on offer; every control is perfectly weighted and moves with an oily, exacting precision that is the preserve of a bespoke, money-no-object frontline factory racing car. It’s glorious, and I feign innocence at sneaking in an extra lap after the pit board is hung out. It’s a drug and I need more: a few stints over 24 hours should do it.

In many ways this GT3 R (a 2017MY version, since replaced for 2019 by a new car still based on the 991 shell) looks every bit as angry as the RSR, exuding combative menace, but it’s actually quite a different animal underneath the giant wing, jutting splitter and copious vents. It’s obviously much more of a 911 for a start: the interior is almost as purposeful as the RSR’s, and the car wails and chomps as we stutter down the pitlane, sequential gearbox screaming above the bark of the flat-six, but the engine is where you’d expect it to be and the seating position is less alien. It’s not difficult to see it as a logical extension of a 911 GT3 RS.

GT3-spec cars are aimed, by and large, at wealthy amateurs, run mainly by private teams and, in addition, are equalised in their performance relative to rivals by the dreaded Balance of Performance matrix. Those amateurs often hire hot-shoe youngsters as their teammates, who battle for tenths in cars which are hard for pros to make a difference in through their talents alone.

With this remit in mind, the GT3 R has both motorsport ABS and traction control systems, and is deliberately set up to be friendlier near the limit. On track it’s immediately confidence inspiring, not least because the braking technique even from high speed is to simply mash the pedal as hard as your calf muscles will allow. I don’t think I get anywhere near the pressures required, which a friend who’s raced GT3 machinery professionally for years says would require me to get down the gym pronto. And stay there.

With around 500bhp there’s little difference in outright speed from the RSR, but the weight transfer is predictably more obvious, given the R’s engine placement. It’s great fun, though: accessible in a way that makes the itch of wanting to race almost unbearable. Commitment under braking is rewarded, and you can then really be aggressive with the throttle thanks to the combination of rear-engined traction and the traction control safety net.

As is normal in the world of motorsport, an arms race means that GT3 cars have become increasingly specialised, and the 2019 GT3 R inherits some key components from the RSR, including double wishbone front suspension, more sophisticated electronics and aero, fuel fillers on both sides of the car and an engine with more mid-range torque. Various options on top of that enable you to tailor the car to particular race series, and to upgrade its electronics further still with additional data links, tyre pressure monitoring and so on.

The ‘Cup car’ is by far the humblest of our trio, both in looks and technical specification, but it makes almost as much power (478bhp) as the R and RSR, given the restrictions applied to those other two. There’s also the small matter of there being no ABS or traction control. This current iteration of the Cup, based on the 991.2-generation 911, is the latest in a long line of one-make 911s dating back to the beginning of the 1990s, with over 3500 examples now sold. A highly profitable business.

The national Carrera Cups and the Supercup are as much about identifying, developing and rewarding driver talent as anything. You can tell this car is going to test its driver and need cajoling from the moment it bobs its nose down the pitlane in that idiosyncratic 911 way, softer sprung at the front relative to the rear thanks to the rear engine. Despite being enormously stiff compared to a road-going GT3 RS, in relation to the other two cars here it feels very softly sprung, and managing the weight transfer is crucial if you’re to get the best out of it. In a highly competitive series, whether national or international, the difference between winning and being an also-ran is tiny, and the best Cup drivers develop a real specialism in the cars. It’s something that stands them in good stead if they’re youngsters climbing the Porsche motorsport ladder.

There’s a kink not long after you join the banking on the start-finish straight, with a bump, where the Cup is the only car here on every lap that gives me a twitchy-backside moment. Each time I ever so slightly feather the throttle, bracing myself for the rear of the car to suddenly step out as it squirms around. It’s not so much getting the lock on in that precise moment that’s a concern; more how imperative it will be to get it off again to prevent the Cup suddenly turning full steam right and into the nearby unyielding concrete wall.

As my confidence rises and I get on the throttle earlier and more keenly in slower corners, so I discover that the Cup will oversteer under power relatively easily, too – although this surely costs lap time. The Cup also gives me my one minor ‘moment’ of the day: I lock the fronts under braking for the tightest left-hander, and rather than risk an incident I deliberately let the car run wide.

Out of the three cars here it’s the Cup that undoubtedly provides me with by far the biggest challenge. It’s a good challenge, mind, and as with all of these 911s, given the chance to drive one again, perhaps with the added challenge of a grid full of near-identical cars to tussle with, I’d be there like a shot.