POLL. What is the ultimate poster car?

Is one of our ten supercars the ultimate poster car for your bedroom wall?

When we ask people how they developed a passion for a particular car, the answer usually involves a friend, a relative and occasionally a neighbour. However, a major element that cements that passion is the bedroom wall poster. Most people still refer to their favourite car as the one that took pride of place on their bedroom wall, dreaming of the day that they would get the chance to drive one off the showroom floor. Some of us have realised those dreams, others are in the process of doing so. The point is, poster cars were the stuff of dreams, at least up till the turn of the millennium.

Here are some of the most epic poster cars:

The F40 has gained a reputation for being Ferrari’s ‘driver’s car’. Stripped to the bone to save weight, the F40 got its grunt from a twin-turbocharged 2.8-litre V8. The car was not easy to drive, and has become notorious for punishing less focused drivers.

The Enzo was Ferrari’s technological marvel. Carrying a number of features that would later find their way into the 599, the Enzo was the halo car to have. Although the car is more than ten years old, its exclusivity has rooted it in public memory as one of the best cars to leave the gates of Maranello.

The Countach was a styling masterpiece from Lamborghini. Function followed form to such an extent that practicality was ignored, leading to the famous leaning-on-the-door-sill reversing position. Made popular once again by the Scorsese hit ‘Wolf of Wall Street’, this car will forever be remembered due to its radical styling.

The CCX placed the small Swedish carmaker firmly on the map of high performance supercars. At one time the CCX was the fastest car in the world, and although that title has long since been lost, the CCX retains a reputation for being one of the few supercars to unseat dominant manufacturers like Ferrari from the race.

The F1 was McLaren’s first road car, and until the 12C, was thought to be the only street legal car to leave the Woking factory. Powered by a BMW 6.1-litre V12, this car was capable of achieving blistering speed in no time. The car is highly collectable, with famous owners including Mr. Bean actor Rowan Atkinson, which explains why it ended up on quite a few bedroom walls during its time.

The SLR was the result of a collaboration between McLaren and Mercedes Benz. The car met and exceeded all expectations when it was released, holding the mantle of ‘hypercar’ for a considerable period of time. It became one of the best ‘collaboration’ supercars out there, and still continues to turn heads wherever it is seen.

There is a new generation of cars out now, that redefine the dictionary definition of hypercar. With the most potential for becoming the new poster cars, I thought it would be odd not to include them.

A hybrid from Ferrari? Impossible, said the naysayers. Yet the LaFerrari is a hybrid, replacing the Enzo as Ferrari’s current halo car. Extremely exclusive with aerodynamically advanced styling and off the chart figures, the LaFerrai is Maranello’s masterpiece. For now, that is…

The P1 is also a bybrid, like its Italian competition. The similarities end there however. The car from Woking is easy to drive, on road and track, despite running 903 hp. Seamless power delivery from the electric and petrol motors make for a thrilling experience when the throttle is engaged in anger. The P1 is new to the game, yet has already raised standards of hypercar construction and design since its release.

It certainly is the age of hybrids, because Porsche has jumped on the bandwagon too. The result : absolutely stunning. Carrying Porsche racing heritage and engineering , the 918 Spyder’s 887 hp holds up nicely with the other two, and the choice of dropping the top adds appeal to those who like to have the wind in their hair.

As always, the Swedish carmaker takes things to another level. With one horsepower for each kilogram of mass, this car has 1360 hp. I’m going to try and figure that one out, I’m sure you will too…

Which one of these was your poster car? Vote below: 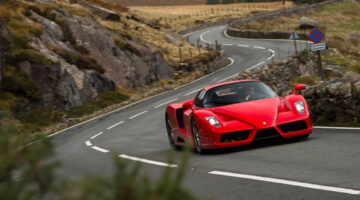