Amid much fanfare, Land Rover has pulled the covers off its all-new, fifth generation Discovery. We dive beneath the surface for a closer look at the UK launch

Despite the car’s presence at the Paris Motor Show, Land Rover staged a simultaneous, celebrity-studded launch near its UK headquarters, complete with helicopters and record-breaking Lego sculptures. The cost would have been considerable, which just shows how big a deal it is for the British carmaker.

In additional effort to spread the word, a range of First Edition cars will be produced for early adopters. Just 2400 will be made, all of which will come in three exclusive paint colours – Namib Orange, Silicon Silver or Farallon Black – and three interior colour options.

no images were found

The new Discovery is a step forward from its predecessors, eschewing the previous upright, chunky style in favour of a more luxurious, contemporary and aerodynamic shape that mirrors the Discovery Sport (our full drive of which you can find HERE). But Land Rover says the new car is even more capable than Discoverys of old, with cutting edge technology, practicality and off-road capability.

Despite the sleeker looks, some blasts from the past remain, including a stepped roof and large C pillar, and the asymmetric tailgate. At the front, LED front and rear lights bring the car bang up to date. 18 paint colours are on offer, and 14 alloy wheel designs. The new Discovery also sheds a serious 480kg compared to the fourth-generation model, thanks to extensive use of aluminium, although it’s actually 14cm longer than the car it replaces.

It seats seven adults on three rows of seats, and the layout can be configured remotely by smartphone app, should you be so inclined. Space is a key selling point – with the second and third rows of seats folded flat, the Discovery has 2500 litres of luggage space. The interior is more upmarket than before, and has plenty of comfort features including six 12V sockets, nine USB charging points and Wi-Fi for up to eight devices. 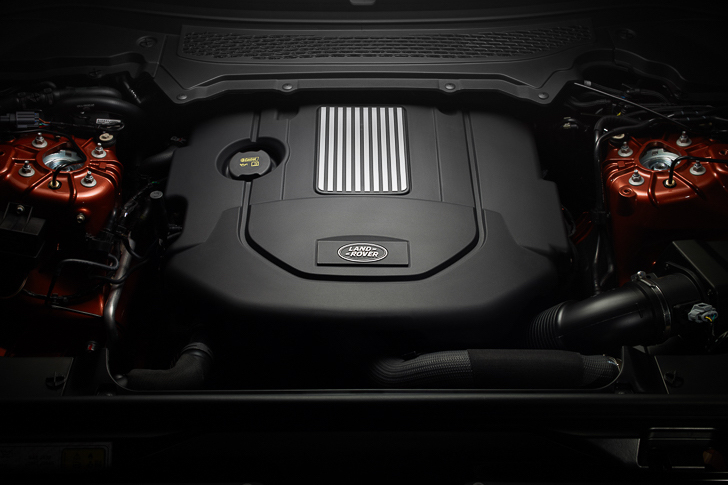 What about engine options?

Power comes from a range of four engines at launch, including three diesel units for global markets. But the Middle East will get the petrol offering, which is a 3-litre V6 with 335bhp and 332lb ft, attached to an eight-speed automatic transmission.

Off-road, the new Discovery will wade through water up to 900mm deep, and it has a towing capability of up to 3500kg. In many parts of the world, the Discovery is marketed as a lifestyle family vehicle, but having proper skills away from the tarmac is hugely important to Land Rover, so it’s loaded the new car with features to help it excel on the rough stuff. It boasts 34-degree approach and 30 degree departure angles, and a break over angle of 27.5 degrees. Ground clearance is up to 283mm, and the wheels will articulate by up to 500mm. 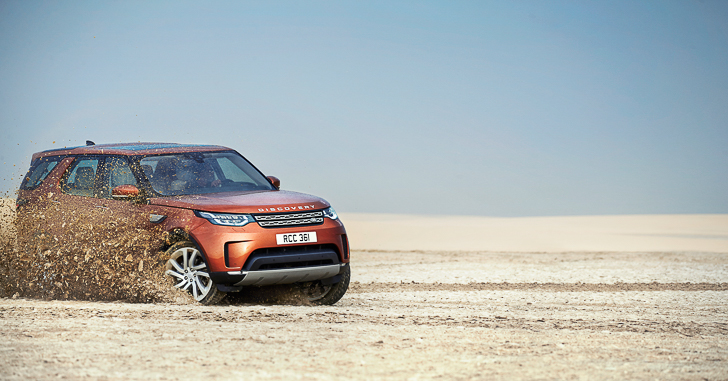 Give us a few more details on this ‘cutting edge technology’…

To start with, the Discovery comes with Terrain Response 2, which automatically monitors the driving conditions and sets the car up accordingly, with settings ranging from grass, gravel and snow to mud, sand and rocks. All Terrain Progress Control is almost an off-road cruise control, which lets the driver set a crawl speed and focus only on steering. The car is available with a two-speed transfer box for low range manoeuvring.

Land Rover has packed the Discovery with technology that helps the driver, but there are plenty of other gadgets and gizmos included too. As well as the infotainment system’s dual-view 10-inch touchscreen and 17-speaker Meridian surround sound system, the car has a high-speed Ethernet network built into it, along with a 60gb solid state drive and a quad-core processor.

A range of smartphone apps let you tinker with the Discovery, allowing customers to lock and unlock their car, check its location and operate the climate control remotely. You can also track the car if it’s stolen, and use a route planner function to plan a journey on your phone and send it directly to the car’s sat-nav system. If you have an accident, InControl Protect will alert the emergency services. In addition, a wearable Activity Key wristband lets you get active – for example, go for a run – without having to carry a key fob. Just use the wristband to lock and unlock the car. Those with Apple Watches or Android Wear devices can also interact with their Discovery remotely – check whether you’ve locked it, see how much fuel is left or even just remember where the heck you parked it.

Any rivals to be concerned with?

In the Middle East, the Discovery will be taking on other premium SUVs including the Nissan Patrol, Infiniti QX80 and Lexus LX570, as well as the Audi Q7 and Volvo XC90. The Discovery will be substantially cheaper than the Range Rover, but it’s definitely a more premium offering than its predecessor, which will go down well in this part of the world. Its newness and the draw of the Land Rover badge will give it an advantage as well. The claimed stats suggest it’ll do well off-road in comparison to the above cars, and Land Rover has excellent past form in this, but we’ll have to organise a group test to see if that’s really the case.

So, what’s the final verdict then?

The new Discovery is a major new product for Land Rover – more than 1.2 million Discoverys have been sold around the globe – but especially so here in the Middle East where the brand has always been strong. The new design is a departure from what has gone before, with the chunky styling ditched in favour of a more futuristic, streamlined look seen on the Discovery Sport. Some will miss that more rugged look, but underneath the technical ability, always a Land Rover strong point, should be as good as ever and we’re looking forward to getting out in the dunes with it. On-road, the clever seating arrangement looks to give lots of room for seven adults, and there are plenty of available features to keep them occupied. Add in the considerable towing capability and, on paper at least, Land Rover looks to be on to a winner.