Our Long Drive Home. The Finish Line. UK to Australia

Mike and Jess and their 2004 Renault Clio have crossed through 15 countries, spent five weeks on the road, covered 16,000km and taken on the elements. And finally, they make the finish line of the 2013 Mongol Rally.

We made it! We have conquered the 2013 Mongol Rally.

Five weeks and one day after leaving the UK, we are here in Ulaanbaatar, Mongolia having passed through 15 countries, and travelled over 16,000 kilometres. Our long drive home has been both exhilarating and exhausting but we are both very proud of what we have achieved so far.

We woke up in Altay feeling pretty happy with ourselves but knew there was still a long way to go. We therefore hit the road early, and our hopes of a single piece of tarmac all the way to Ulaanbaatar were slashed in dramatic Mongolian fashion. Unfazed, and not surprised by the single dirt track stretching before us, we continued on. After a few hours the road split. There were no signs, but one road went South East-East and the other went South East. A split-second decision took us over one of the toughest mountain passes yet.

We found that dirt trails we were on would just end and rocks would be in their place. So with Jess at the wheel, I would run ahead to find out which route to take. We were basically rock-hopping over a Mongolian mountain in a Renault Clio. After over an hour and a half of slowly edging ourselves forward trying to avoid destroying the front end, we finally made it back to the main road. 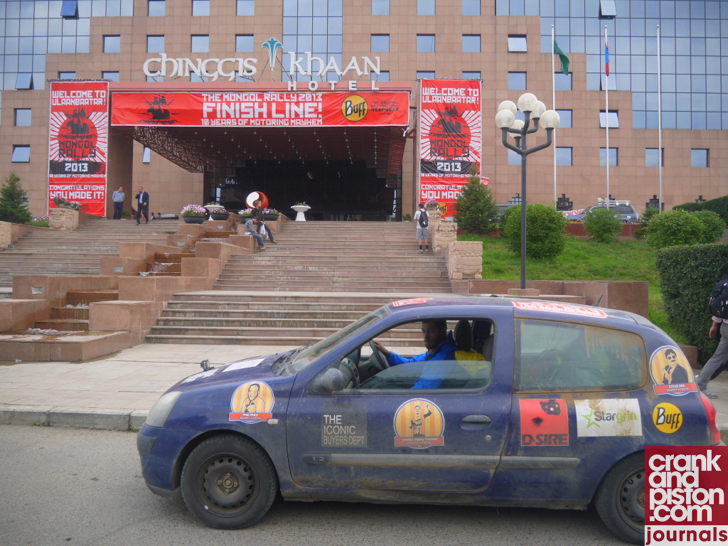 Unfortunately our gearbox took a small hit, so at the next town – Bayankhongor – we stopped at a garage and got the box bashed back into shape. I helped the mechanic out whilst Jess played with the guy’s cute kids, and made sure we were back on the road before she adopted one of them. After several more hours on the road, we found a place to camp. Another cold and wet night by the side of the road was had but we woke up ready to get to Ulaanbaatar. We were sick of being cold and wet now, and with only 450km to go, and 400km of that supposedly all tarmac, we were determined to get to the capital.

The following day was actually pretty uneventful. The roads were all tarmac, except for a small river crossing. But having spent more than a month on the road, we had become such pros that we were able to help out a local family who had fallen victim to the Mongolian mud. By 5pm we had Ulaanbaatar on the horizon but traffic was getting busier and busier. Why is it that we always enter these cities around rush hour?

We inched ourselves past the busy Mongolian commuters, asking for directions to the Chinggis Khaan Hotel along the way. Ulaanbaatar like most Mongolian cities are deceptively big. The city centres themselves are pretty compact and easy to navigate but the sprawl entering Ulaanbaatar in particular goes on for a few kilometres. However, with the realisation of what we had accomplished starting to sink in, we started to feel excited. When we saw the Mongol Rally ‘Congratulations, You Made It’ signs hanging over the entrance to the hotel, we really couldn’t believe it!

Getting a car with a 1.1-litre engine from London to Ulaanbaatar in five weeks is no easy feat, and it felt great being able to say we were one of the lucky ones whose car didn’t give up on us.

For now we will rest up, hose ourselves down and get ourselves sorted for the next stage of our epic adventure to Sydney.

Previous ArticleNew Ferrari 458 Speciale. We Want!
Next Article ProForm 2012 Volkswagen Golf R. Out with the old