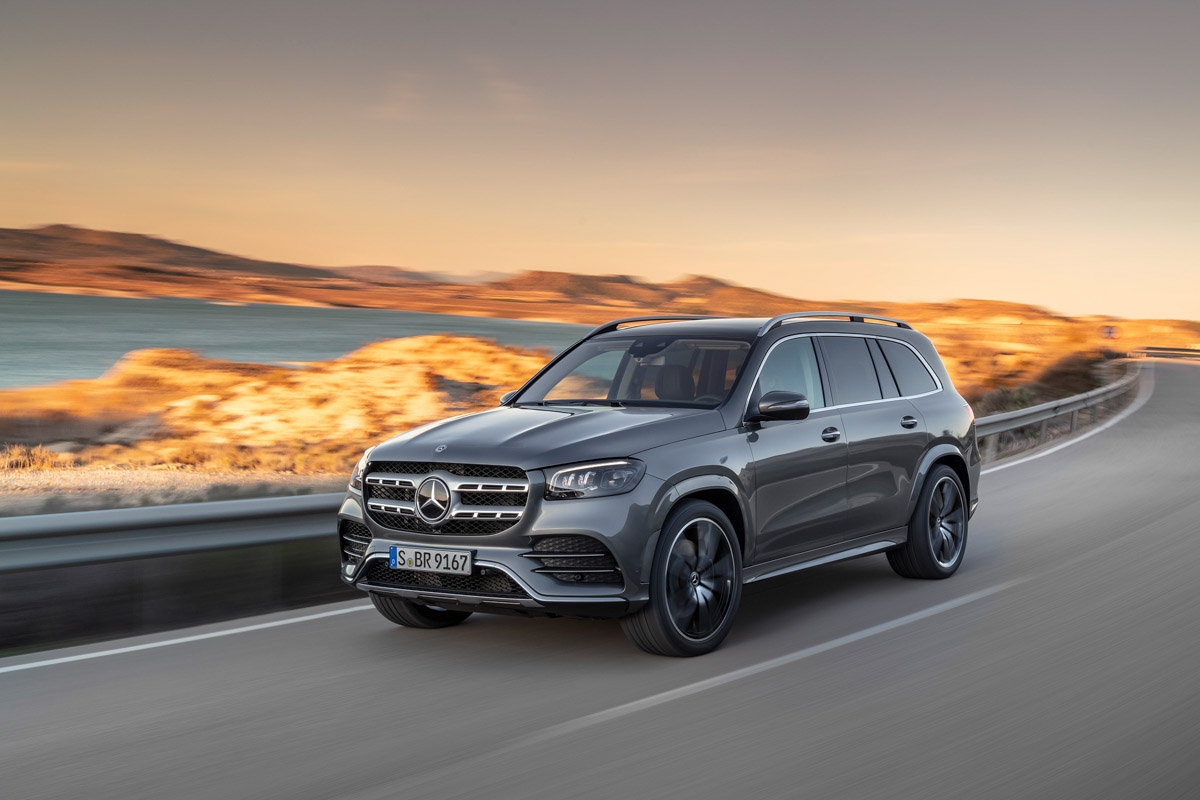 Mercedes-Benz has revealed the next-gen GLS SUV, topping its contemporary SUV line-up in terms of size and rivalling other full-sized seven-seat SUVs such as the BMW X7 and Volvo XC90. Not one for subtlety, it’s no surprise that it has been revealed in the US, which is where a majority of GLS models will be sold.

As before, the GLS borrows its underpinnings from the smaller GLE, and as an extension Merc’s MRA platform, but stretches the huge bodywork a further 283mm to create space for a standard seven-seat interior. The wheelbase has also grown a further 140mm, unlocking more rear legroom to create what Mercedes is effectively calling an S-class SUV. In total, the GLS sits at 5207mm in length – over 200mm longer than a Range Rover.

Powering the GLS are four power plants, not including the inevitable AMG variant, made up from two petrol and two diesel options. The petrols, which are unlikely to appeal to many European buyers, are made up of a carryover 3-litre turbocharged in-line six, boosted by an integrated starter-generator and 48V mild-hybrid system. The system produces a total of 371bhp, with an additional 21bhp available from the EQ motor on overboost. A new V8 mild-hybrid is also available, pairing the same EQ boost motor and 48V circuitry with a 4-litre hot-V V8, which produces 482bhp, again with an extra 21bhp available on overboost. With such a high power figure on a non-AMG version, we’d suspect a ‘53’ AMG model, as seen in the smaller GLE, will not be available on the GLS. The two diesels on offer are familiar 3-litre in-line sixes in 282bhp and 335bhp forms.

As Mercedes’ largest SUV, it’s also chock full of chassis tech, with standard air suspension all round, which is able to be optioned with a new adaptive suspension system Mercedes calls E-Active body control, which calls upon the 48V circuitry to actively monitor and vary the dampers and air springs on each individual wheel to control the GLS’s considerable mass in  both on- and off-road applications. This suspension system is even able to harvest energy directly from the suspension, feeding the power back through the electronic systems. E-Active body control is also available in the smaller GLE, but is not offered in the UK thanks to its hefty cost – it remains to be seen if it’ll be offered on the GLS here, even as an option, considering the model’s higher price point.

Deviating from its S-class SUV mantra, the car’s interior is identical to that of the smaller GLE, combining Merc’s now trademark twin-screen layout featuring the latest MBUX infotainment system. The interior’s added sumptuousness is instead found in the middle, and even third row, with optional second-row captain’s chairs, electric automation of all five rear seats, five-zone climate control, heated seats throughout and various forms of rear-seat entertainment packages.

The exterior design is as one might expect of a modern Mercedes SUV, combining smooth exterior surfacing with the usual off-road addenda and extensive brightwork. AMG Line models eschew most of the chrome and offer a ‘sportier’ look which, combined with wheel sizes of up to 23 inches, says a lot about the sheer size of the latest GLS.

UK prices and specifications have yet to be confirmed, although it remains unlikely that the petrol V8 GLS580 will be offered locally. Expect starting prices in line with those of rivals such as the BMW X7 of around $104k, rising to well over six figures for the eventual range-topping AMG version.