Electric car manufacturer Tesla has revealed the first images of its new Roadster model, alongside its long-proposed semi-truck commercial vehicle.

A new Roadster has been expected for quite some time, with Tesla CEO and founder Elon Musk having suggested that once the brand had begun to produce more conventional cars in volume, the firm would replace the sports model that first built Tesla’s reputation.

But while the original Roadster was heavily based on the Lotus Elise platform, the new model looks rather more ambitious – and as we’ve come to expect from Tesla, boasts some spectacular on-paper performance figures.

No power figure is quoted, and you can ignore Tesla’s torque figure of over 7300lb ft, as it’s a “wheel torque”, multiplied by gearing and therefore not directly comparable to the crank torque (or motor torque) quoted by other manufacturers.

More significant is that the Tesla delivers its power and torque figures through all four wheels, and would do so effectively from rest. Tesla hasn’t mentioned a weight figure either, but it’s safe to assume the Roadster is lighter than models S, X and 3, given a claimed 0-100kph figure of 1.9sec, and 0-160kph in 4.2sec. The quarter-mile would be shrugged off in 8.8sec.

Unlike many electric cars, acceleration doesn’t come at the expense of a range-limiting top speed either, with Tesla suggesting ‘over 402kph’ at the top end. It’s fair to assume that top speed would somewhat limit range, though driven at a more sedate pace, Tesla also claims a 1000km range on its 200kWh battery pack.

Styling is more distinctive than the firm’s other models, though still slightly generic, in the manner of a car designed for an insurance advert or a videogame with no official manufacturer licences. If the coupe styling is confusing you given Tesla’s choice of the Roadster moniker, then things become a little clearer when the central targa-style panel is removed.

The interior is said to seat four, and is typically Tesla-minimalist. Though the dashboard layout is more conventional than other Teslas, an aircraft yoke-like wheel reintroduces an element of sci-fi.

Tesla is already taking deposits of $50,000 on the $200,000 Roadster – or full-price deposits of $250,000 on what it’s calling a Founder Series model. Production is expected to begin in 2020 – though this being Tesla, beset by delays with all its vehicles, you take that figure with a pinch of salt.

Given the firm posted a record $619 million loss in its previous quarterly earnings report coupled with discrimination lawsuits and Model 3 production issues, it’s difficult not to see the timing of its new Roadster as being quite convenient – the inevitable tide of Tesla fans willing to fork out huge sums for orders that don’t need to be fulfilled for another two or three years will no doubt bolster Tesla’s cash flow for the next few quarters.

If all goes to plan however (and Tesla rides out its current storms in the meantime), the Roadster’s quoted performance figures could make it the quickest production car ever built.

Tesla says the truck will deliver fuel savings of $200,000 per year for operators (enough for a shiny new Roadster, and giving the truck a two-year payback period), and actually quotes a 0-100kph time of 20sec for the truck – pulling a 36-ton load. Unloaded, it’ll reach the same figure in a fairly astounding five seconds.

300 and 500-mile range options would be offered, and power comes from four independent motors at its rear axles. Those axles are shrouded for aerodynamics – and the truck’s entire shape is unlike anything we’ve seen pounding the world’s highways, and has a quoted drag coefficient of 0.36 – better than some SUVs, at least until frontal area is considered.

A central driving position is said to improve visibility for the driver, but with next-generation Autopilot autonomous functions, an operator might not need to do a great deal of driving themselves anyway. 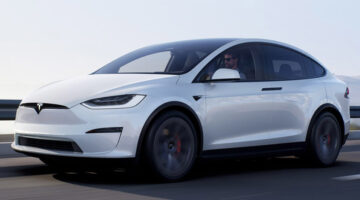