crankandpiston jumps behind the wheel of the new Mercedes-Benz A250 Sport in Dubai, UAE. And yes, it survives the Elk test. 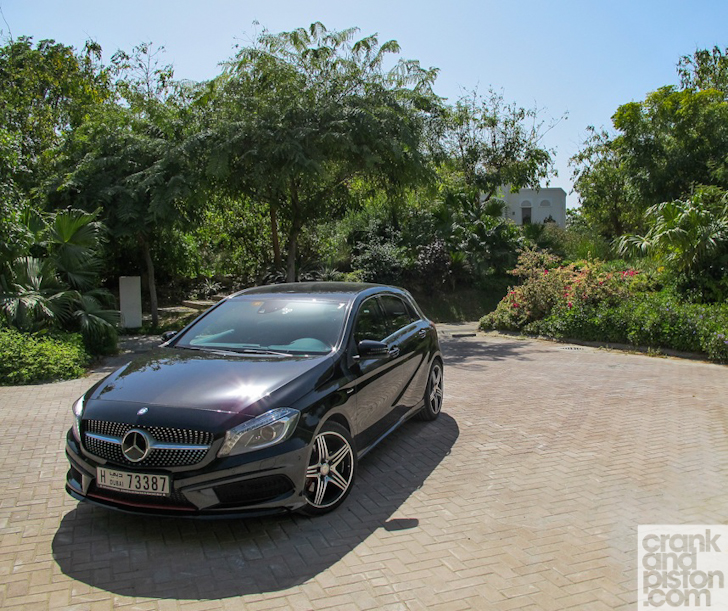 It’ll be some time before the Mercedes-Benz A-Class lives down its infamous 1997 elk test fail. And if that wasn’t enough, there’s already sizeable pressure from within Mercedes for the new A-Class to succeed: by 2020, the marque hopes to have become the world’s best-selling premium manufacturer, eyeballing its compact sector as a key player in this strategy. Up against the BMW 1-Series, Audi A3s and Lexus CTs of this world, that’s a pretty tall order. 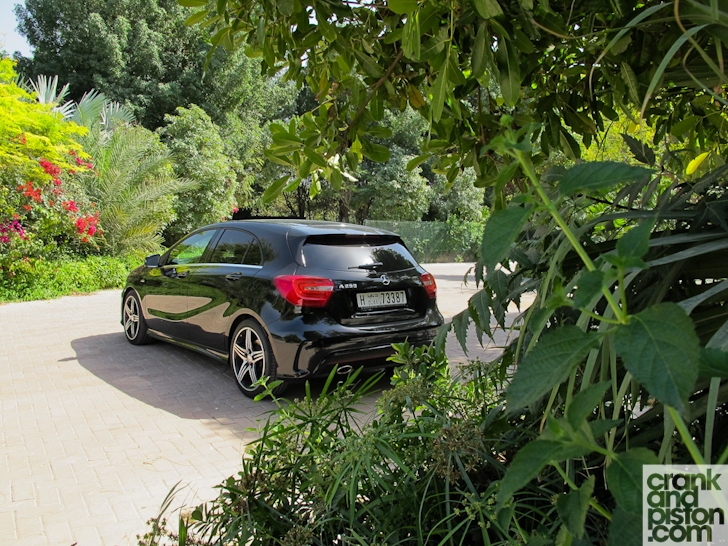 A dynamic new look then for the third generation W176 is a good place to start. Gone are the 45 degree angled windscreen/bonnet and high B-pillars of the 2004 second gen model in favour of a noticeably lower roofline, a longer wheelbase and significantly sportier styling (as part of the model’s inherent ‘youth appeal’). In its eight-year hiatus, the A-Class has done some serious growing up.

Along the sides for example we have new aggressively styled bodylines that sweep across the rear doors, and a much lower ride height (24mm) than the previous generation. The Sport element of our A250 Sport test model comes courtesy of Mercedes tuning arm AMG, and though no changes have been made to the drivetrain or engine (all that’s to come with the new A 45 AMG), the A250 Sport receives 18-inch five-spoke AMG light-alloy wheels and red tinted brake callipers. It’s a similar story at the back too, where a cheeky tail lip roof spoiler, chrome exhaust tips, beefy rear bumper and angrily carved grooves in the wheel arches add a whole new dynamism to the A-Class. 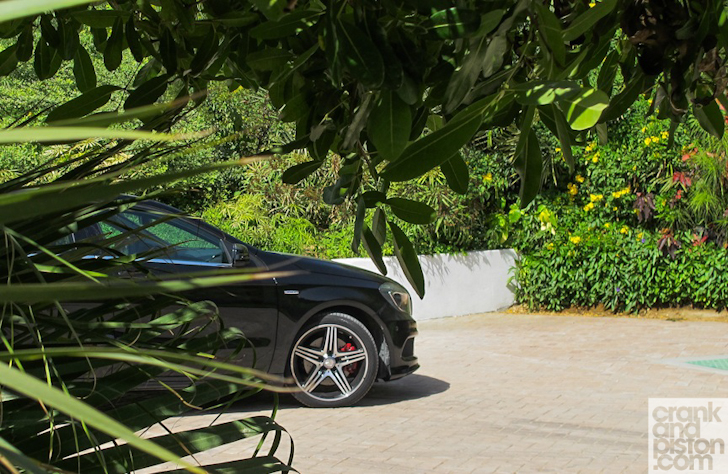 The front though proves a little more difficult to love. The red front splitter and suitably aggressive air intakes in the bumper make a great impact, but there’s a grace – I’d even say elegance – to the headlights and bonnet lines that don’t quite match the sharp-edged look of the rear and sides (plus a gaping front grille): Mercedes has suddenly gone a bit sensible, and we’re now more luxury saloon than hot hatch, which does hurt the A250’s presence a touch. 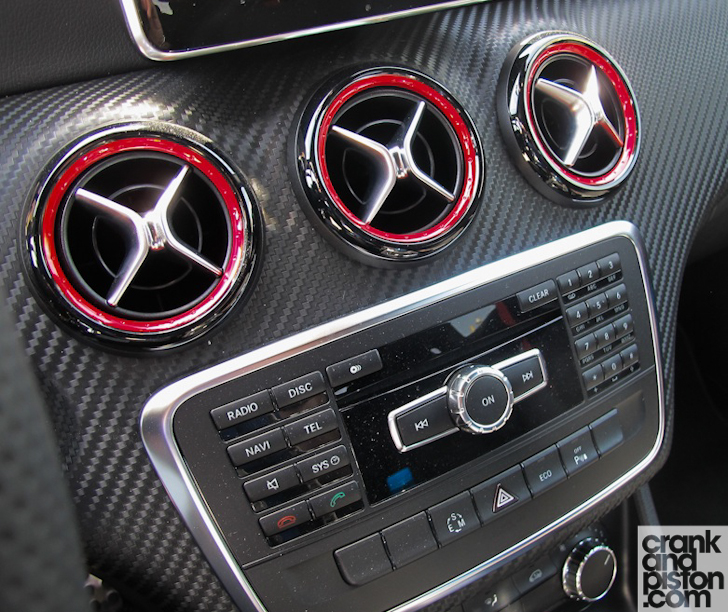 What does win the A-Class back some merit badges is the newly styled interior. Mercedes interiors – though beautifully made and gorgeous to look at – have a tendency to be a little soulless, and while purists may disagree with the ‘funky’ element involved in the A250, I for one am quite enamoured by it. Matching the brake callipers and front splitter, our all-black cabin boasts red seatbelts, air vent surrounds and even a red speedometer needle. I’m also quite keen on the faux carbon fibre Artico trim on the dash and the almost bucket racing seats in the front. There’s even room for practicality, since leg and headroom front and rear is ample, despite the vehicle’s height being slashed. The position of the piano black lacquered infotainment screen though – fastened as it is to the centre console rather than incorporated into it – does make the system look too much like an afterthought. It’s no more difficult to use, but it is one style choice that goes a bit too far. 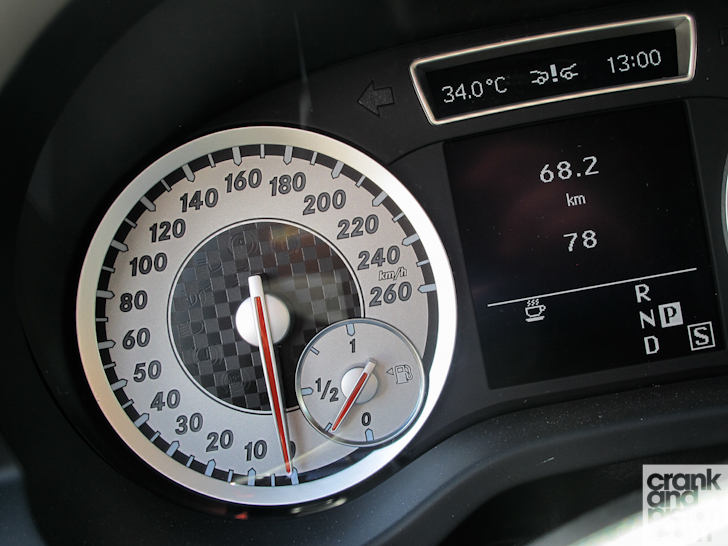 So far so sporty then, a point further emphasised by the hardware on offer. With only the highest spec model available in the GCC, the A250 Sport is powered by a new 2.0-litre turbocharged four-cylinder engine, which produces 208bhp and 258lb ft of torque, boasts a top speed of 240kph and means a 0-100kph time of 6.6 seconds: that brings us, not shabbily, into Audi TT territory. There’s also been significant changes made to the multi-link suspension and chassis to make both stiffer (though a three-way drive mode means the driver can alternate between Sport and Eco/Comfort modes on the road) in an effort to improve weight distribution, centre of gravity and balance. 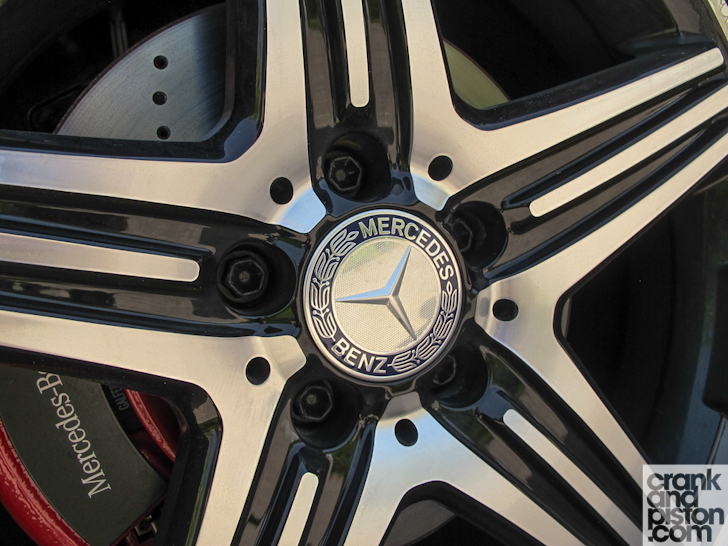 That they certainly have done. The A250’s steering for example is surprisingly light yet still very alert, offering plenty of feel for the front Continentals. There’s no real body roll to speak of either, and shifts through the seven-speed gearbox via the wheel-mounted paddles were also encouragingly sprightly. Braking at times did prove a little tricky, the pedal feeling somewhat numb unless stamped on with vigour, though this may change as the new discs are bedded in: indeed, our test model had yet to complete 100 kilometres before we slid behind the wheel. 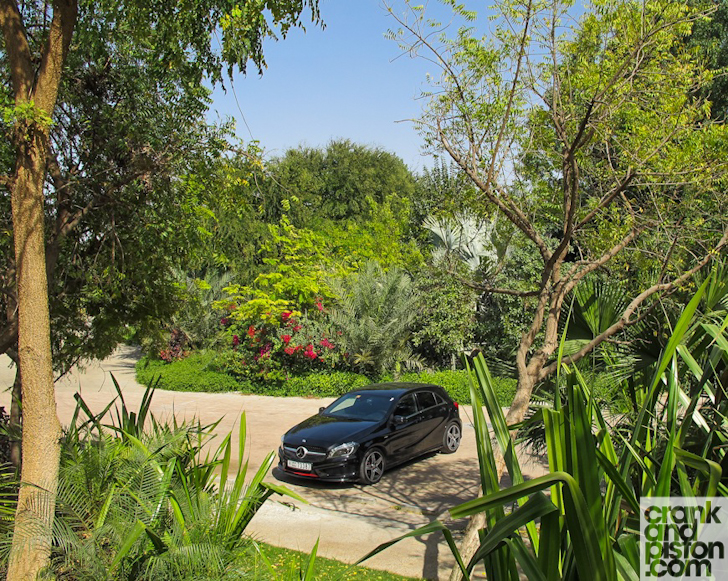 What did prove a little disappointing though was acceleration. There’s plenty of poke from the turbocharged four cylinder certainly, and the fact that optimum horsepower and torque comes in at 5500rpm and 4000rpm respectively means that A-Class doesn’t hang around when the loud pedal is punched. The front-wheel drive configuration though can lead to the front tyres scrabbling a little under heavy acceleration, and while grip by-and-large is pretty impressive (the rears remain loyally on their respective rails), throwing the A-Class into a tight left or right hander at pace will see the fronts wash wide. For all the dynamism showcased by the looks and ‘Sport’ badges on the wheel arches, floor mats and three-spoke steering wheel, the experience does feel a little muted when you’re really on it.

For 2020 then, the A-Class may need to pull its socks up if it’s to become the game changer of the compact automotive sector. Or perhaps, as most expect, that task will fall to the big bad A 45 AMG when it finally lands.

You can find more Mercedes stories HERE, and more of our Car Reviews HERE