Ahead of its Geneva Motor Show debut, Lotus has released images and technical info of its new Evora 410, a lighter, more powerful version of its flagship Coupe. The model’s unveil comes just a week after Lotus announced the hardcore Elise Cup 250, which is also set to make its debut in Geneva.

Lotus has taken the already stellar Evora 400 (which we took for a spin earlier this month) and basically stuck it on a diet. The front splitter, roof panel, tailgate and rear diffuser for instance have now been replaced with carbon-fibre alternatives, which – combined -also increase downforce in the already sprightly Evora by a further 15 percent. The 410 also receives some ultra light-weight, 10-spoke forged aluminium alloy wheels, resulting in a kerb weight of 1,325kg, 70kg less than the standard 400. Little has changed on the inside, although the new carbon-fibre sports seats have been mounted and the upholstery has been trimmed in Alcantara. There’s also an updated touchscreen infotainment system.

Under the bonnet lies the same 3.5-litre supercharged V6 found in the more performance-focused 3-Eleven, which produces 410hp – 10hp more than the Evora 400, as the name suggests – and 302lb ft of torque, sent to the rear wheels via a six-speed manual transmission. Consequently the new 410 hits 0-100kph in 4.2 seconds (or 4.1 secs with the optional six-speed automatic) en-route to a 300kph top speed. Though these figures are all but identical to the Evora 400, the 410 is capable of lapping Lotus’ official Hethel test circuit in 1m 28s, three seconds faster than its sister model. A large part of this could also be down to the tweaked dampers and suspension setup, which have reduced the ride height by 5mm, which Lotus claims allows ‘sharper, more agile and intuitive handling’ and ‘takes the Evora to a whole new level’. 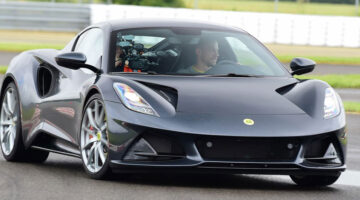 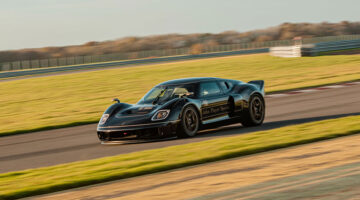