Removing the roof adds another dimension of enjoyment to the DBS without detracting dynamically. A truly fabulous machine 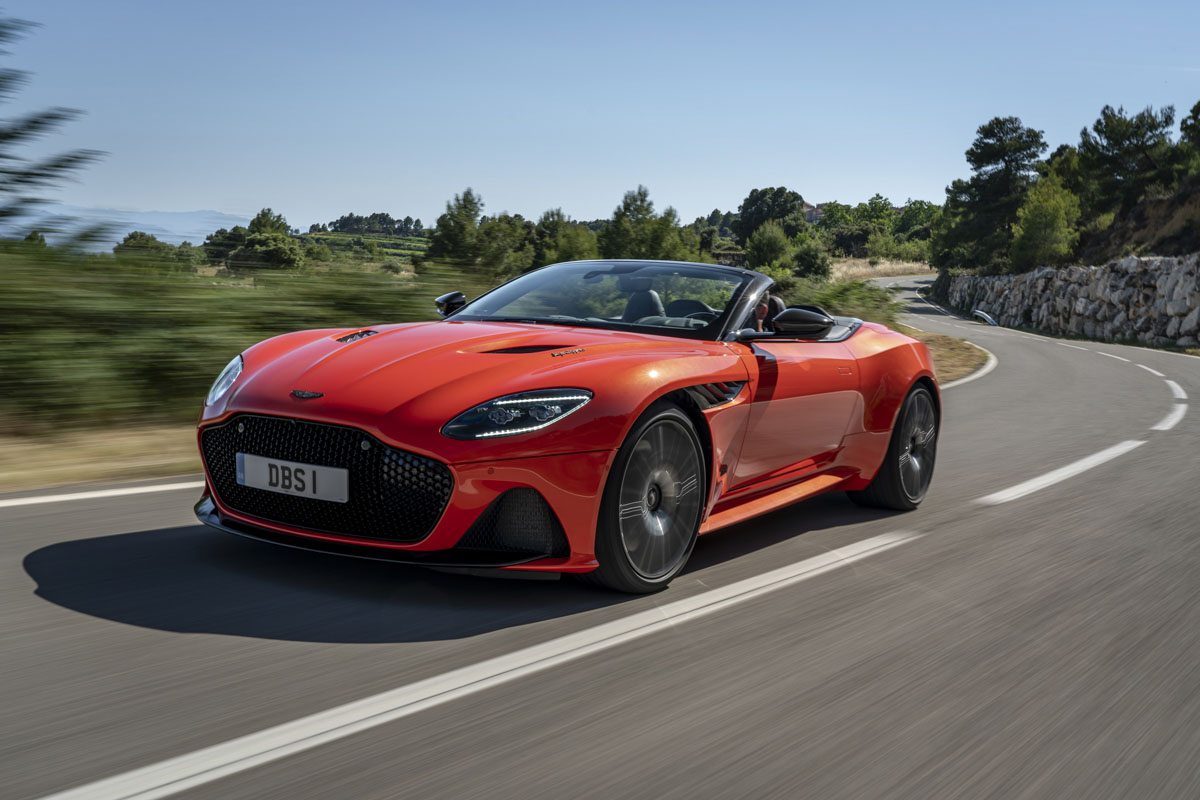 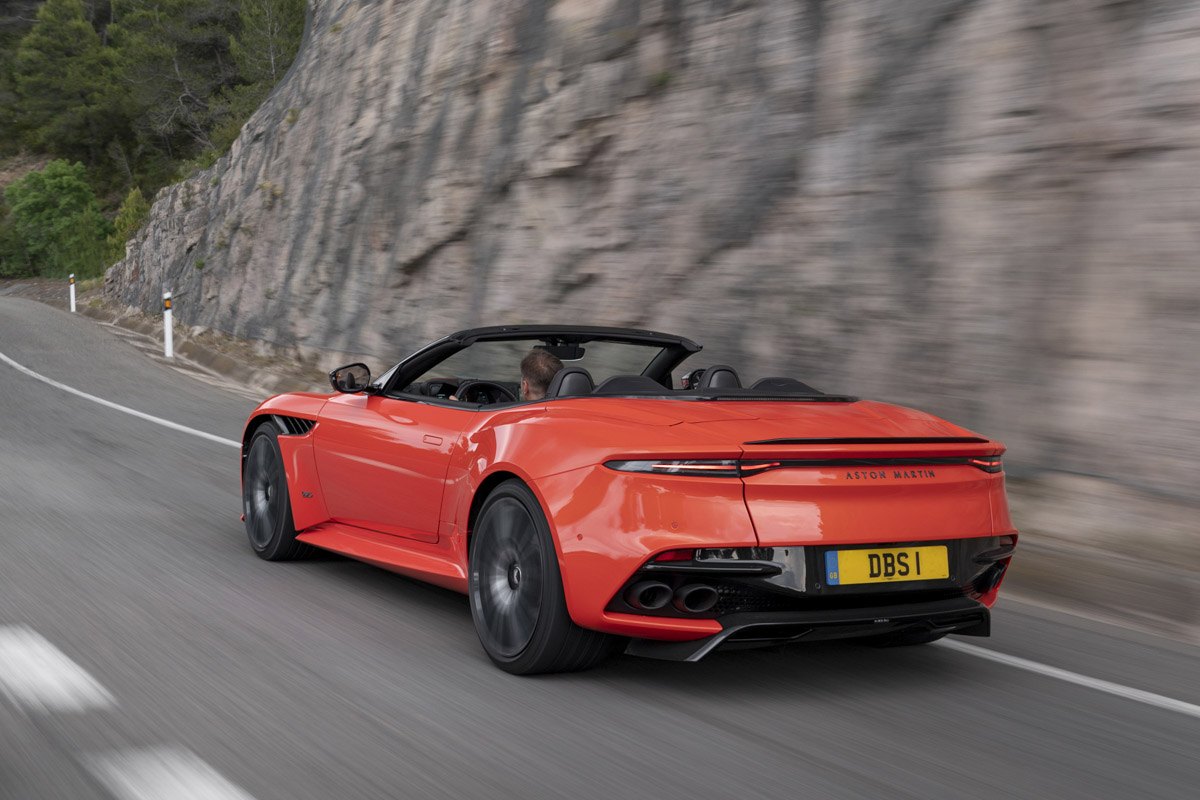 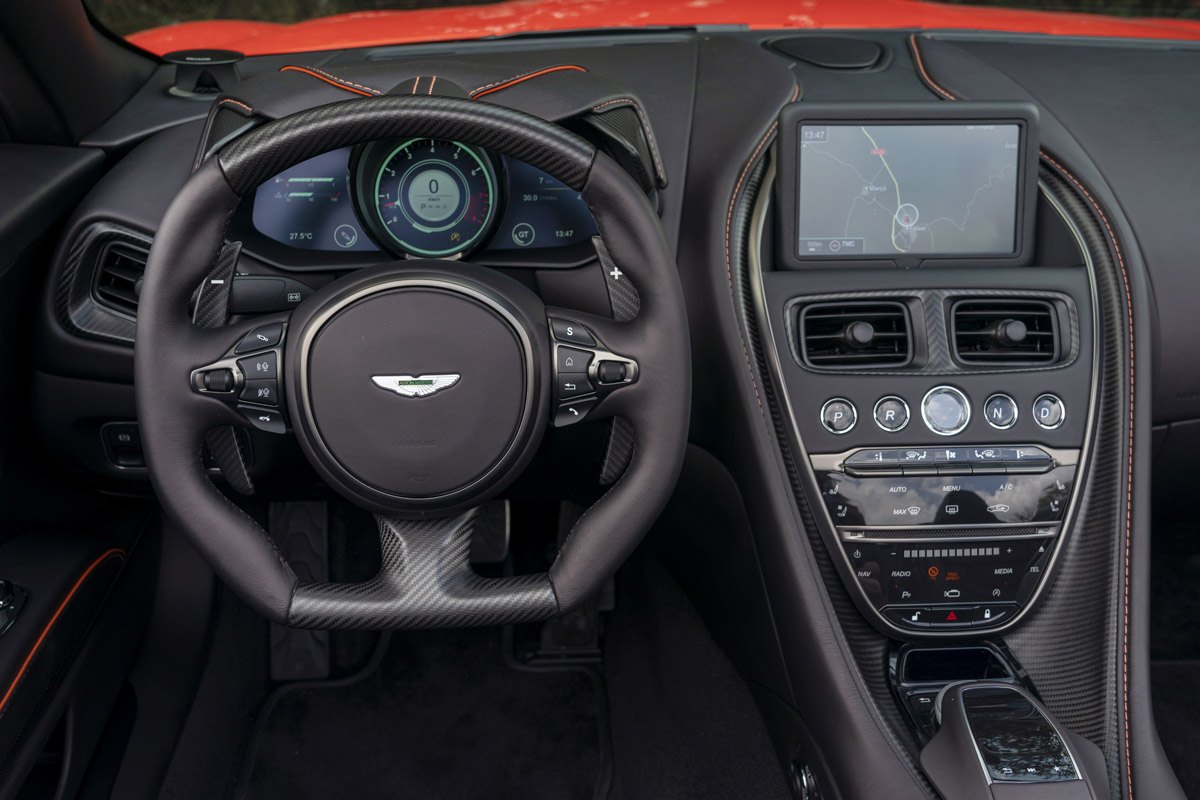 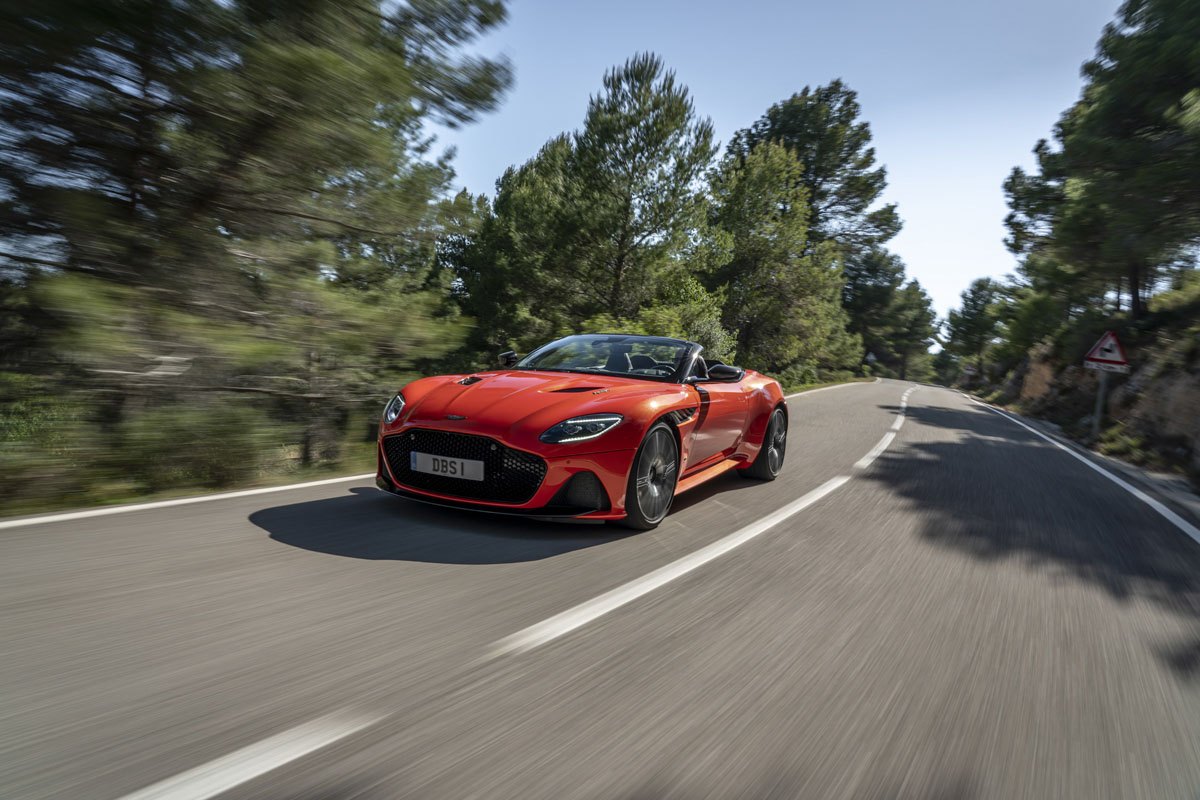 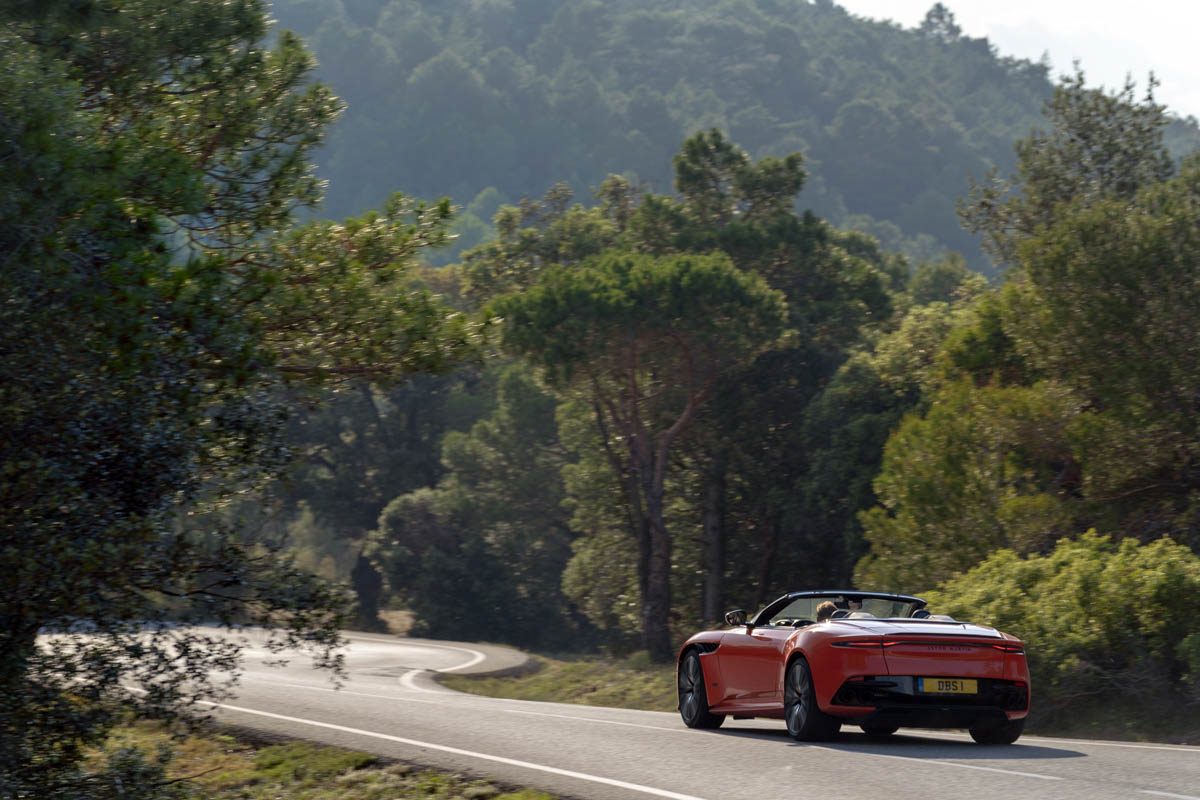 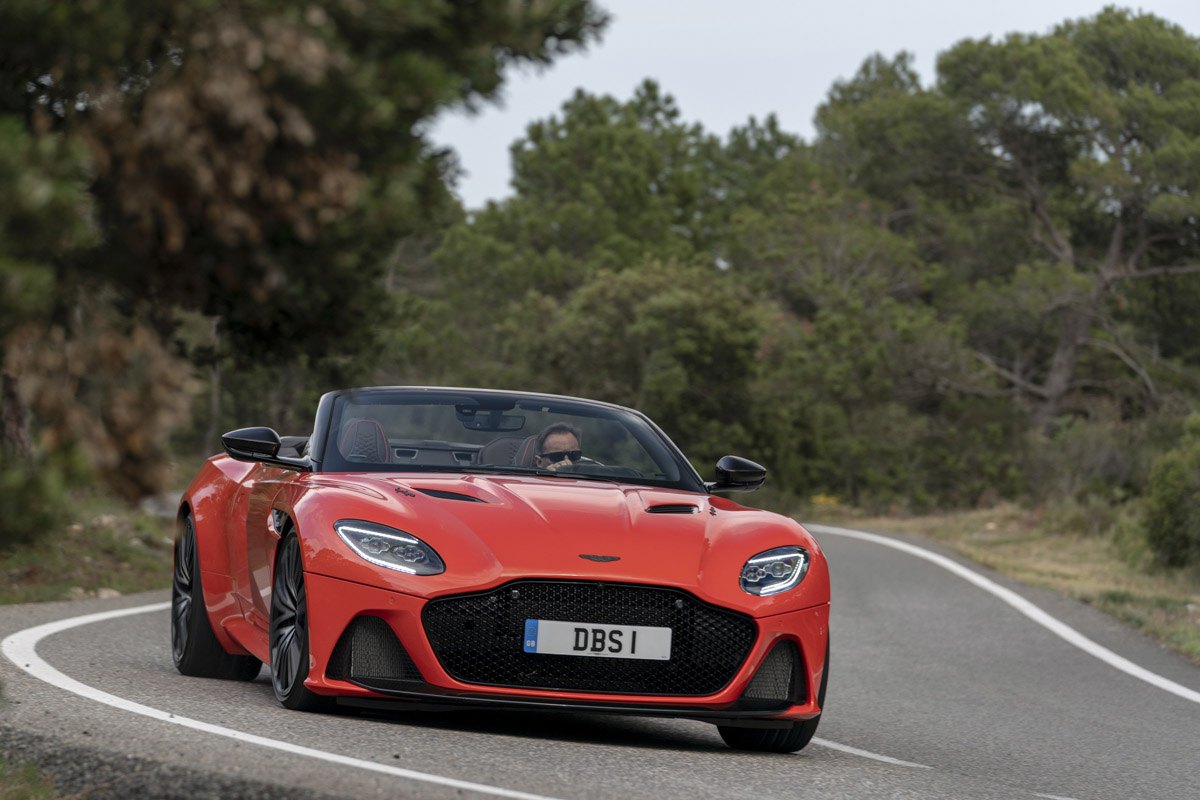 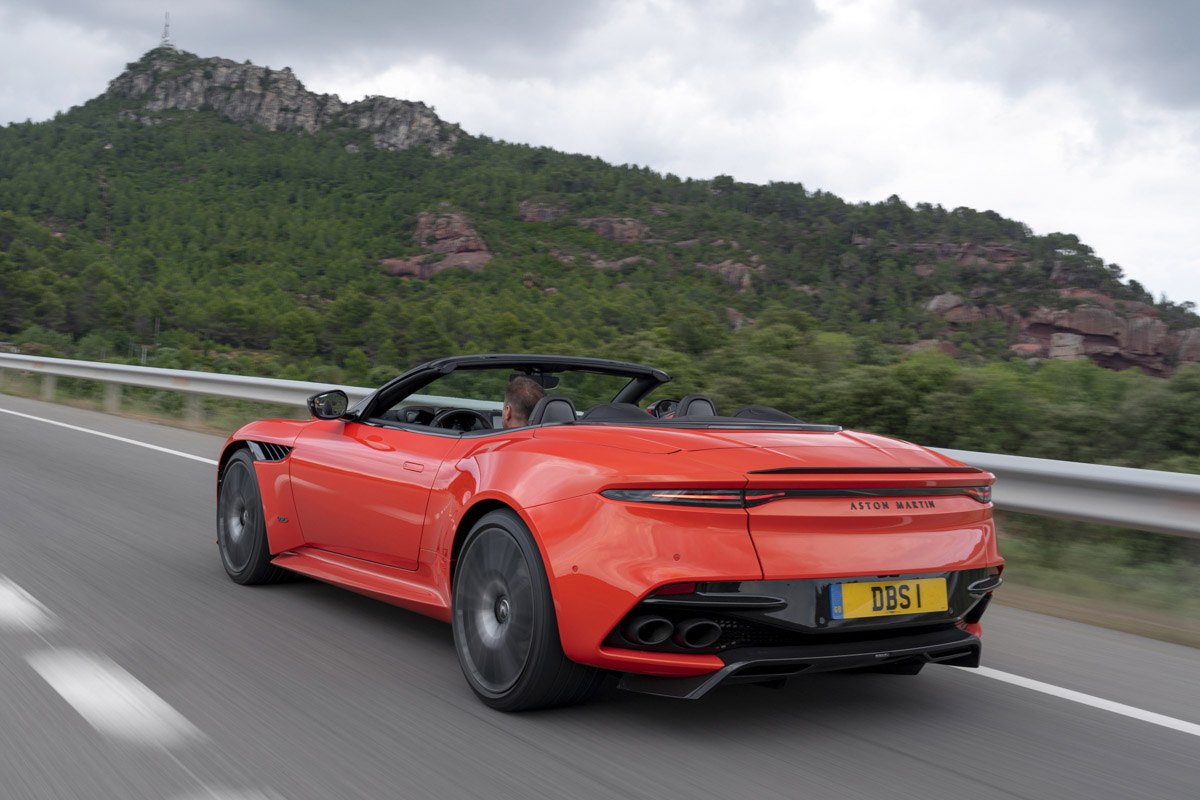 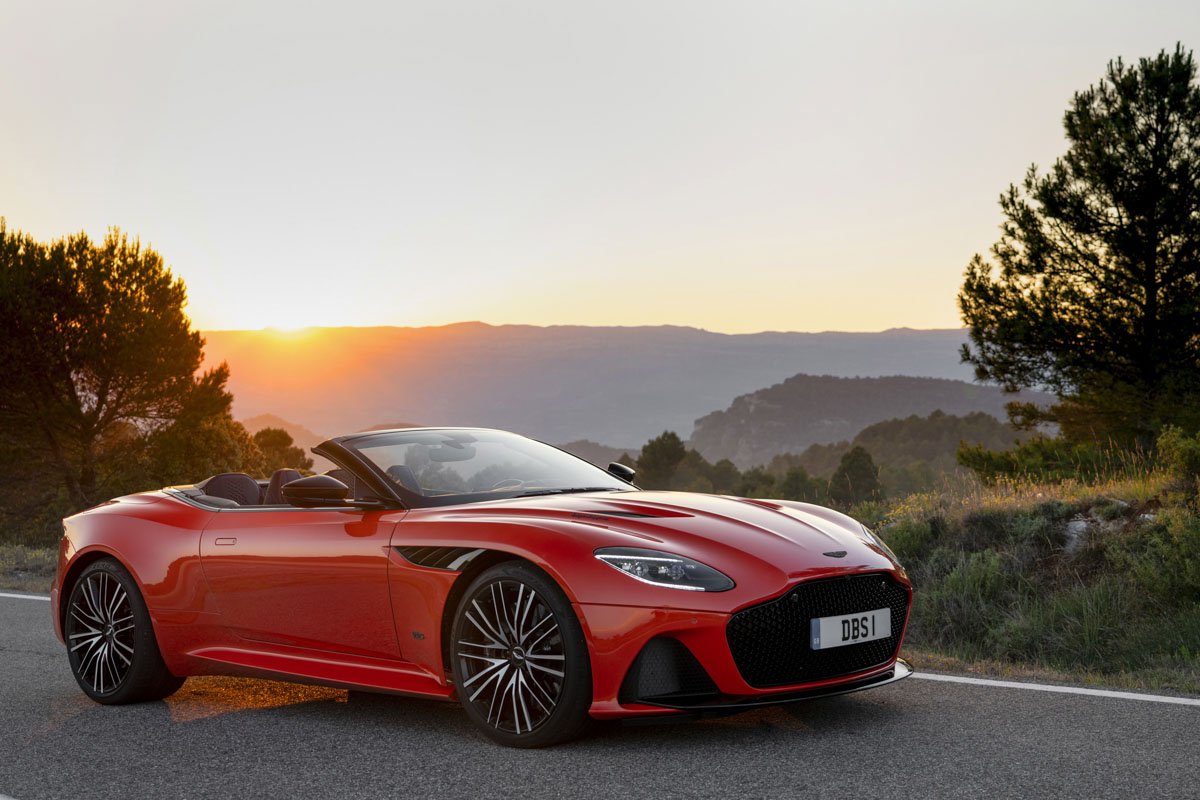 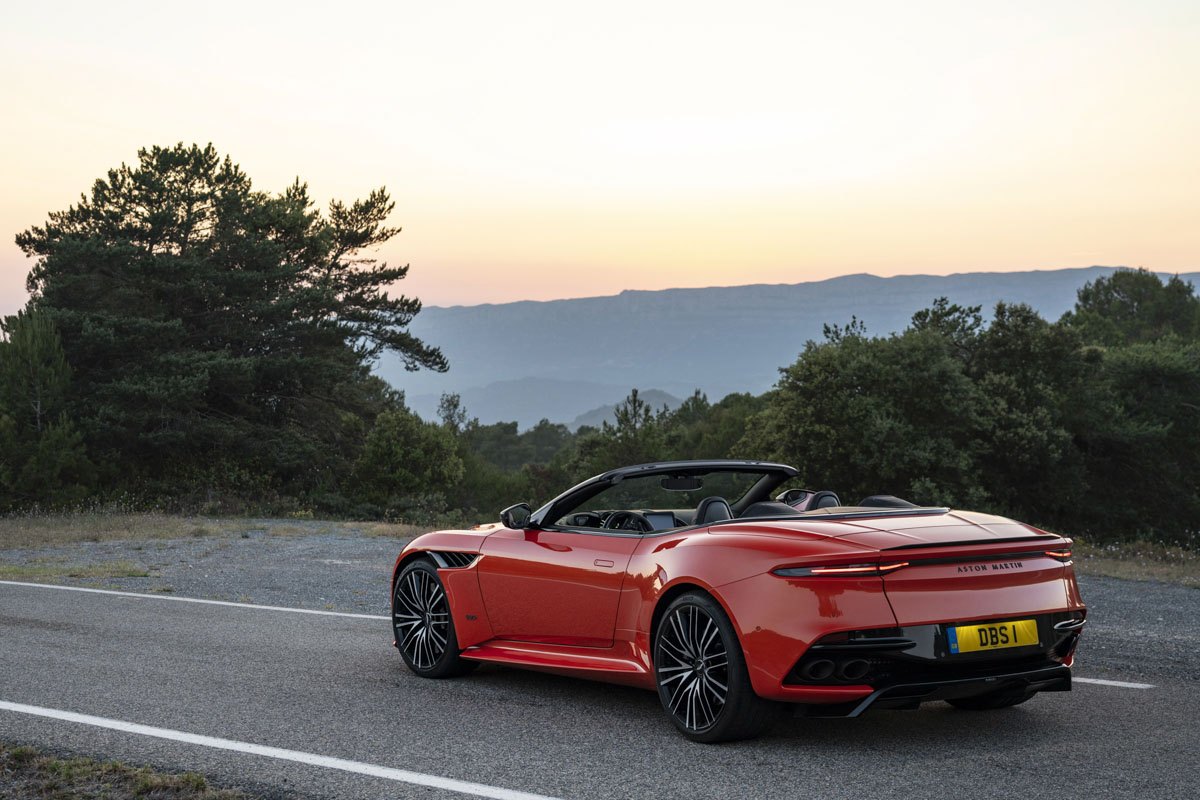 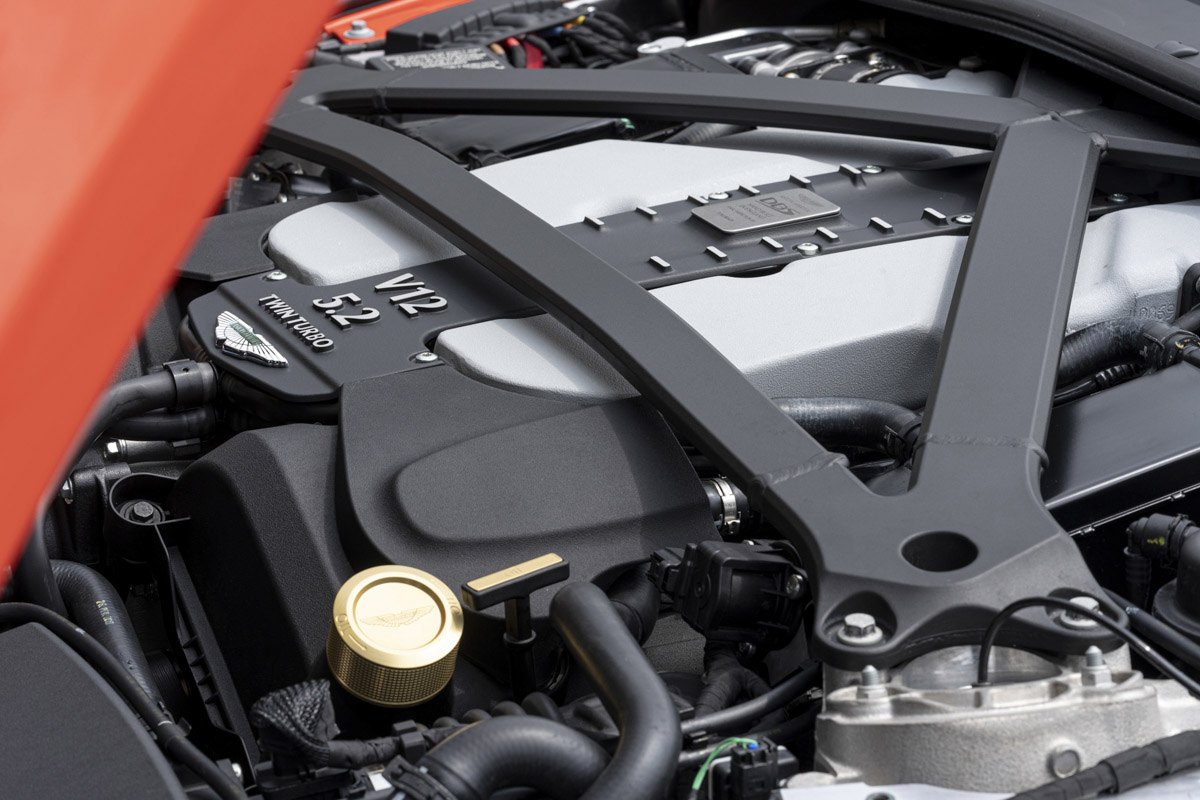 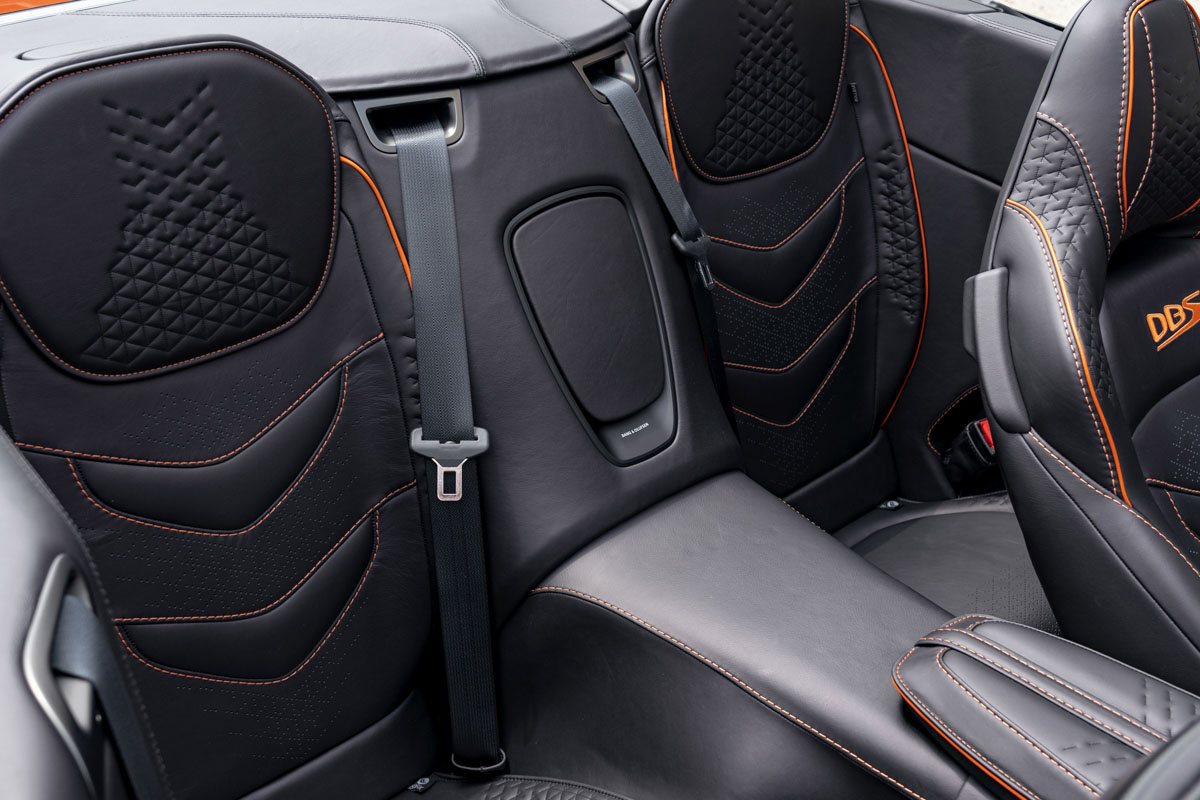 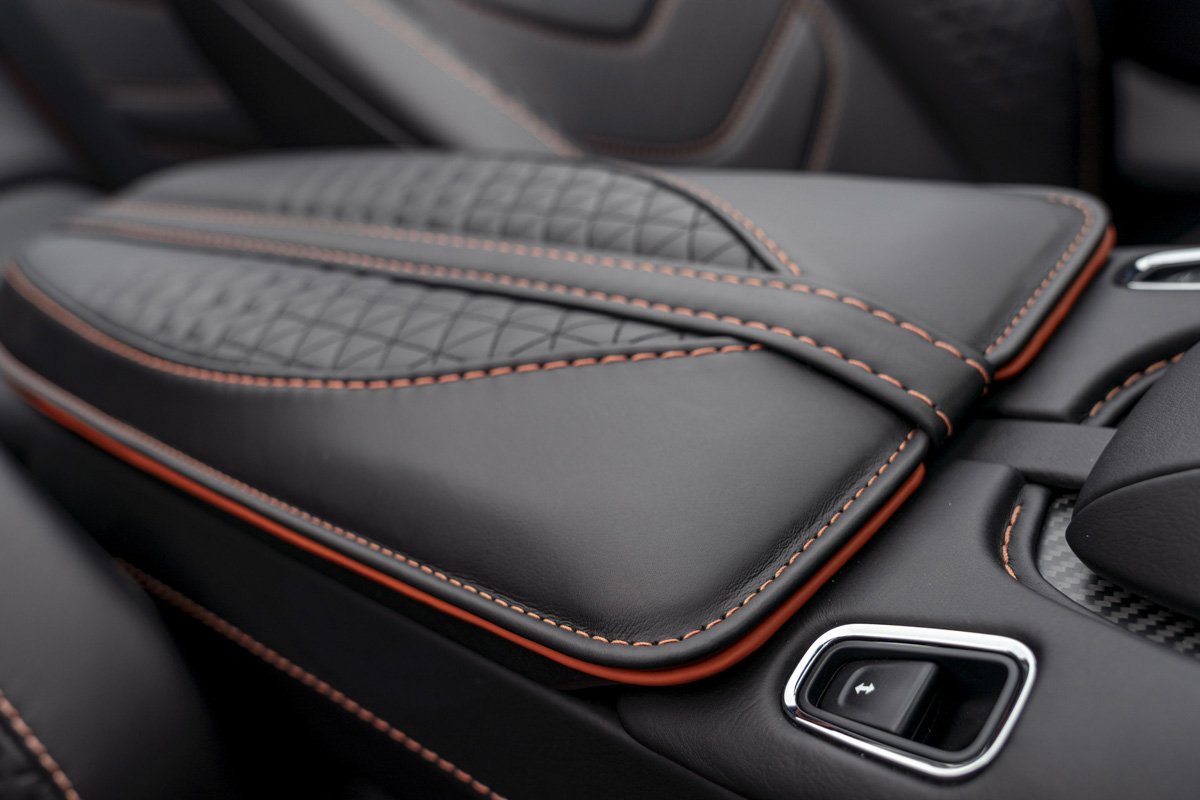 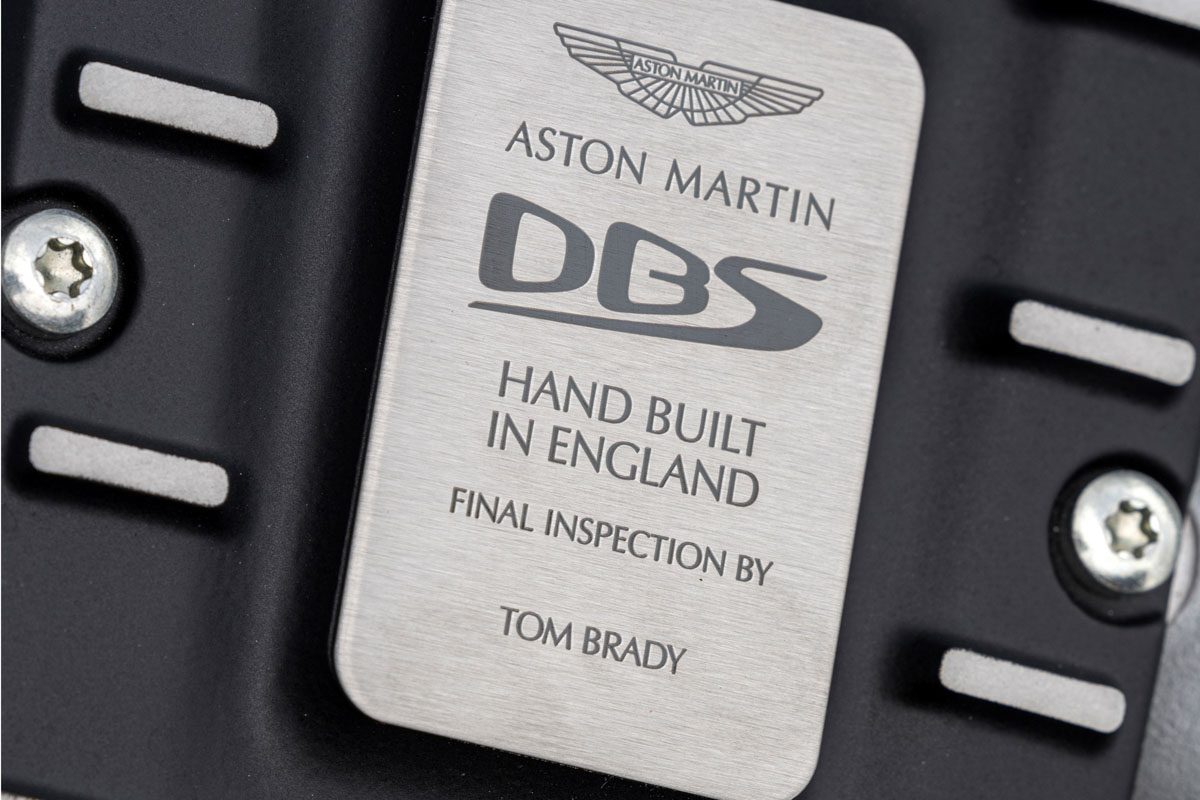 Aston Martin’s DBS Superleggera coupe found instant favour for its combination of striking, muscular looks and brutally potent 715bhp, 664lb ft biturbo V12. As the best model in Aston’s reinvented range it’s hard to imagine how the brutish super-GT could be improved. Could the new open-top DBS Superleggera Volante be the answer?

In terms of outright performance there’s no open-top car to touch it. With the same 340kph top speed as the coupe (roof up or down!) the Volante is the world’s fastest production convertible, which unsurprisingly also makes it the fastest soft-top in Aston’s history.

Beneath the long, immaculately sculpted bonnet sits Aston’s own 5.2-litre twin-turbocharged V12, which is linked to an eight-speed ZF automatic (the only gearbox option) by a carbonfibre propshaft. Producing the same 715bhp and 664lb ft (the latter from just 1800rpm  through to 5000rpm) as in the DBS coupe, the Volante hits 100kph from a standstill in 3.6sec and 160kph in 6.7sec, which is just a few tenths shy of the coupe due to the drop-top being 100kg heavier.

Discreetly effective ducted aerodynamics were a key element of innovation in the DBS coupe, and so you might expect the Volante’s fabric hood to interrupt some of the clever airflow management. However, revisions to the rear diffuser and Aeroblade II work in unison with the front splitter and functional side strakes to ensure there is only a fractional drop in downforce, to 177kg (from 180kg) at V-max.

As ever with Aston Martin, great attention has been paid to the Volante’s styling so that the only perceptible difference is the fabric roof. In reality the rear haunches are subtly but entirely different, being fractionally wider, while the rear deck continues the raised lines that lead back from the bonnet and continue along the roof of the coupe. Roof raised or lowered it’s a devastatingly handsome car.

Much like the coupe, which is about as big a compliment as you can pay to a convertible car. Especially one that rides on 21-inch rims, boasts more than 700bhp and has a sporting chassis set-up. Of course there is a price to pay in terms of structural rigidity, but even nasty sequences of potholes or ridges struggle to betray you’re in anything other than an anvil of a car.

Roof up you’re cocooned in a very high level of luxury and comfort, if not quite at the dazzling level of a Bentley. With so much torque from so few revs the Volante makes imperious progress, with the merest squeeze of your right foot providing ample propulsion. It fosters a tremendous feeling of confidence and relaxation that’s utterly seductive and surprisingly soothing. At least for a car that’s capable of 340kph with roof raised or lowered.

Lower the roof – a process that can be done at speeds of up to 48kph and takes just 14 seconds – and the Volante brings another dimension to the DBS experience. With windows and anti-buffeting screen raised you’re treated to a refreshing ruffle of breeze, but nothing intrusive, even at speed. The turbo V12 isn’t quite so vocal as Aston’s old naturally aspirated motors, but there’s still plenty to enjoy in its potent, turbine-like growl, with a few pops and crackles on a closed throttle. The eight-speed ZF auto is a slick and willing partner, and a pleasure to leave to its own devices or work via the paddleshifters.

Dynamically the DBS Volante has a tremendous breadth of ability. Never less than responsive, nonetheless it happily settles into an easy cruise and rides with a pliancy that belies the size of its boots (315 section rears!). Toggling between dynamic modes via the steering wheel-mounted button is a bit of a fiddle, as you have to cycle all the way through them rather than go back and forth, but each stage is nicely judged and brilliantly effective.

Unsurprisingly, when you do decide to open the taps the Volante erupts forwards, punched down the road by all that torque. Honestly it feels a bit much to start with, at least in the lower gears, such is the ferocity with which this 1863kg (dry) machine is hurled, but you soon learn to s-q-u-e-e-z-e into the throttle in fourth or fifth and marvel at the seamless and apparently limitless reach. Either way it’s an epically potent car.

Fortunately the brakes are mighty, and now easier to modulate thanks to revised brake booster calibration. Still this is very much a super-GT and responds best to being driven as such. That’s not to say it won’t smoke through a corner like a Vantage if you disable the ESP, but its party piece is the way it switches between suave and savage as mood and opportunity takes you.

With a starting price of $311,095 the DBS Volante is $28,281 more than the coupe. Rivals are few and far between, for even Bentley’s new super-luxe W12-engined Continental GTC is priced well below and doesn’t offer the same level of performance. Being an Aston there’s plenty of scope to personalise, but it comes at a price. Of the two Volantes we tried on the launch one was priced at a little over $354,500 with options, the other just shy of an eye-watering $379,600. That’s big money for sure, but right now it’s hard to think of a more desirable convertible.