The last of a dying breed, the Morgan Aero Coupe takes one last spin before bowing to the new Aero 8.

When it first appeared on the scene in early 2000, the Aero was a revelation for Morgan. Though its muscular haunches and low slung profile still harked back to the 1930s – a company tradition for 90 years, even then – the Aero was the first brand new design from Morgan since 1948, and thus was much more than just a facelift.

While preceding models did (and indeed still do) boast a steel chassis and a wooden body, at the base of the new Aero was the first aluminium chassis ever fitted to a Morgan, vital to increase the vehicle’s structural rigidity and thus, improve the handling. Beneath the double-hinged bonnet of the-then new Aero lay a 4.4-litre V8 from BMW, and while the company still eschewed anti-roll bars, the archaic sliding-pillar front suspension was given the heave-ho in favour of an independent setup for better manoeuvrability. Even the bodywork had been designed to improve the aerodynamic flow, albeit with some minor side effects: the coupe’s much-maligned ‘cross-eyes’ was a result of the headlamps being sunk so deeply into the wide, sweeping front fenders.

No doubt, the Aero was the most technologically advanced on Morgan’s books, a design that helped the company double its production, and begin expanding overseas. 15 years later, given Morgan’s increasing reach through Al Futtaim Motors, that includes the Middle East, which brings us to the model you see here.

It is the last ever factory-fresh fourth gen Morgan Aero Coupe that will make its way to the region. And given that its replacement – the brand new Aero 8 – is set to arrive later in the year, that’s got us wondering what kind of performance this ‘high-tech’ Morgan has to offer. 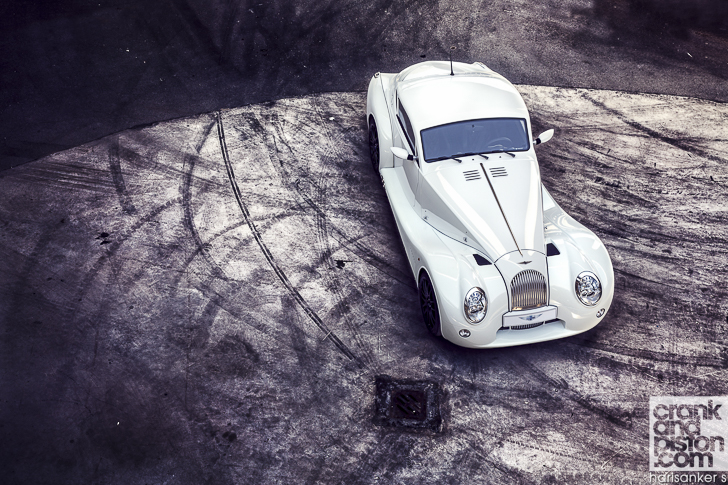 Let’s start with the looks…

Though it may look slightly comical compared with its more mainstream rivals, the 1930s-esque design is largely unchanged a decade and a half after its debut, save the ‘new’ stretched rear window that replaces the old dual-split example. The cross-eyes have also been gone since 2007, Morgan replacing the old VW Beetle bulbs with lamps from a MINI Cooper. It’s a striking and quintessentially charming look, but it’s the cabin that’s spiked my interest.

To say the cabin is ‘driver-focused’ would be an understatement: the low roofline, bizarrely tight footwells, a high transmission tunnel and a steering wheel mounted very close to the chest leave me with little space: there’s almost no room to move my left arm, cushioned snugly as it is by the leather-clad door panel. Given that the cabin in this generation is 6in wider than its predecessor and that the doors have been pushed out further over the running boards to make getting in and out easier, I can only imagine what room in the old model must have been like.

In stark contrast to the retro exterior, the inside is far more modern. SatNav, cruise control and leather seats combine to add a snazzy, modern twist to the nostalgia, and while it may feel tight, the minimalist layout is at least mercifully straightforward. Saying that, I do find myself questioning the build quality: in some areas, the leather upholstery has not been cut particularly well (not what I’d expect from a $162K sports car), the indicator stalks look like they’ve been plucked from a Mk IV VW Golf, and with no support mounts to speak of, the floor mat keeps intermittently sliding beneath the brake pedal. I’d also like to ask why the seatbelt warning chime has to be so shrill: the last alarm that penetrated my eardrums to this extent at least had the decency to tell me the building was on fire… 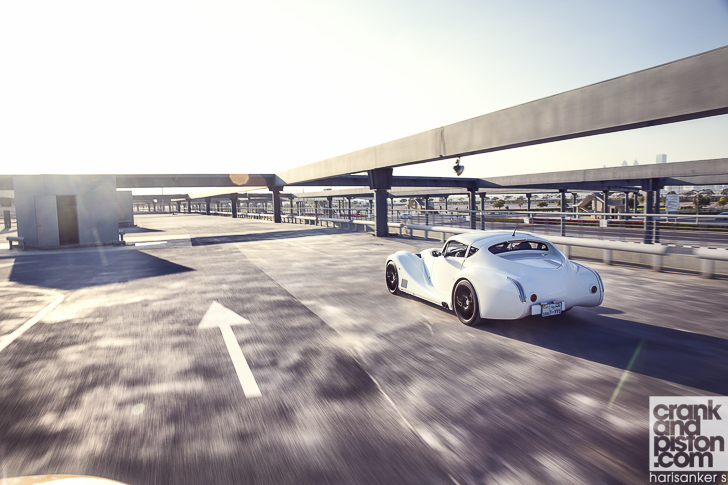 Aside from that, how about the drive?

Fortunately the Coupe survives further onslaught when I slide the key into the steering column and twist. The old 4.4-litre V8 has been upgraded in our test model to the same 4.8-litre example that powered the E60 BMW 5 Series, E63 6 Series and the E70 generation X5, the drivetrain completed by the six-speed automatic nicked from the 5 Series. Said V8 produces not only 367bhp and 370lb ft, but also an utterly gorgeous bellow from the side-mounted exhausts. It’s a low, brutal belch, more rooted and aggressive than anything else on Morgan’s line-up and resonates around the cabin, rendering the aftermarket stereo obsolete. Even despite the snug contours of the seats, a chill tears down my spine, and I haven’t even turned a wheel in anger yet.

Much like the split nature of the Morgan design, the acceleration is a tail of two halves. Huge amounts of torque in the lower revs means pick-up is strong, 367bhp offering linear pull. Shifts through the six-speed gearbox are similarly swift: there are no paddles, but the sequential gear shifter is easy to punish. All this changes though when I hit 4000rpm, the formerly gutsy acceleration now lacking energy, sizably knocking the sensation of speed as a result. With 0-100kph taken care of in 4.2 seconds and with a top speed of 273kph, the Coupe is certainly quick, but the punch of Morgan’s most technologically advanced model is not as dramatic as I’d hoped. Despite the soundtrack.

Saying that, it’s the agility through the corners where Morgan has really played its trump card. The steering is nicely weighted if perhaps lacking in direct feedback, but well-judged suspension geometry offers quite superb road holding through the corners without simultaneously crashing over rutted tarmac. There’s little, if any, lean through the corners, allowing me to push the Coupe harder through the turns than I’d imagined. Admittedly, given the enormous bonnet and the seats being mounted so far back, it does feel like I’m sitting on the rear axle, a sensation further compounded as the front wheels turn (BMW Z3 owners might relate to this). It’s a shock for the first few corners, but after a while it does start to make sense. This point and squirt nature creates superb agility, allowing the limits of the Coupe to be exploited yet further. All the more interesting that there seems to be no way to turn the stability control off. 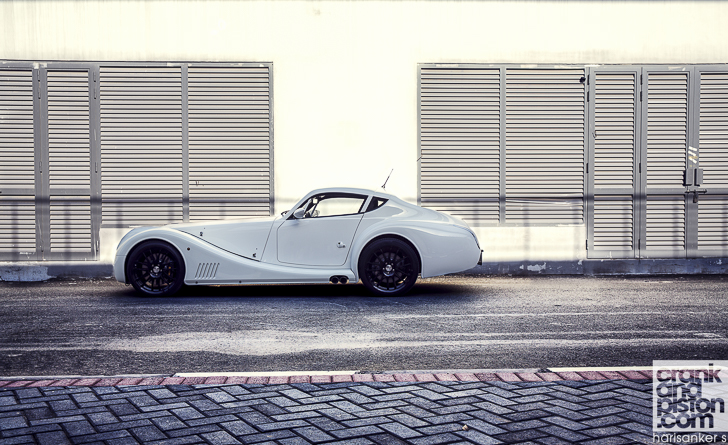 So, what’s the overall verdict?

I’m relieved to find then that despite the more modern approach, the innate character indicative of any Morgan product has not slipped through the cracks with the Coupe. And yet while my previous experiences have highlighted the sounds and the head-turning appeal, here it’s all about the handling. There’s little sense of electronic nannying involved, leaving its driver to simply get on with it, engaging fully with nicely weighted steering and commendable throttle response. Whether, as always, Morgan can tempt buyers away from the similarly priced Bentley Continental GT and Aston Martin V8 Vantage remains to be seen. That the Aero 8, given the base it has, could well be something truly spectacular when it arrives is beyond question. 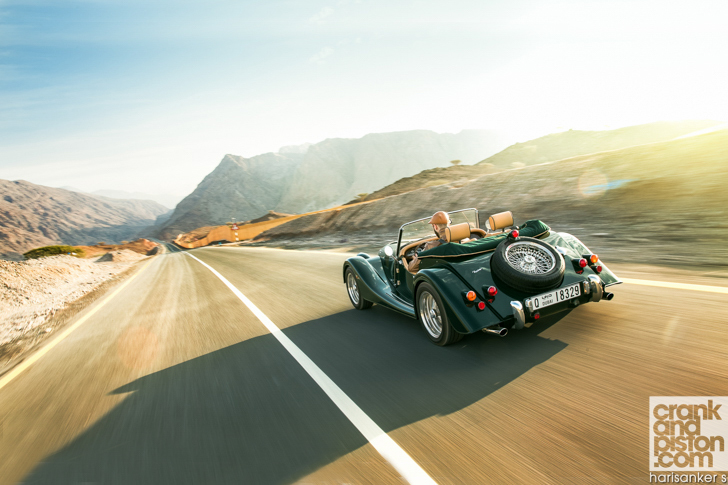