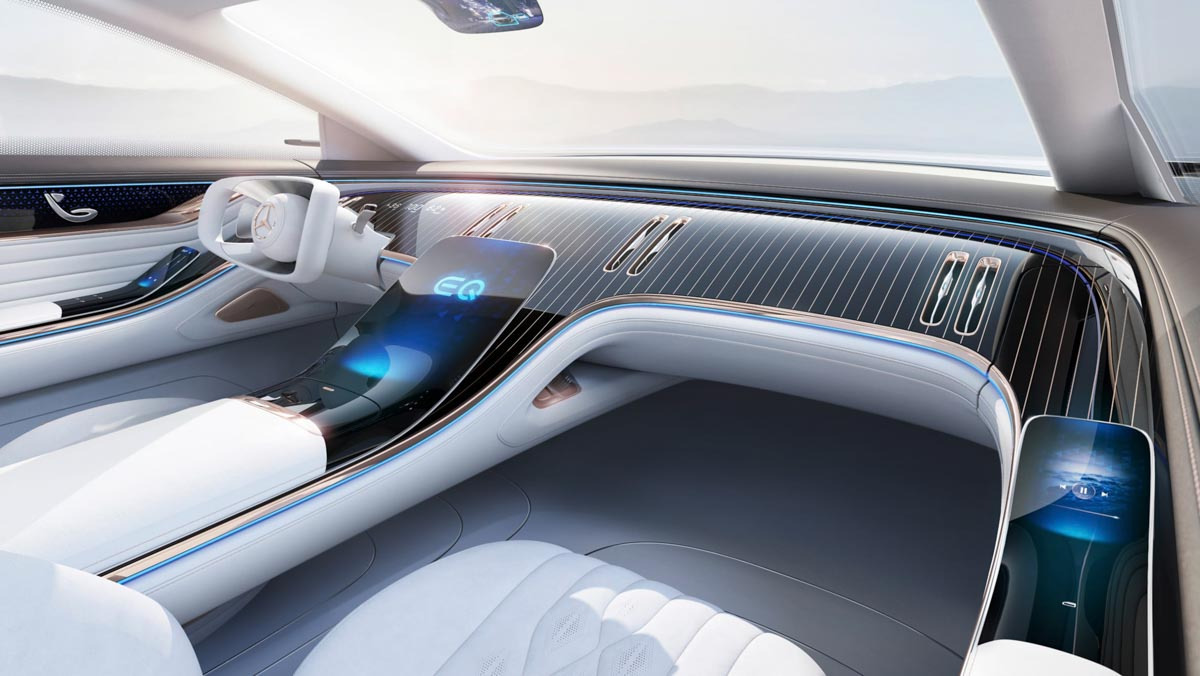 The Mercedes EQS first made an appearance in concept form at the 2019 Frankfurt motor show, and although the production article is still yet to surface, Mercedes-Benz has given us a first look at its ‘Hyperscreen’ infotainment system. For the full reveal you’ll have to wait until later in 2021.

Expanding on the MBUX system first seen in 2018, the EQS will receive an array of displays spanning the entire width of the cabin, fitted under a single piece of glass to create the illusion of a continuous display. Utilising OLED technology for everything but the driver’s display, the system is designed to offer passengers plenty of entertainment on the road, with artificial intelligence integrated to adjust the setup to suit each user best. Despite the high-tech approach, you’ll still find manual air vents at each end, something that can’t be said for some EVs of recent times.

While the EQS’s dramatic looks are most likely to grab your attention, it’s what the EQS is built on that is most significant. It’s an entirely new platform that can be used for a variety of different models thanks to its scalable architecture. The batteries are installed deep in the floor between the axles, and thanks to the nature of this modular system the wheelbase, track and battery size are all variable, making it suitable for an entire range of EQ models.

Specs of the production car are still under wraps, but the concept features a brace of electric motors – one on each axle – with a combined output of ‘over 350kW’ (that’s 470bhp in old money) and a torque output of 560lb ft. That’s enough to endow the EQS with a 4.5sec 0-100kph time and a top speed of around 201kph. Thanks to a 100kWh battery capacity Mercedes reckons the EQS will have a WLTP-equivalent range of around 700 kilometers, and once charging technology catches up a 350kW charger could replenish the batteries from zero to 80 per cent in just 20 minutes.

The concept’s low, sleek shape is constructed from a mix of materials – steel, aluminium and carbonfibre, plus a proportion of recycled materials. The shape is accentuated by huge 24-inch wheels pushed to the extremities to increase passenger accommodation, and the exterior features a swathe of LEDs in a ‘lightbelt’ that stretches around the car giving the impression of a black panel glass passenger cell floating over the lower part of the car. At the front there’s a digital grille consisting of 188 individual LEDs in the shape of three-pointed stars, and the theme is continued at the rear where there are a further 229 similarly shaped LEDs. This plethora of LEDs apparently allows the EQS to ‘provide a new level in precise signalling’, while the role of the traditional headlamps has now been taken over by a pair of holographic-lens items, each featuring a further 500 LEDs.

Inside there’s the usual range of concept car excesses all backed up by a reassuring mix of sustainable materials. There’s microfibre cloth made from recycled plastic bottles, maple wood trim, artificial leather and a roof lining constructed from a textile produced from recycled ocean waste. Overall the interior design is said to take its inspiration from the world of luxury yachts and this is personified by the wood trim that runs from front to back, forming a sculpted shape that cohesively links both parts of the passenger compartment.

Naturally enough for a future-orientated machine it is said to feature a level of autonomous driving – Level 3 in this instance – but Mercedes says that thanks to the sensor systems this could be scaled up to fully autonomous driving in the future.

Mercedes-Benz is set to reveal the production EQS in full later this year.