Another compact from Mercedes for those considering SUV ownership. But would you choose it over the A250 hatchback on which it is based? crankandpiston.com finds out by taking a spin as part of our #MissionJordan tour

“Not quite. It’s actually a crossover, in the same vein as the Nissan Juke, but a more premium example aimed at the BMW X1 and the Audi Q3. It’s Mercedes-Benz’ first example in the segment. Based on the A-Class platform, it’s essentially a hatchback with more practicality.”

“Well…not really, no. The platform is the same for both, only the GLA boasts fatter tyres and softer suspension for a more cushioned ride, plus an extra 50mm in ride height for a higher seating position and eyepoint. So it’s an A250, but a slightly taller version.”

I think you get the gist of the recent conversation I had with crankandpiston.com teammate James. Let’s face it, the GLA is a bit difficult to get a read on and has been since its conceptual debut at the 2013 Frankfurt Motor Show. The GLA is all about the ground clearance, offering as it does the DNA of a hatchback with the presence and practicality of a small SUV.

But is a top-heavy hatchback with a tri-star on the bonnet really what people are looking to buy? Is Mercedes’ first crack of the crossover whip misjudged? 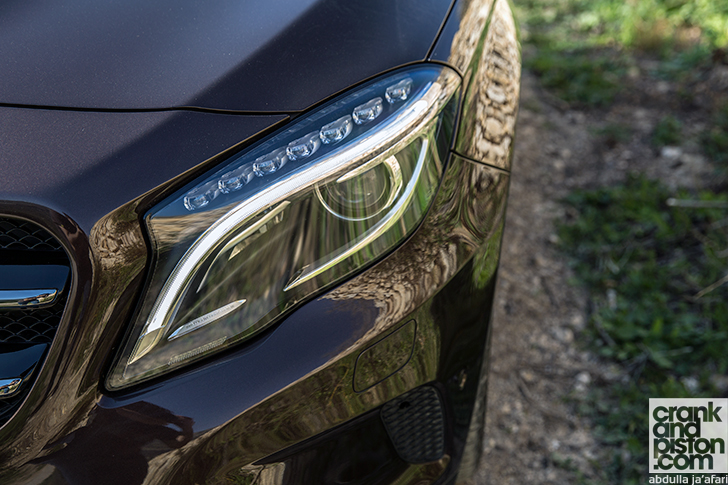 From a purely visual perspective, you certainly wouldn’t say so. Granted Mercedes’ ‘Tradition, Emotion and Progression’ design language may not be to everyone’s tastes, but the GLA’s look is a striking one. You can see some traditional Mercedes visuals in the dual bonnet lines, sharpened wing mirrors and oval-ish front grille, while the running daylight strokes provide a very modern look as do the tidy 17in wheels. But it’s at the back where I think Merc’s designers have surpassed themselves, the split dual exhaust tips and the sloping roofline subtle accompaniments to the more rugged body cladding and rear stance.

There’s a similarly sleek and modern look on the inside. Cabin room is plentiful, with enough headroom (just) for six-footers like myself, and a gargantuan boot space. The A-Class parallels continue across the dash, the bolted on infotainment screen, circular air vents and button-fest centre console familiar to anyone who’s taken a spin in the A250 Sport or CLA coupe recently. The only difference is the DSR (Downhill Speed Regulation) button, a nod to the new generation 4MATIC all-wheel drive setup available on all but the diesel-only GLA 200. Nothing too hardcore of course, since the GLA is ‘most confident on light terrain’…

Unlike the 200’s 1.6-litre four-cylinder, our GLA 250 test model comes equipped with a 2-litre turbo alternative that pushes 208bhp, and 258lb ft of torque. When combined with Merc’s 7G DCT dual clutch automatic transmission (standard on the 250, although a six-speed manual is also available), our GLA 250 will ‘sprint’ from standstill to 100kph in 7.1 seconds and has a top speed of 230kph. It’s modest performance at best, the top spec 355bhp GLA45 a more fiery option capable of hitting the ton in under five seconds. 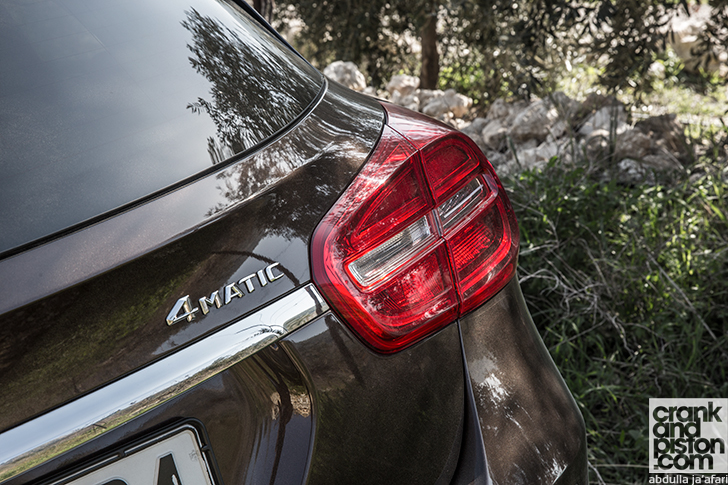 That’s not to say though that our GLA 250 test model isn’t surprisingly impressive through the turns. Yes, the more ‘long legged’ suspension means a slight trade off in handling for comfort, but the hatchback underpinnings do provide an impressive amount of balance through the turns, understeer only really starting to peak through when the nose is leant on heavily. It’s perhaps not as direct as its chief rival at Audi but the Merc is also much smaller. Measuring 100mm shorter than an Audi Q3 and thus a lower centre of gravity, I can’t imagine the moose test caused many issues.

Acceleration is linear, up to 50 percent of torque being sent to the rear axle for greater traction. There’s also more weight in the electromechanic power steering than you might expect, despite the servo-ed assistance. Don’t be fooled though into thinking the A-Class based GLA will handle like a hatchback. Built for comfort over thrashing, there’s little in the way of feel through the steering and though the 7G DCT is excellently refined, changes are smooth rather than crisp, even in Sport driving mode. And no, you needn’t get too carried away with that either. Engine revs sound more energetic as gearshifts are held longer and there’s a slight – ever so slight – tangible feel as the suspension arms stiffen, but we doubt you’ll want to chuck what is essentially a hatchback on stilts into the corners with particular vim.

The GLA’s blue ribbon therefore goes to the ride comfort, with artico leather seats, bags of legroom and supple suspension allowing it to eat up the kilometres. We would suggest though, if you are around the six-foot mark, to keep a kneepad handy: you will find the panel joint by your right knee – if leant on – will start to get quite painful into the first hour of your journey. 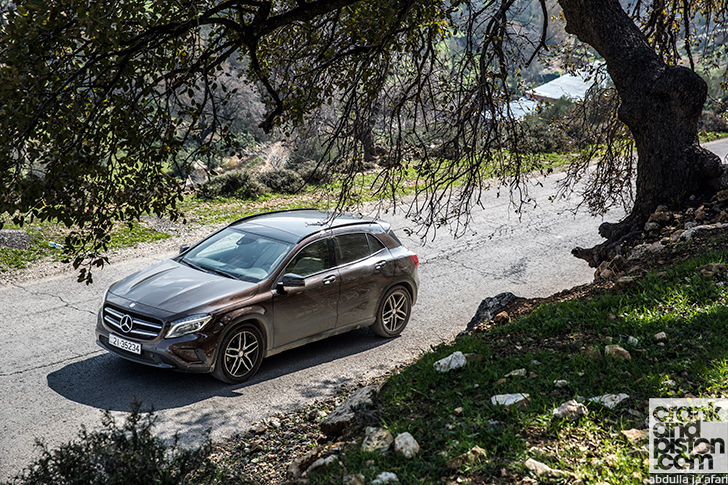 “So it looks the part, rides comfortably, and is more practical than a hatchback. Would you buy it?”

“Probably not for myself. I’ll admit the GLA handles impressively and is more hatchback than SUV than we’ve come to expect from crossovers in the past. Of course there is the GLA45, with more power, lowered suspension and a 4.8 second 0-100kph time. That sounds pretty good to me.”

“But wait, hang on. In that case, wouldn’t buying the A45 make more sense?”