How do we fit the entire crankandpiston team – plus camera equipment – into the Management Fleet Mercedes-Benz GL 500? Quite easily as it turns out. Unless there’s a puncture…

It’s not often that the entire crankandpiston.com need to be transported en-masse, in one vehicle, complete with camera equipment. It’s not every day though that we shoot a Ferrari 458 Speciale, and – wouldn’t you know it – come the day itself, suddenly everyone in the office was keen to help out. Funny that…

This did of course leave us with a few logistical issues. With all three rows of our long term GL’s seats locked upright, boot space in the big Mercedes is surprisingly slender, allowing room for only a couple of bags and maybe – if we were lucky – a camera or two. The lack of anything even slightly resembling a trailer in the crankandpiston Oval Office meant the GL’s towing hook didn’t offer a solution either, which consequently meant all seven members of the team would be loaded carrying one (and more than likely two) items of digital equipment.

Limited space in the third row (seats mounted over the rear axle means reduced headroom) presented yet another issue, namely which of our unlucky septet would endure a rather cramped ride. Given that I stand more than six feet tall – and since most of the team knew how much I would moan – this meant I was out of the running, as were two of my fellow lofty colleagues. A particularly fraught paper/rock/scissors tournament eventually decided our unlucky duo. 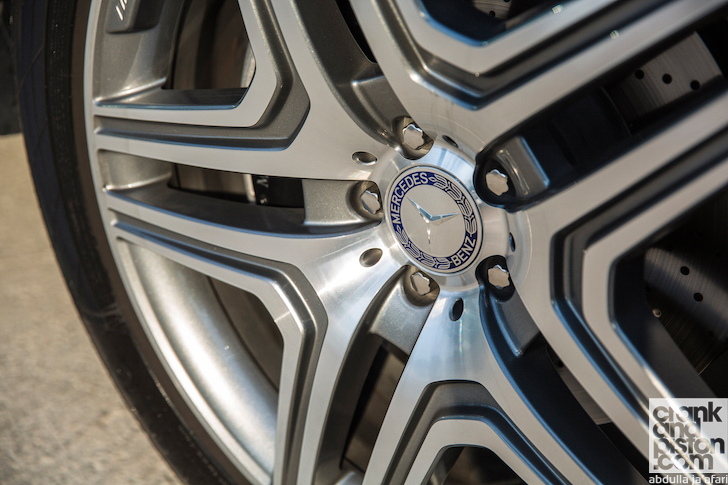 Keen as I was to empathise with my now furrow-browed teammates on the third row (and the slightly perturbed three on the second row, for whom elbow room was at a premium), in all honesty I was too busy enjoying my time at the wheel and the comfort that comes with it. As well as full connectivity, our full-fat GL also provides seat coolers for the lucky two in the front, as well as seat massagers. Turns out though that driving cross-eyed whilst ‘Fast and Vigorous’ does a number of your shoulder blades is rather tricky.

It would be reasonable to expect that the addition of seven grown adults plus camera equipment would play merry hell with both the 429bhp V8’s acceleration and the Merc’s suspension. Hardly renowned for standing quarter mile times, the GL 500 nevertheless does deliver some sizeable poke, even with a full load.

Journey complete, a warning light suddenly illuminated suggesting a slow puncture on the driver’s side rear tyre. The pressure having dropped considerably after our Maranello-tinted shoot, a quick top-up was required. And since everyone else was either locked on the back row or holding a piece of camera equipment (sometimes two), there was only myself left to do the needful.