Might Mercedes’ 5-Series rival be the start of a new future of motoring? crankandpiston.com finds out with a spin in the new Mercedes-Benz E400 4MATIC in Lisbon, Portugal

Mercedes is making a big deal of the amount of tech crammed into its fifth generation E-Class (or tenth, if you count facelifts). A long-standing rival to BMW’s 5 Series and Audi’s A6, it’s positively stuffed with clever gadgets to keep you digitally connected, stop you crashing into things, help the car perform better dynamically, and prevent you from dying quite so much if you somehow still manage to bin it. There’s so much silicon and sensors in fact, that the tech deserves a section of its own. Therefore what follows is a brisk drive summary that skips over the gadgets somewhat.

We opt for the most potent of the new range at the launch in Lisbon, Portugal; an E400 4MATIC powered by a twin-turbocharged, 3-litre V6, producing 328bhp and 354lb ft, which is sent to all four wheels through a nine-speed automatic transmission. Looks wise, the new Mercedes is basically a small S-Class or large C-Class, with lots of curves, a coupe-like roofline and some optional ‘stardust effect’ rear lights that are intended to evoke the glow of a jet engine. It’s slightly larger than its predecessor, but it is lighter: up to 100kg has been shaved off the various models thanks to some judicious aluminium use.

The interior is really impressive. With a design theme again borrowed from the S-Class, it’s stylish and contemporary, and when darkness arrives some very fancy interior lighting adds to the ambience. The cockpit sets the tone for a car that’s been very well thought out and put together. Performance from the E400’s V6 is more than decent, with 100kph coming up in 5.3 seconds accompanied by an insulated but full-bodied whirr from under the bonnet. Switch the car to Sport+ mode and you’ll feel the steering stiffen and the throttle response increase markedly, with the added, unexpected bonus of some delicious exhaust crackle, reminiscent of the V6-powered C450 AMG we drove last year. Expect the forthcoming Mercedes-AMG E43 4MATIC to build on this. 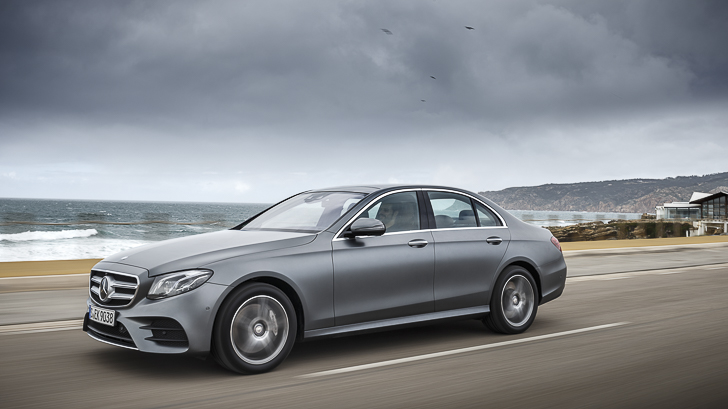 The E-Class range as a whole though is more geared towards comfort than sportiness. The ride through adaptive dampers is smooth and unworried by Lisbon’s legendary potholes. Wind and road noise combine to little more than a distant whisper, leaving occupants to enjoy the excellent Burmeister stereo system that croons from exquisitely sculpted grilles on the doors, A-pillars and even the roof. As we move from highway onto twisting hilly roads, I’m impressed by the car’s composure, and although the steering is too light in Comfort mode, a flick through the settings to Sport stiffens it up nicely.

While flooring the throttle and enjoying the traction from all four wheels has a certain appeal, the E-Class feels more like a car to drive serenely, a machine with which to enjoy a cruise rather than assault apices. The seats are sumptuous and the whole experience is supremely relaxing. By the time the day ends, I find myself wondering why I’d want to spend the extra on an S-Class. More legroom maybe?

At the Estoril circuit outside Lisbon, we’re given a short taste of what the E400 can do when freed from the constraints of the road. For a large car geared mostly towards comfort it’s remarkably composed through Estoril’s twisty back section, changing direction with a keen nose, neutral attitude and little trace of the lumbering one might expect, thanks in large part to Dynamic Body Control, the cleverest of three available suspension systems. It also resists understeer when accelerating out of a bend, the 4MATIC all-wheel drive providing excellent traction. Sport+ mode gives leeway for movement at the back end and enough stiffness in steering and suspension to provide a level of engagement that we honestly didn’t expect. The E-Class is far from a sports car, but based on the three-lap stint we’re allowed on track, it doesn’t shame itself at the limit. 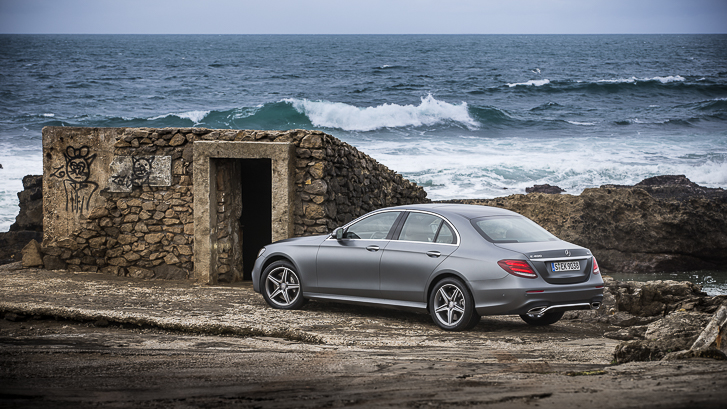 The new E-Class is hugely impressive in terms of features, comfort and quality. It might lack a bit in genuine driver engagement, but it’s deliberately focusing more on providing comfort and technological advancement than adrenaline. Besides, the boys from Affalterbach will have their chance to remedy that when the AMG-tuned E-Class models are launched at the end of the year, and this is a splendid base for them to work from.

In the meantime, the new mid-size saloon from Stuttgart is a technological tour-de-force, supremely comfortable and eminently capable.

Previous ArticleVIDEO. Volkswagen GTI. Back to the Roots
Next Article On-track with the SRT Viper ACR. Set 1