McLaren has released the first teaser image of its upcoming Sport Series model, which is set to rival the Audi R8 and Porsche 911 GT3. 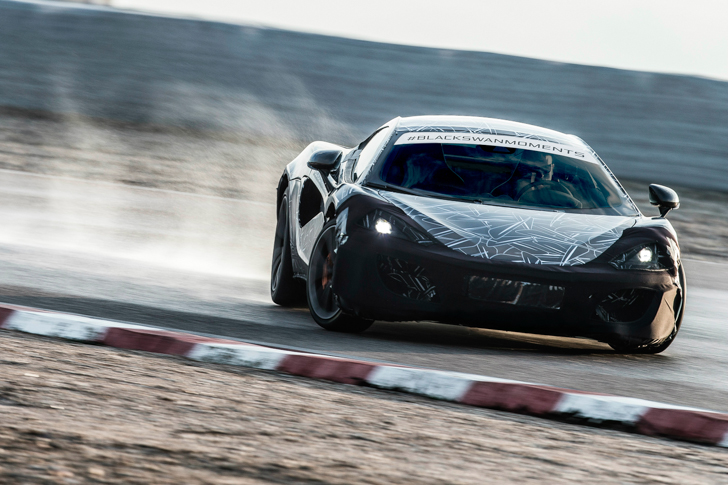 As part of McLaren’s #BlackSwanMoments teaser campaign (a symbol first utilised in 1697 to convey a moment that changes the way we look at the world), this latest image marks the first time Woking has revealed the look of its new entry-level model. A full unveil is set to take place at the New York Motor Show, with prices suggested anticipated to start around the $190,000 mark.

The new Sports Series – previously codenamed the P13 – is the first all-new McLaren to be unveiled since the P1 hypercar made its debut late last year, although performance-wise the Sport Series lies at the other end of the spectrum.In terms of the newboy’s looks, McLaren has not deviated wildly from the aerodynamically optimised design found on both the now defunct 12C and the 650S. Key differences though include a more rounded, more restrained front end (opposed to the more aggressive ‘P1’-esque features on the 650S) and front bumper. Closer inspection suggests the dihedral doors remain intact, though the wing mirrors have been mounted further forward.

Mechanical details have yet to be confirmed, though it is expected that the Sport Series will use the same 3.8-litre ‘M838T’ twin turbo V8 found across the McLaren board, which at present punches out 641bhp in the 650S and 903bhp in the top end P1 hypercar. The Sports Series however is unlikely to deliver anything like the latter, power speculated to remain around the 500bhp level in-keeping with the Audi R8 and Porsche 911 GT3 it will rival. Sub-four second 0-100kph sprint times are also being speculated.

Following the full launch of the Sport Series, convertible and track-going variants are expected to fill out the range as early as 2016 before Woking turns its attention to the brand new P15 supercar, which is set to fill the company’s line-up between the 650S and the P1.