McLaren P1 on track in Bahrain! Well, sort of

The P1, McLaren’s forthcoming hypercar, makes an appearance in Bahrain.

Hypercar fans, rejoice. For McLaren‘s P1 has finally touched down in the Middle East.

Don’t fire your guns in the air in celebration quite yet though. Although McLaren brought its forthcoming tarmac-curler to Bahrain, and even took this picture of it at the Bahrain International Circuit, it was merely part an invite-only preview peek for a select few VIPs. Which means you won’t be seeing it cruise the boulevards quite yet. In any case, it doesn’t have an engine yet.

Nevertheless, it’s a sign that the actual arrival of the car isn’t too far away. Officially, the P1 you see here is just a design study, but it’s due to be confirmed for production any day now, with the first cars expected next year. And according to Middle East McLaren boss Mark Harrison, the order bank in the Middle East is already filling up.

Those that have put their money down (don’t ask how much – that means you can’t afford it) are looking forward to what promises to be a revolution in aerodynamic performance for a production road car. It’s built around a carbon monocoque called the MonoCage, and the carbon fibre panels affixed to it provide up to 600kg of downforce on the move – enough to glue it to the tarmac around corners. It’s also got an automatic rear wing that adjusts to keep the car balanced, and a drag reduction system (DRS) as found in Formula 1.

Hurry up McLaren, we want to see the real one. 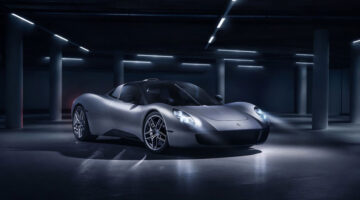