crankandpiston.com takes McLaren’s new 650S Spider for a spin on home turf. Is ‘the new 12C’ really all that? 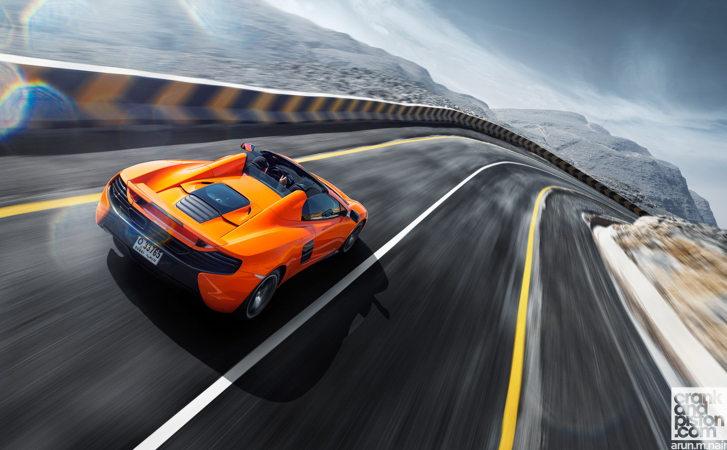 Image 22 of 22
Last year, McLaren’s brand new 650S arrived on the automotive scene with arguably more to prove than any supercar in recent memory. As the second ‘mainstream’ model to roll off Woking’s production line, the 650S took everything that was great about its first sports car and made it even better, ironing out the wrinkles as it did. Criticism was rife upon the 12C’s debut for instance that a clinical, meticulous company like McLaren couldn’t imbue the same passion in the supercar world as the Ferraris, the Lamborghinis and – latterly – the Paganis, an argument made easier by the 12C’s ‘conservative’ styling.

Take a glance at the 650S’ top trumping specsheet, and McLaren is off to a good start. The mid-mounted M383T 3.8-litre twin turbo V8 winking at us beneath the glass engine cover has received new pistons, cylinder heads and exhaust valves as part of key technical revisions, upping the power from 616bhp and 441lb ft in the 12C to 641bhp and 500lb ft in the 650S, which simultaneously knocks the 0-100kph time down from 3.3sec in the 12C to a flat 3.0 in the 650S. The 650S comes with 25% new parts – including changes made to the aerodynamic, driver assistance technologies, and styling – and takes lessons learnt from the P1 to levels the likes of which the 12C could only dream to produce McLaren v2.0: even the ‘MC1’ branded tyres have been exclusively developed alongside the team’s technical partner Pirelli for improved grip and performance. Many would argue then that the Woking boffins have produced the goods. Were it not for one slight issue…

Originally, the McLaren board was adamant that the new 650S was NOT a replacement for the 12C, the 641bhp $285K newboy instead ‘an additional model alongside’ the 616bhp, $250K 12C and the 903bhp $1.4M P1. ‘Believe us,’ came the cry from Woking, ‘the 650S will not replace the 12C’. A week later production of the 12C ended, and new owners – having forked out for what they believed to be McLaren’s entry-level model – were seriously pissed. Why spend a quarter of a million dollars on a sports car whose value could now only go down? And throughout all this, the 650S still had a reputation to gain. 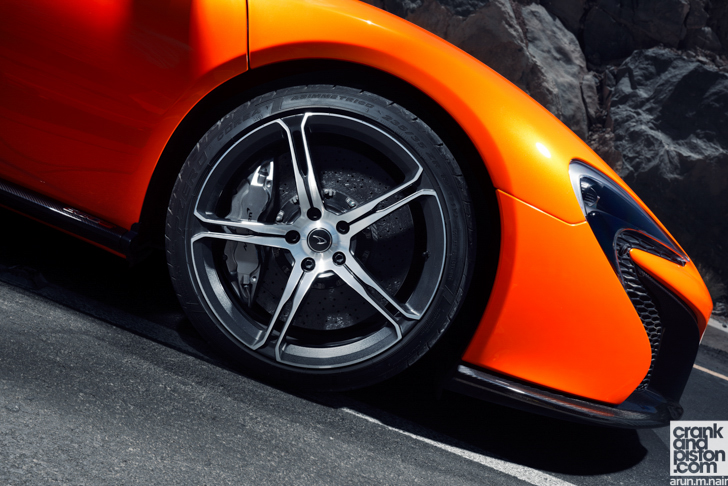 Fast-forward to today, our Toracco Orange Spider test model, and this road. We’ve previously sampled the 650S on the track, but now it’s time to find out how ‘the new 12C’ handles the real world on home turf in the Middle East.

You find us 900m up a twisting mountain road just on the outskirts of Fujairah. It’s approaching mid-afternoon, mid-40 degree temperatures have struck, and we’ve been on the go since 5am (well, we wouldn’t want to hit traffic now would we?). And yet there’s an electricity in the air. The crankandpiston.com digital crew is swarming all over the car. En-route, passing motorists have slowed to wave, give a thumbs up, and grab what iPhone shots they can. Even here, in the middle of pretty much nowhere, shooting stops briefly every so often when a rogue Toyota Land Cruiser or Mitsubishi Pajero stops to ask about this ‘cool car’. You get the impression that there is something special about this new McLaren.

Let’s start with the looks. I’ll admit that on paper, I wasn’t overly sold on the newboy’s cosmetic surgery. The new dramatic style seemed a little too forced, as if Woking was making a point NOT to be conservative with its latest model. In the flesh though, things start to make more sense. The integrated splitter, sculpted side air intakes, and new front bumper are all part of an aerodynamic package inspired by the P1 (and that includes those LED headlights), the overall look a result of wind tunnel testing rather than Woking’s design department going mental with the crayons. I can’t quite bring myself to say the new look is ‘handsome’, but the amount of attention we’ve grabbed today means this new family design language is definitely striking. It’s a shame then that this P1-esque look hasn’t made it to the rear, where aside from a little extra carbon fibre and the 12C GT3-influenced three-piece bumper, there’s little to rave about. Garish as it is though, I do rather like those carbon fibre door blades behind the forged, lightweight ‘650’ alloy front wheels. 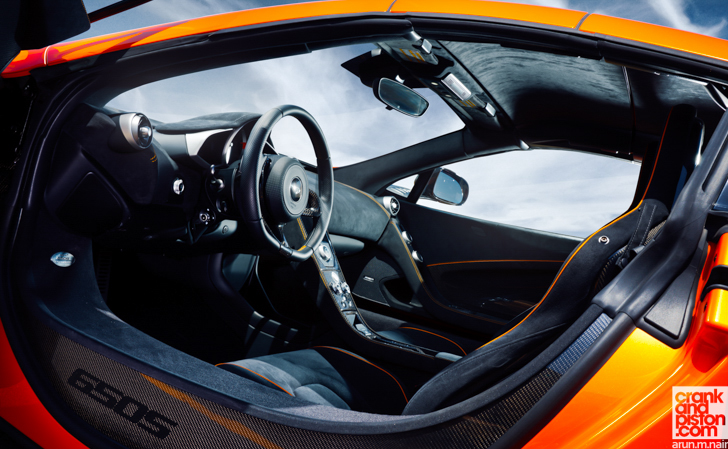 Press the almost hilariously understated stop/start button on the centre console, and the sound of that twin turbo V8 on start-up – coupled with the split-second whine of the turbochargers kicking into life – sets the hairs on the back of your neck going, even if you happen to be standing 2km away from the car. It may not have the sonorous pitch of an Italian supercar, or the deep basey notes of a muscle car, but the sound of a McLaren firing into life is hard to beat. The trump card of our Spider test model however is the folding metal roof. Wait 17 seconds for the two-piece Retractable Hard Top to fold itself underneath those rear buttresses (a cunning combination of space and weight saving alongside occupant safety courtesy of those roll bars), and the borderline aggression at the front end is softened. It might just be me, but the 650S as a convertible looks much better than its hardtop counterpart. Fortunately the roof mechanism hasn’t affected those dihedral doors.

We’re on a mountain road though, and to explain what does and does not look good to you dear reader seems a little superfluous. Having spent several hours shooting, then re-shooting the 650S, the crankandpiston digital team is similarly keen to see how this new McLaren handles the twisties…

To expect anything other than brilliance from McLaren would be ridiculous, and such proves the case as we begin winding our way back down 10km of mountain road. What surprises at first is the almost sedate way in which the 650S gets up to speed: press the loud pedal, and with its hypercar inspiration and retuned V8 engine, you’d be forgiven for thinking the 650S would rupture your spleen under even the daintiest of throttle inputs. But no. In the lower gears, acceleration – unless you really stamp on the power – is surprisingly gentle: linear and with a hint of rumbling aggression, yes (this is a twin turbo V8 we’re talking about), but gentle. This changes though when the McLaren is up to speed, this false sense of security making you pay in kind when you hit third gear and the high revs. The noise goes up, the hairs stand higher, and the acceleration hits a new energy. It’s not ‘spit you into the nearest wall’ energetic (the traction control is too responsive to allow that) but it’s enough to wake you up to the reality that this is a 329kph car. We’ve no hope of hitting that on these roads today, but it’s a realisation that makes me pull my seatbelt a little tighter. 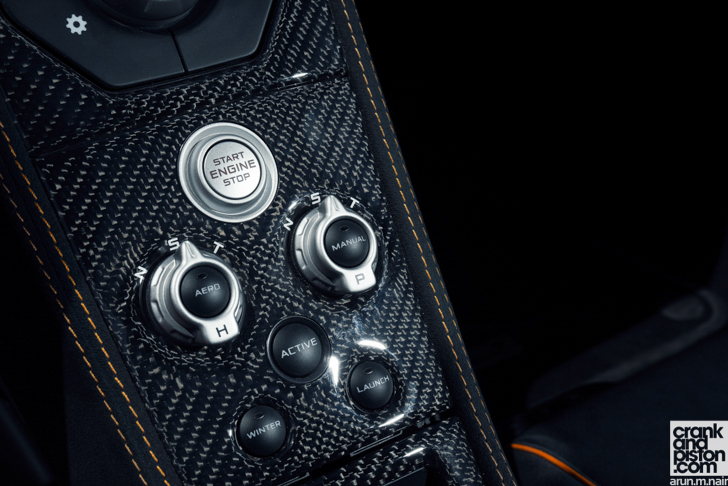 So far our day with the 650S has taken in more than five hours, and the lightweight, fixed back carbon-fibre racing seats have yet to erode my spine or sanity to dust. Both the ride and supportive seats are very stiff (currently the ‘Handling’ and ‘Powertrain’ settings of McLaren’s ProActive Chassis Control are set to Sport for that added dynamism) and yet somehow not uncomfortable. Little has changed in the Alcantara-heavy cabin design from the 12C – aside from the rather natty ‘650S’ moniker down the side of the doorsill – but frankly this is one area that didn’t need improving. Tight and confined for that sportscar vibe – the ‘S’ does stand for ‘Sport’, after all – but not uncomfortable. There’s even plenty of legroom, which says a lot.

Rounding the first few turns, the engine has been the shouty blue-ribbon winner, but to ignore the speed and efficiency of the seven-speed SSG paddle shift gearbox would be a crime. Like the 12C, shifts in the 650S are ‘blink and you’ll miss them’ fast, the dual clutch nature of the system (which has also, surprise surprise, been updated for faster and crisper shifts) lining up a gear in the brace, brace, brace position in readiness for the deft touch of your left or right hand. One of the issues I’m finding on this road however is the undulation, which – coupled with my low, low seating position – means I’m finding it difficult to see where I’m going. Hardly the car’s fault, particularly since it’s going to the trouble of lifting the rear spoiler/McLaren Airbrake when I crest a hill only to throw the anchors out for an unsighted tight left or right-hander.

One slight levied against the 12C – as we found out in our McLaren/Porsche 911 Turbo twin test a few months ago – was the on/off nature of the brakes: fine if you’re slamming on to avoid piling into a tree, but not so great for your neck if you want to ease to a stop gently. Fortunately the 650S comes with new carbon ceramic discs as standard, the life from which is greatly extended over its cast iron predecessors, consequently giving a greater feel through the pedal. Ironically, on this road, it’s difficult to test this to full effect. 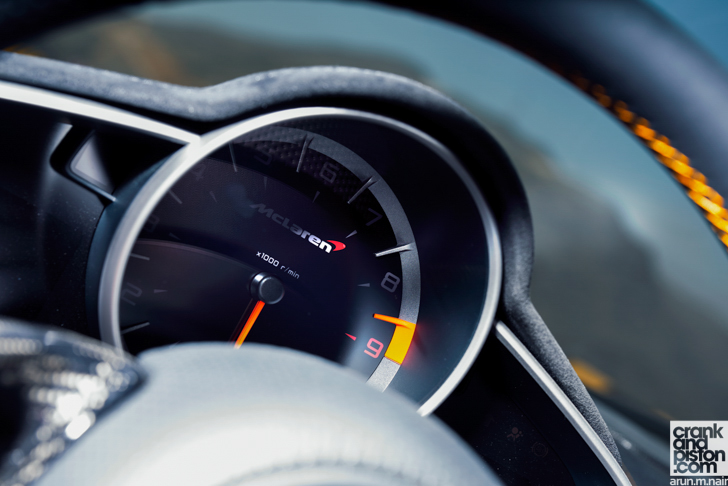 Once again, you’d expect steering feel to be inch perfect, and once again you’d be right (that front splitter taking effect). Connection to the front wheels is very impressive, as is the grip available, allowing the rear P-Zero Corsas to stay tight to the line as we round apex after apex. The updated wishbone suspension, in conjunction with the PCC system, removes bodyroll through the corners altogether, keeping the McLaren planted through the corners and allowing the driver to jump on the power earlier. I’ve no doubt that, letting the traction control off the leash by selecting Track would bring with it a whole new animal lairiness, designed to bite my head off and show the true potential of the 650S. The distance between said $285K supercar and the canyon walls though makes me rethink this idea, as does my own personal driving ability. I’m pushing hard, and we’re certainly not hanging around, but with the grip on offer, the power available, and the barely comprehensible stability helping to stroke my ego, I’ve no doubt the potential left in this car is immense. I’ve also no doubt that taking it to the edge requires larger cajones and razor-sharp reflexes, the likes of which I do not possess in my sock drawer. And therein lies another talking point about the 650S.

Compared with its now-predecessor, the 650S is quicker, more dynamic, and more stable. On paper. On a track and with the potential to go hell for screaming leather – sideways or otherwise – the full effects would no doubt turn your hair white. But in the real world, there just isn’t that opportunity to showcase the potential, which makes me consider the 650S’ relationship to the 12C all over again. Dynamically, the 650S is an evolution of the 12C – Woking rarely goes the wrong way when attempting to make something better – and there is consequently no doubt that the 650S is a phenomenal machine. Pinpoint accuracy and a staggering power output mean this day in the mountains is one I’m unlikely to forget any time soon.