Having completed my rapid ascension up the ranks of industry, and the various Maseratis that come with it, the opportunity arose to try the next logical step for the Trident enthusiast with the Maserati MC Trofeo and Gulfsport Racing.

When road cars no longer provide enough thrills, Maserati also makes a proper, dedicated racing car based on the GranTurismo. The MC Trofeo shares a shell with the road cars, but that’s about it. All the components are genuine race parts, hewn from carbon fibre and slick rubber. This particular car is a 2011 Trofeo car, and it’ll be one of the machines used in the new Maserati Trofeo JBF RAK Trofeo series, the first one-make, factory-supported race series in the Middle East. I find myself at the Dubai Autodrome for the first shakedown of the 2011 car. Gulfsport Racing, which looks after the cars for Maserati, is making sure everything works before testing proper begins, and they’ve kindly said I can have a go.

Visually, the Trofeo is very recognisable as a GranTurismo, but a quick poke around it reveals it to be a very different beast. The doors and panels are made from carbon fibre and weigh almost nothing. A huge carbon splitter sits below the front bumper, and a massive diffuser lurks under the rear. The dashboard looks familiar – the little clock in the middle is identical – but it too is made from weaved carbon, and the rest of the interior is stripped down and race spec, with a removable steering wheel, bucket seats and a bank of utilitarian switches and buttons to the right of the driver. After test drivers Martin Hope and Ramez Azzam do a few test bursts, it’s my turn. It’s prudent to say here that I’m not an experienced racing driver. Although I’ve driven plenty of powerful road cars on track, and karted for several years, my sole race car experience was a few laps around Yas Marina Circuit in an Aston Martin GT4. More than a year ago. On a dusty Autodrome, with its sweeping, high speed bends, I’m in uncharted territory.

Ramez takes me for a few passenger laps. The back end is pretty lively but as an experienced racer, with seasons in Formula 3 Euro Series and Formula Renault, he looks pretty comfortable. We come back in and Gulfsport boss Barry Hope warns me to take it easy. “Everyone goes too fast to start with,” he says. I assure him that I’ll be careful. 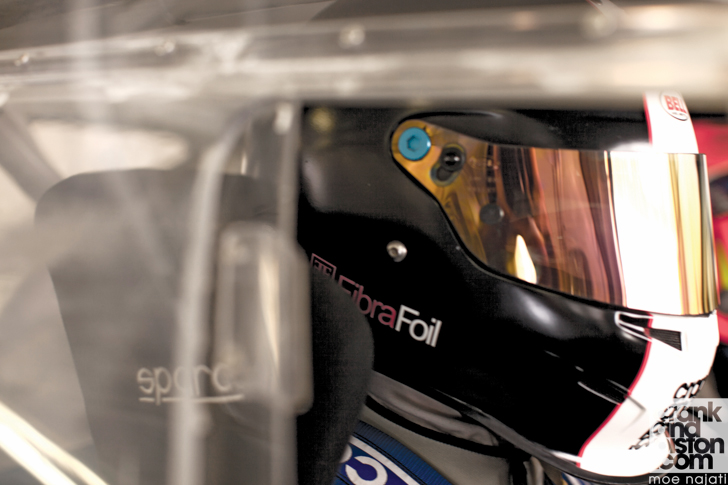 Helmet and HANS device on, I’m strapped tightly into the bucket seats, fire up the 488bhp engine, pull the right hand paddle for first gear and edge out of the garage into the pit lane. Neither the seat or steering wheel is adjustable, and I find the wheel slightly low. It’s also right at the level where I can’t see the shift lights on the digital display ahead of me, so I resolve to short shift, just to be on the safe side.

After a cruise to the end of the pit lane, I put my foot down from second gear. Acceleration is instant and savage, accompanied by a very, very loud wail from the exhausts. With no sound insulation to weigh the car down, the music echoes around the cabin. Even in a helmet and balaclava it’s seriously loud, and when I shift into third there’s an instant BANG and a kick in the back as the new cog is selected in just 60 milliseconds.

Down the hill into turn one I hit the massive black brake pedal with my left foot and the accrued speed vanishes. A turn of the small steering wheel reveals a much faster rack than the road car, and the feel is vastly improved – there’s no give, no dead spot and reaction from the front end is instant, darting the car into the turn. From the right hander I accelerate up the hill and grab fourth heading into a left-hand kink. After the braking prowess, the ability of the car to change direction is the second major element of the Trofeo that hits you. I talk about road cars remaining flat through corners, but this is seriously level – the big slick tyres grasp the tarmac at the front and the car whips from one direction to the other with no sign of roll. 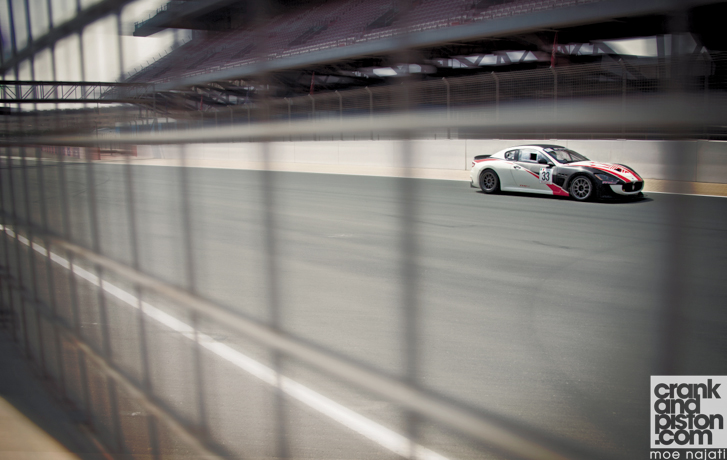 The weight makes itself known though – although at around 1400kg it’s light for a road car, that sort of bulk is tank-like for a racer and on this dusty surface the weight transfer results in a loose experience; the back end starts to step out. A flick of the steering corrects it, but it feels less intuitive than I expected. On a road car, on road tyres, movements are more telegraphed – there’s give, squeal, progressive slip, but on slicks in the Trofeo there’s grip and then no grip. My reactions feel slow and ponderous compared to the quick corrections Ramez was making, and my inputs both on the throttle and the steering far too heavy handed.

I fire past the pits at the end of the first lap and start again. And on lap two, it all goes wrong. Although I’m not trying to match the pace set by Ramez, I am attempting to reenact his lines, shift points etc, but overconfidence and a lack of experience get the better of me. I don’t realise it at the time, but I go far too quickly through the double-apex right-hand turn three, and the back steps out to the left. I move to correct it as we approach the left-hand kink that is turn four, the back end pendulums around the other way and I’m far too slow catching it. Before I realise what’s happening, I’m spinning at 145kph. I slam on the brakes to avoid hitting a wall, skid over the kerb amid a cloud of tyre smoke and thankfully end up facing the right way. As I get going again, there’s a thunk-thunk-thunk from the front end, suggesting a monster flatspot.

Cursing to myself, I tip-toe back to the pits and realise that in one fell swoop I’ve annihilated the tyres; the front right is worn down to the canvas. The big sticky Dunlops cost $2000 a set. I feel like a prize muppet and realise in retrospect that I was going far too quickly for an inexperienced race driver, in a car he’s never driven before, on a high-speed, technical and dusty track. Despite Barry’s warnings and although I kept velocities to sub-Ramez levels, I fell into the trap that plenty have fallen into before me and tried to do too much too quickly. 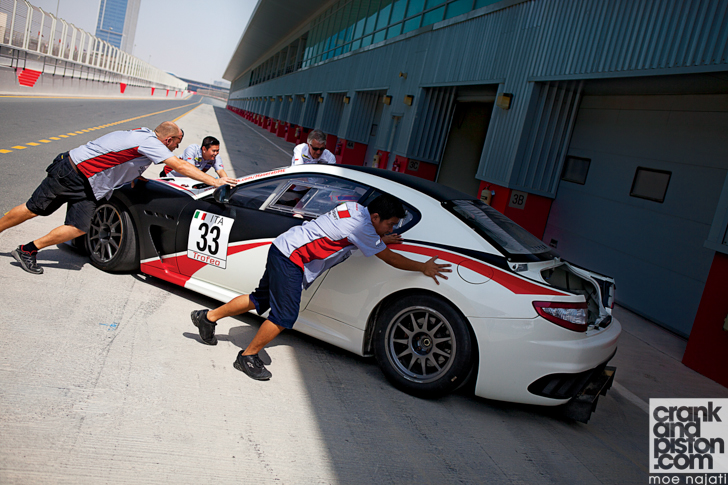 Remarkably, a replacement set of tyres is strapped on and I’m invited to go out again. But slower. Over the course of a few granny-like laps I gradually reconstruct my confidence and hindsight tells me that this is the best way to learn how to drive the Maserati; building it up almost from a standstill, lap by lap. For someone coming from road cars – as most of the gentleman drivers that will line up in the racing series at the end of this year will be – it’s a phenomenal machine, built solely to go as fast around the track as possible, and a visceral and aural sensation that no road cars can come close to matching.

But the Trofeo is a very different beast to any of the road-going Granturismos; much more different from the Stradale than the Stradale is from the 4.2. No matter how proficient you are in road cars, you’ll have a lot to learn if you don’t have race car experience, but the challenge of learning to drive all over again will be a major pleasure in the Trofeo programme, before a race even takes place. Just make sure you leave your ego in the pit garage, or it could take a considerable battering.