What does it take to make a Maserati GranTurismo not a gran turismo and turn it in to a track weapon?
[Not a valid template]

The brothers Maserati were building racers before the Maserati automotive brand was born. Alfieri Maserati even prepared and raced cars for Diatto until Diatto ceased producing race cars in 1926. This led the brothers to build their own Trident missile – the Tipo 26 – which cleaned up in class on its first outing on the Targa Florio. It would therefore be a fair assumption that, when it comes to building race cars, Maserati knows what it’s doing. 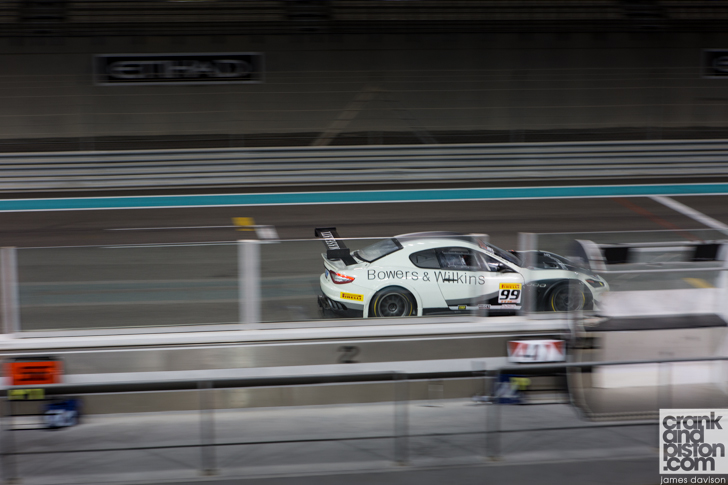 With the Trofeo World Series final round taking place in Abu Dhabi recently – on the Yas Marina Circuit – it was a good opportunity to corner Silvestro D’Amico, Racing & Sponsorship Coordinator at Maserati, and load him up with some questions regarding the current Trofeo Maserati race car. And just how similar/different is the competition car to the road going GranTurismo? Obviously, it lacks every conceivable luxury element required to make ‘long-distance, high-speed journeys in both comfort and style’ – which is the very definition of gran turismo – so what does it take to make a GranTurismo not a gran turismo and turn it in to a track weapon? 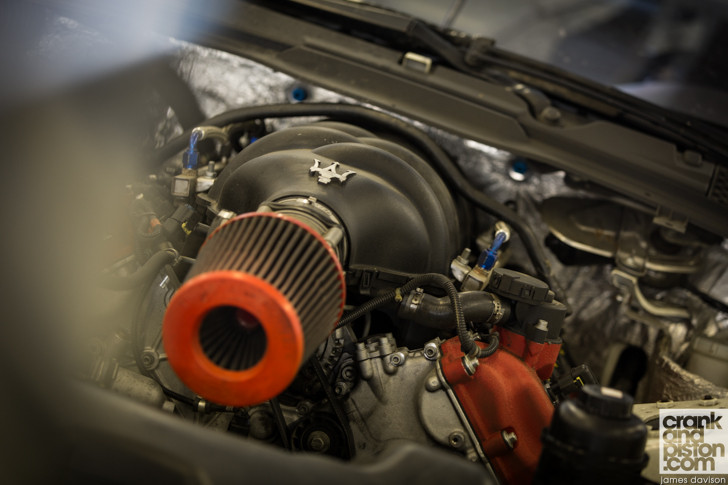 Like any petrol head, I jump straight in at the deep end with my questioning: what’s been done to the engine? I am initially shocked when Silvestro tells me it is stock. I have seen these cars on track and they don’t hang about so it is surprising to find out that – apart from a free flow exhaust, double cone racing filter and a little bit of ECU tampering – this is the same 4,691cc V8 lump that graces the road car. A few extra Italian ponies have been let loose and power output is now at 488hp – the GranTurismo Sport produces 454hp – but it is mainly down to weight shaving that produces performance gains. 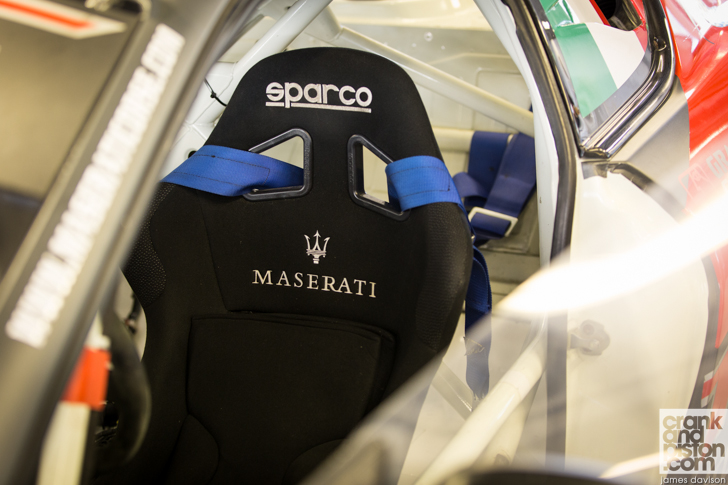 For everything that is extracted from a race car there are more things added. A stripped out interior and carbon fibre console and dashboard replacing the original items save weight. An FIA approved, welded integral rollcage and fire surpression system pile it all on again. The Maserati GranTurismo MC, however, has been on a secret diet. The only original metal body panels remaining on the car are the rear wings and roof. Doors, front wings, bonnet, boot and bumpers have been replaced with carbon fibre items. Even the windscreen, rear and side windows have been replaced with Lexan and the weight saving is substantial. Whereas the road going GranTurismo weighs in at 1,880kg, the racer’s fighting weight is less than 1400kg. 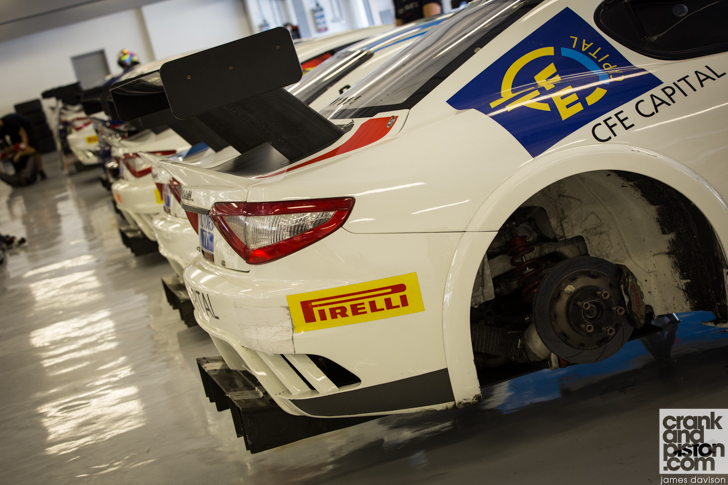 The most obvious visual difference is the complete aero package that is strapped on to the race car. Front splitter and canards and massive rear spoiler and diffuser help drive the downforce and, combined with the race spec – fixed setting with preload adjustment – shock absorbers, cornering can be tackled with a fair bit of pace. Arch extensions also conceal a bit of extra tyre girth as the wheels on the Trofeo Maserati race car measure 11”x18” for the fronts with 305/660/18 rubber and 13”x18” for the rears with 325/705/18. Extra grip with extra downforce is a pretty potent package on track. 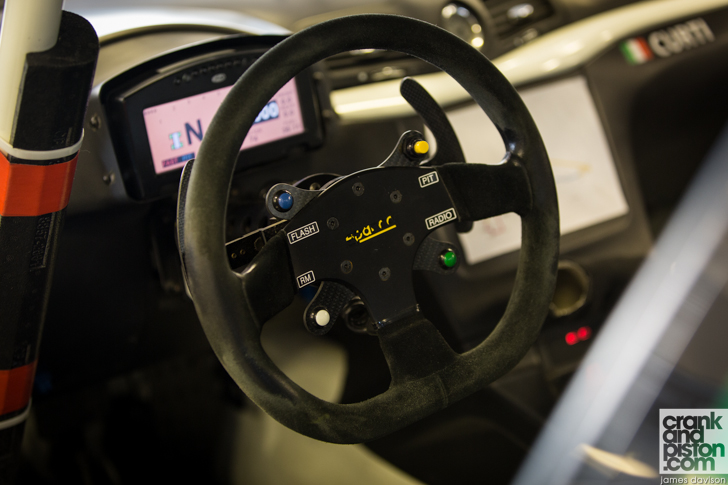 There is so much more going on with this car that I wouldn’t have picked up on if Silvestro wasn’t so passionate (Excellence Through Passion?) about it. A full AP Racing brake system – sans ABS – with 6 piston/380mm steel discs up front and 4 piston/326mm discs at the rear – can be adjusted for bias by the driver. The six-speed gearbox has electro-hydraulic activation with F1-type controls. The pedal box is another AP Racing item. There is a data acquisition system integrated in the dashboard. The fuel tank is a 110 liter carbon safety frame homologated by the FIA. The list goes on… 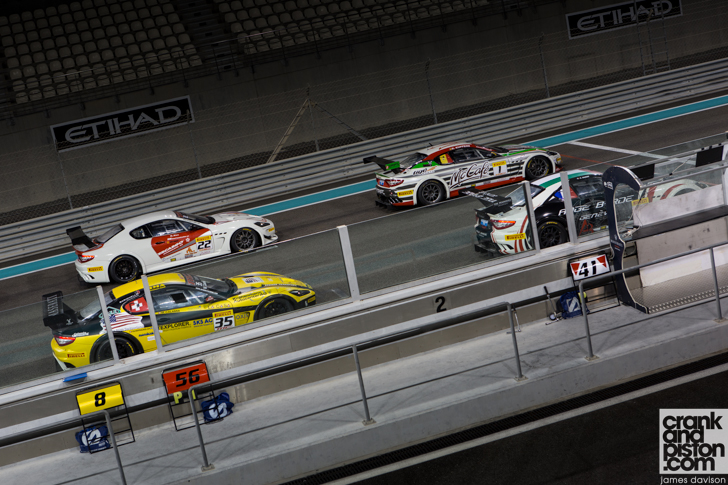 Like everything in life, what this all boils down to is money. Racing in the Trofeo Maserati World Series for a season doesn’t come cheap. And by not cheap, what I am actually saying is €120,000 + Tax and that is a substantial sum of money even in monopoly. What you get is the use of a GranTurismo MC for all races with spare parts, tyres, maintenence and fuel included. You also get full technical assistance and a dedicated mechanic, insurance and a whole lot of other stuff that starts to make you think that €120,000 + Tax is actually quite a good deal. Most importantly, you get to race a Maserati and take your place in the marque’s motorsport heritage. And, if it suffers any mechanical issues – or you bin it into a wall – they will provide you with another car for the next race. I would call that a bargain.

crankandpiston.com is not a registered charity but we are accepting donations to help James Davison compete in next year’s Trofeo Maserati World Series. 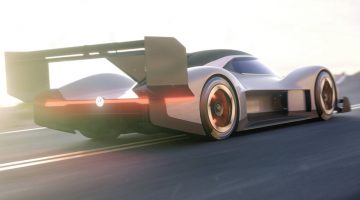