It has only taken Davison seven years to get a proper drive in a GranTurismo. But was the Maserati GranTurismo MC Stradale worth the wait?

It’s hard to believe that the Maserati GranTurismo has been with us now for seven years which, in automotive terms, is a more than respectable innings. And yet, with the exception of a few lukewarm laps around Yas Marina Circuit in a GranTurismo Sport safety car during the final round of the Trofeo Maserati series last year, I have spent exactly no other time driving one. This was something I needed to rectify even though I feared it might be a bit of a blunt Trident.

It is that age old battle of heart versus head as I admittedly fell a little for the GranTurismo when it was unveiled at the 2007 Geneva Motor Show. It was an exercise in pure Italian design via Pininfarina pen and, perhaps more importantly, arguably the first ‘beautiful’ Maserati since Orsi days. It joined the fifth generation Quattroporte in firmly establishing the marque in the 21st century and heralded in a new era of Maserati goodness. So yeah, inhabitants of the internet would now describe it as “getting me right in the feels” when I first clasped my peepers on it back in the day.

But within my pea-sized brain lives a modicum of logic that annoyingly makes itself heard. I’ve had the good fortune of driving the latest breed of Maserati in Quattroporte and Ghibli guise which both utilise the brand’s new lightweight architecture mated to modern Ferrari-built engines. The GranTurismo, on the other hand, is a seven year old car based on architecture from the fifth generation Quattroporte which means its underpinnings are well over a decade old. And just to really upset the balance of my already unstable applecart, that ‘pure Italian design via Pininfarina pen’ was produced by an American who has since buggered off from Pininfarina and now works for Saab or something. Is nothing sacred? 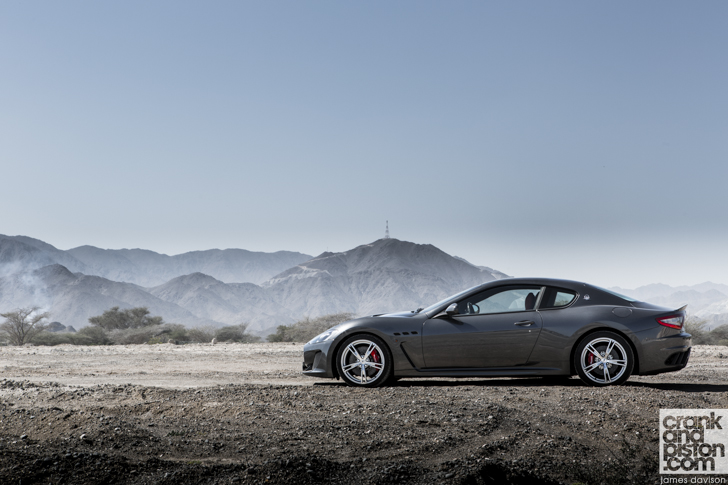 There is no denying, however, that the GranTurismo hasn’t dated a day in the looks department even after seven years in production. Park it up beside any modern exotic and the Maserati will still be the pretty sister of the pair. This particular GranTurismo does have a bit of an attitude about it though as it is the MC Stradale, the closest thing you can get to a road-legal Trofeo race car. But that’s OK. I like ‘em feisty and set out on a grand tour for some quality one-on-one time with a GranTurismo. Finally.

Pointing the MC Stradale’s vented and bare carbon fibre nose towards ‘them there hills’ begins with the drudgery of navigating out of Dubai. And also reveals early on a little of this Maserati’s personality. The MC Stradale comes with a ‘six-speed MC Race Shift’ transmission which is transaxle mounted for improved 48:52 weight distribution. But, it is an out dated, electro-actuated, robo-type automated manual ‘box which hesitates and jerks when in auto mode in slow moving traffic. I much prefer using the paddles to row through the gears myself and decide to knock it out of auto, bypass Sport mode and stick it straight into Race. Even though I am just tootling around Dubai.

Gear changes become much smoother but it is still all clunk & delay when you pull on the big carbon paddle even though Maserati states that it “changes in just 60ms – five times faster than a blink of an eye”. What Race mode does do, however, is unleash the full vocal rapture of the MC Stradale’s 4.7-litre V8 and, quite frankly, I love it when it talks dirty. With all valves permanently open the cackling V8 comes to life and lets everyone in a 5km radius know that there is a proper Maserati out on the prowl. And so it should. It’s a crossplane crankshaft variation of the F136, jointly developed by Ferrari and Maserati, and is arguably one of the most lively and characterful V8 engines about. Even the Ferrari Speciale rocks a flat-crank F136 in 4.5-litre form. Yes, is sweet engine bro (insert thumbs up symbol here). 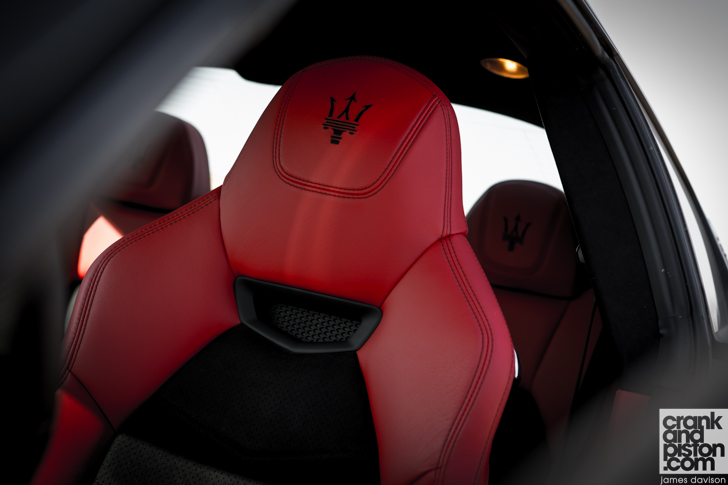 Hitting the monotonous highway necessitates knocking it back into Auto mode. At sustained, straight line and legal cruising speeds, that V8 aural ecstasy rapidly descends into something rather less enjoyable which Auto mode nulls by closing valves. It’s about an hour to the hills so I am forced to amuse myself with mundane journalistic activities. The ride is comfortably GT all the way although the seat did take me a while to find the perfect position. The interior, decked in carbon fibre and wrapped in Rosso Corallo leather, is really quite scrumdiddlyumptious. The antiquated infotainment system has been ripped from a Citroen and is best ignored. BOSE surround sound system is nice. Maserati analogue clock. Tick tock. Tick tock…

Off the highway and up into the hills at last, it is the first opportunity to really have a good stab with this Trident. We’re back into Race mode and that V8 is coming on strong and properly on song warning all the little goats to get off the road unless they want a Maserati in the face. The MC Stradale’s power just feels constantly there, with 384lb/ft of torque and 460hp pulling you through to 7,000rpm with naturally aspirated goodness before happy slapping that paddle into the next gear. And, it might be my imagination, but that old school robotised gearbox seems to have woken up in response to being thoroughly abused. 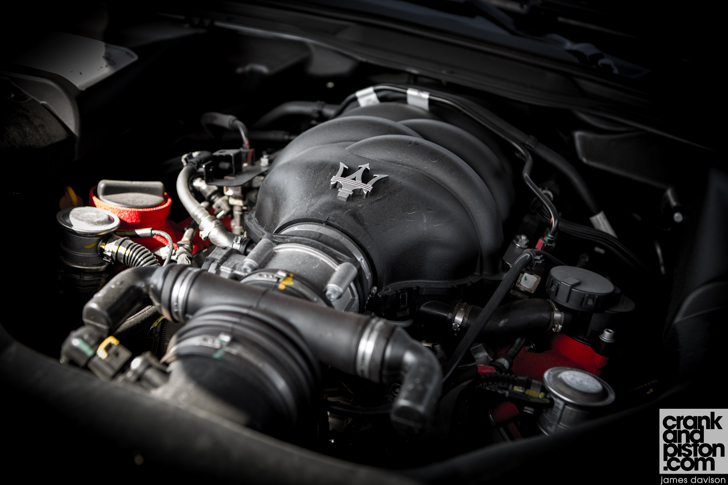 It is also far from unwieldy on the twisting tarmac. In Race mode the suspension becomes more taught and the MC Stradale already runs eight percent stiffer than a standard GranTurismo. It also sits a little lower than the standard model but, despite this, it is a beautifully judged passive setup that allows just enough weight transfer on tighter turns before the damping kicks in. Even when pushing a bit harder, oversteery moments are predictable and progressive, easily gathered up with gentle application of opo, avoiding unnecessarily becoming at one with the scenery. Perfect for being a hooligan on real world road surfaces but probably not hardcore enough for track use.

The steering does lack a little sharpness, that absence of instant responsiveness that grand tourers always suffer from due to the compromise in crafting a car for the dual purpose of speed and comfort. There’s no such compromise in the brakes though. The carbon fibre stoppers do a grand job at scrubbing excess speed off once they have been woken from their slumber. They were admittedly extremely bored during the highway cruise when I was analysing the interior but I can’t fault them for that. 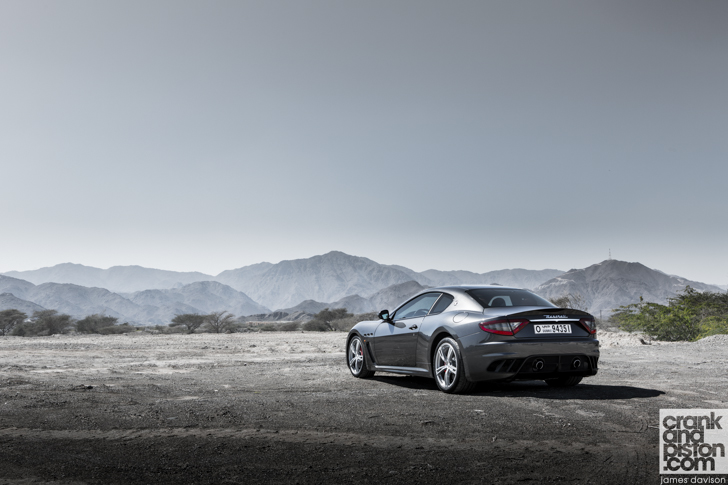 With the road nearing its end, I back off a little letting everything cool down. The MC Stradale has proven itself to have considerable, unrelenting pace with surprising handling ability for a grand tourer. A further few kilometres later, I park up to have a smoke and get some photographs but end up staring back at that beautiful American design which still gets me right in the feels. Combined with that V8, it is a potent automotive mix and, genuinely, I can forgive the GranTurismo its flaws. It has taken me seven years to finally get a drive in one and I might never get to drive one again. I will not be taking the short way back home in the MC Stradale. 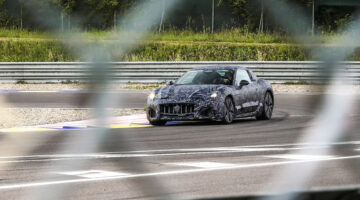