To celebrate a decade-worth of high-performance F models, Lexus has revealed the RC F 10th Anniversary.

To honour ten years of high-performance models, which have worn the F badge, Lexus has revealed the RC F 10th Anniversary edition. Priced at $92,120, order books for the coupe, set to be produced in limited numbers, will open on July 1 2018.

Lexus introduced the F designation in 2008 on the IS F, and the LFA, GS F and RC F have flown the high-performance sub brand’s flag since. As an homage to its back catalogue of F models, Lexus has unveiled this special-edition RC F. Disappointingly, though, it’s nothing more than an aesthetic exercise, with no mechanical upgrades to show over the standard car.

Marking out the coupe is the mercury grey, matt paint finish – seen on a Lexus for the first time. To complement the dark hue a collection of carbonfibre parts, courtesy of the carbon pack, including the bonnet, roof and active rear spoiler, adorn the limited-edition model.

Lower down, the lightweight material also forms the side skirts and rear diffuser, which match with the similarly coloured gloss-black 19-inch, forged multi-spoke alloys, behind which sit blue brake calipers bearing the F signature.

Inside, a blue and white colour scheme offers contrast to the exterior, with this combination of colours trimming many of the tactile surfaces such as the steering wheel and seats. Again, carbonfibre features, too, in the shape of trim inserts found in the doors and the dashboard. Furthermore, each model will be branded with a metal plaque, affixed to the driver’s door armrest, to recognise its special edition status.

The powertrain is carried over from the regular model, so power and torque remain at 457bhp and 384lb ft, which translates to a 0-100kph time of 4.5sec and a 270kph top speed. 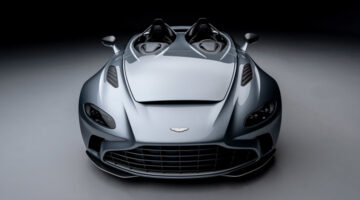