Lexus welcomes its latest entry level to the fold, but can it handle the competition. crankandpiston.com takes a drive to find out.

Lexus has been on a bit of a roll recently. As well as new generations of both the GS and IS saloons, the Japanese marque has added a third model to its ‘F’ performance range with the new RC F. It’s even taken the time to unveil (in concept form at least) the RC F GT3 model that will spearhead Lexus Racing’s global GT program in 2015.

It was therefore only a matter of time before the company’s Sport Utility line-up received a similar injection of oomph, and into this particular spotlight steps the all-new NX Turbo. Following in the footsteps of the now decade-old RX 300, the new NX represents the brand’s entry level SUV, which puts the newboy squarely in the headlights of the BMW X3, the Audi Q5 and even the Range Rover Evoque. To take on this stiff competition, focus on the NX has surrounded two areas, namely Design and Performance. For the latter, the NX Turbo is off to a good start.

Truth be told, I rather liked the radical NX concept Lexus unveiled last year: all sharp lines and bulky wheel arches, I half expected it would eventually turn into Megatron. The production model though has been softened to create a slightly less polarising look, one that is still very handsome albeit not quite as radical as it could have been. No qualms with the side profile though, nor the bulky rear wheel arches and beautifully sculpted taillights, both of which deserve an arts grant.

Lexus has been similarly bold on the inside, the centre console having been designed to mirror Lexus’ L-Finesse’ (Lexus’ design lingo, not ours) front spindle grille. There are just enough buttons on the dash and surrounding console area to border on ungainly – I count 46 before I even get to the door panels and multi-function steering wheel – but it’s a strong design statement, much like the outside. There’s even a Qi Charging Tray that feeds your iPhone battery wirelessly. Very striking, very clever. 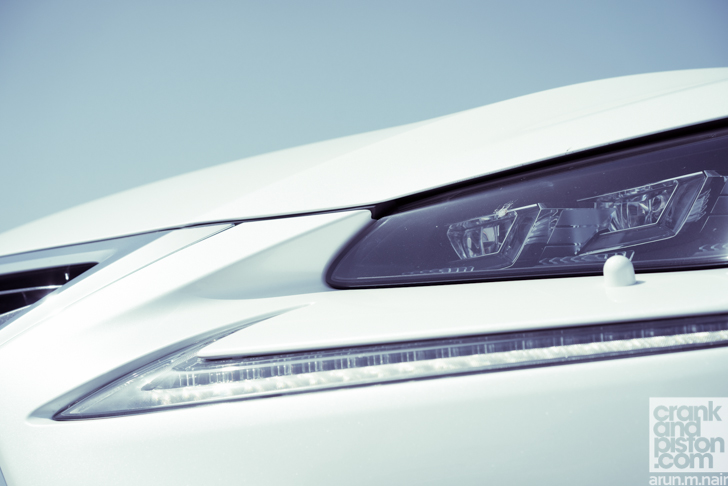 “But, ah,” I hear you scoff, “how exactly can Performance be a true factor with an SUV James?” and I’ll admit I’m similarly skeptical: the hidden vanity mirror in the front armrest doesn’t help the soccer mom image either.

There is potential salvation though for the NX 200t, which has the enviable position of housing Lexus’ first ever turbocharged petrol unit. Supported by twin scroll turbochargers, the 2-litre four cylinder is based on an all-new engine architecture designed for better fuel economy but which also optimises power delivery. So confident is Lexus in its new powerplant that it has no plans for a replacement – or even an accompanying engine – to join the range any time soon.

Which is a little disappointing. The 232bhp and 258lb ft of torque figures don’t make for overly exciting reading, and while acceleration in the new NX Turbo is brisk, I had expected more. Not just because this is Lexus’ first steps into turbo territory but because shifting that lardy kerb weight does require some more guts.

Gear changes through the six-speed automatic are though Lexus-typical smooth, and what particularly impresses is the handling, an area which – during the NX Turbo’s four years of development – has received input from Lexus’ racing division. New shock absorbers help iron out bumps in the tarmac, the adaptive variable suspension keeping up its end of the bargain to ensure the same thing. Cruise along and the NX Turbo really is incredibly comfortable, aided by the almost-figure-hugging-but-not-quite-going-overboard leather seats. If I have one complaint in this regard though, it would be the mounting of the seats themselves: despite being seated as low as I can, my driving position is still too high. This is becoming an unwelcome staple for Lexus, in my opinion. 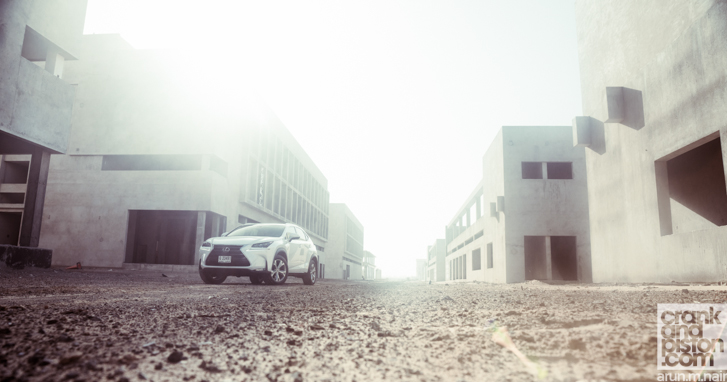 Clever weight distribution means the NX is not as top heavy as its 5.5ft height may suggest, and when you’ve put your brave trousers on, you really can hit the corners much faster than you’d expect possible in an SUV. Under cornering, the Performance that Lexus had emphasised starts to become clearer, and one does wonder how the NX Turbo could really manoeuvre with just a dash more horsepower under the bonnet.

Design-wise then, the NX Turbo is a triumph, and from a performance perspective, it’s an impressive package albeit with a couple of lingering question marks. Whether this combination is enough to topple the BMW X3 and Range Rover Evoque remains to be seen, but don’t be surprised to see Lexus – as it has been doing recently – making a statement. One that, hopefully, comes with a bit more horsepower.

Previous ArticleMobil 1. A History in Motorsport
Next Article Chris Harris on the Porsche Cayman GT4