Lexus CT200h. The Hybrid Warrior, or not?

I think any car can get a rave review from a tester if reviewed from the correct perspective, so I want to be clear up front what my test perspective is.  Consider the daily commuter that drives from Dubai to Abu Dhabi and back every working day of the week.  For those of you unfamiliar with this route it is roughly a 300km round trip on decent, straight highway.

Enter the Lexus CT200h.  Lexus offer two models of the CT200h, the Prestige priced at AED160,000 and the Premier at AED132,000.  I was asked to test the Prestige version.  The car is typically Lexus – well built, conservative looks and generous levels of trim and gadgetry.   Upon entering the car I was surprised at how roomy it felt inside – it hardly looks large from the exterior.  Keyless go meant a quick push of the start button to start the engine…..but nothing.  I tried again…..still nothing.  Then I realized that the car was running.  The green READY light on the dashboard indicated that car was ready to car, albeit on its electric motor.  So I engaged D and off I went, rather silently.

The car has three drive settings, ECO, Normal and Sport.  For the purpose of the test and to try and improve my ‘green’ credentials I chose ECO for the majority of the driving.  On occasion I selected Sport but I believe the term Sport is somewhat an over statement.  With the exception of the dashboard turning an ‘angry’ red from a ‘tranquil’ blue and the rev counter replacing the ECO counter there is truly very little difference.

On the road, the CT200h drove exceptionally well.  It was balanced, extremely comfortable and very quiet even with both the electric and petrol motors running.  This is one very clever car.  The switch between electric to petrol to both and back to electric is seamless.  Couple this with a plethora of interior gadgets and safety features and this becomes quite a compelling option for the commuter.  I found that I was constantly watching the dash to see if the I was charging the battery, using the battery, using the engine, remaining in ECO mode, etc.!  A little distracting but I’m sure the novelty wears off soon.

So based upon all of the above, does it work for the daily Dubai to Abu Dhabi commute?  I’m afraid not.  You have to give too much up for the return of decent fuel economy.  The car needs to be serviced every 5,000kms which means that twice a month the car will be off the road.  The servicing is extremely good value (AED300 to AED700) per service but it is still the inconvenience of the car being off the road twice a month that lets it down.  The car also lacks any real ‘guts’ so over taking is not always an option.  And finally, AED160,000 is still a sizeable price tag.  So yes this car is well built, as clever as Steven Hawkins but it just doesn’t work for the commute.  Whilst fuel prices remain comparably low and little incentive to drive ‘green’ then I don’t see the CT200h making a huge splash here.  In some markets like Europe and the North America, this car is perfect but sadly the fundamentals for its success just don’t exist in the Middle East. 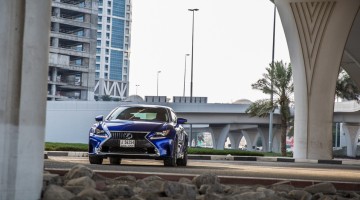