Timelapse showing the work of, and the process behind, the artistic images of Khyzyl Saleem.

Regular fans of crankandpiston.com’s facebook page may already be familiar with the work of Khyzyl Saleem, the Manchester-based artist in his early 20s whose work makes the Mad Max universe look like driving Miss Daisy. Choose a sport or supercar from the past two decades, and chances are he has spliced in modified fenders and bumpers, some slammed suspension, a crap-ton of carbon fibre, and a considerable dash of awesome sauce to create the ultimate dystopian masterpiece.

Inspired by Danny LuVisi and Arron Beck among others – and with the original intention of learning to paint – Khyzyl rather incredibly only hit Photoshop four years ago at a tender age of 17 hoping to create something not only individual, but also ‘distinctive’. Mission very much accomplished. 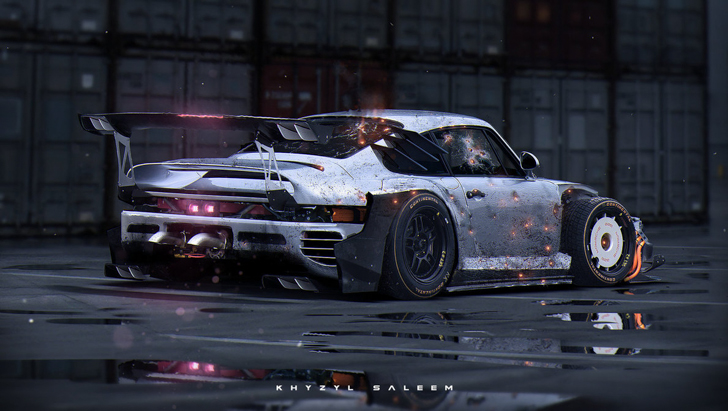 His works combine seemingly everything, from British roadster to JDM classics and Italian supercars, all with a typically ‘atmospheric’ backdrop. The eagle-eyed amongst you may already have noticed a Porsche 959, LaFerrari, the Honda NSX, a Ferrari 308, the BMW i8, a Lamborghini Hurácan and even the newly unveiled Mission-E from Porsche, plus the occasional F-150 Raptor. His latest series – Evade, a battle between old and new – includes homages to the Pagani Huayra, the Mercedes SLS AMG, a McLaren P1, and Bugatti’s new Vision Gran Turismo re-imagined as Darth Vader. Simple, really…

It’s a process that, as you can imagine, takes hours to complete, a process that starts with a generic found photo, the background of which is removed as is the windscreen, wheels, panelling and pretty much everything else that is redundant to the final look.

Any aspiring artists may find the below time-lapse insightful…