It’s not been a great month for Daniel or the Porsche Cayman S, which ended up face first in a concrete divider on the highway.

Oops. Unless you’re reading this in Braille, you will already have seen this month’s big news.

It started with insurance renewal, which is easy enough to do, but all I normally think is that it’s a good chunk of change that I could have wasted on some modifications instead. This time round though, it was money well spent. So, how did I get my new nose job?

The scene: dark night; two-lane highway. Dubai was having its one day of rain per year, which involves an annual supply of water being deposited on the ground in one shot. Semi-slicks still fitted to the Porsche, I was crawling along in fifth gear at around 80kph in the right lane with the windscreen wipers at full ‘flip-flap’ speed. Parts of the highway were flooded and while it didn’t bother the Land Cruisers and Patrols blowing past, it did bother me. With the rain harder than ever, there was a sudden increase in engine rpm and simultaneous tail waggle, which told me I’d lost traction. Immediately I was off the gas and relaxed my grip to see what the car wanted to do. 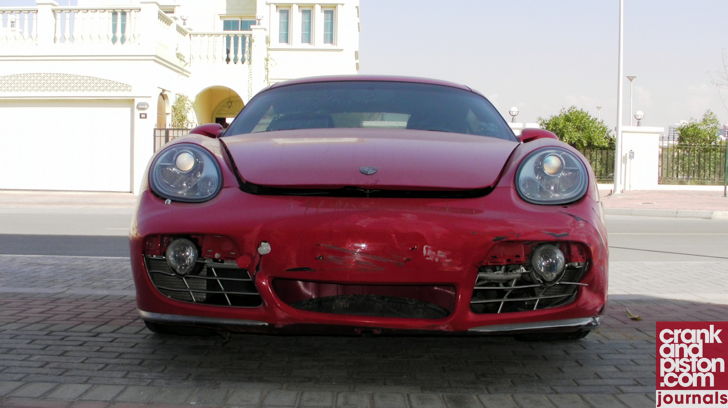 What it wanted to do was turn left at almost 90 degrees and pitch me head on towards the concrete divider. Braking would have made things worse so a split second later it was on with opposite right lock in a bid to sort things out. However, with only two lanes to play with and no traction, I was aquaplaning and just a passenger on this ride. At the last moment there was hope as the nose started to pull back round to the right, but it was too little and far too late. Moments later, after a face full of airbag, a bloody nose and car full of smoke, I had managed to park. Stepping out to survey the damage, the scene was better than expected. Coolant everywhere meant I wasn’t going to be driving very far, but other than that all of the damage looked mostly cosmetic and all on the front end, if you exclude the windshield and dashboard.

Further inspection is still required. With some structural damage to the front end I’ll have to wait and see what the insurance company decides to do. I’d always thought my first major crash would be trying to be a hero at the wheel at silly speeds. Never did I think Sunday driving speeds and a spot of rain would get me eventually.

Did I mention I was on semi-slicks and maybe there was ice on the road?