Fast but flawed Trackhawk is surprisingly likeable and packed with character 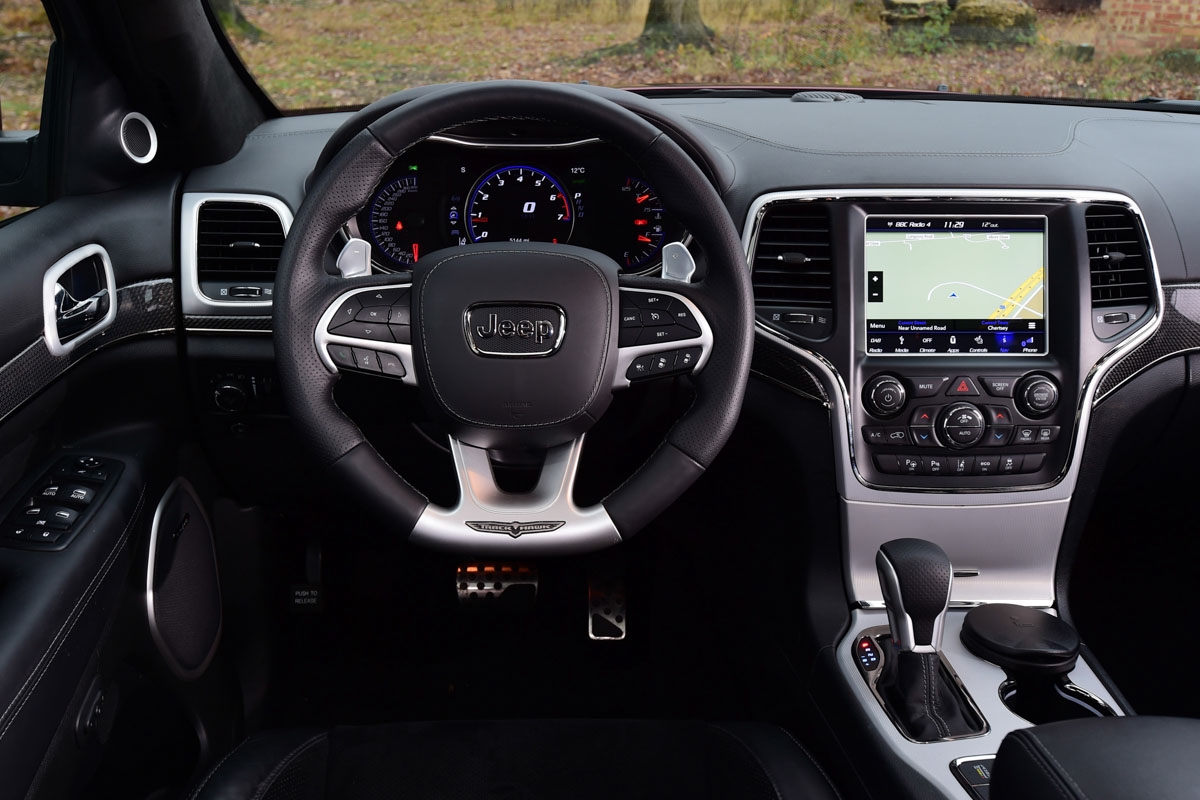 The Jeep Grand Cherokee Trackhawk joins the ever-increasing ranks of high-performance SUVs. Yet while it’s aimed ostensibly at models such as the Porsche Cayenne Turbo S, Mercedes-AMG G63 and even the Lamborghini Urus, the Jeep takes a slightly different, old school American muscle car approach to its task, which means plenty of bang for your buck. Of course, $113,300 isn’t a small amount for a car, but when you consider its 707bhp (yes, really), sub-four seconds 0-100kph time and 290kph top speed are bettered by only the $165,560 (before options) Urus and you begin to see what Jeep is trying to achieve.

Perhaps the most un-brash, un-American aspect of the Jeep is its styling, which is surprisingly subtle. Apart from the 19-inch alloys that hide bright yellow Brembo brake calipers (six-pot items at the front, four at the rear), low-key matt black quad tailpipes and a pair of vents in the bonnet, this could be a standard Cherokee. Well almost, because despite the minimal changes the Trackhawk has a nicely aggressive and hunkered stance.

Inside you’ll understand why the car is so heavy, because the cabin is groaning under the weight of all the standard kit. It still lags behind Europe’s best for quality, though. The leather covering the seats and dashboard is nicely done, but the plastics are fairly low grade, the switchgear has the look and feel of knocked-off Merc items and the TFT screens for the instruments and fairly clunky infotainment just lack the definition of the best. You can’t knock the standard kit, mind, with almost every luxury and gadget you can think of being fitted as standard.

Against a backdrop of rivals that pack cutting-edge driver aids such as four-wheel steering, active roll control and torque-vectoring differentials, the Trackhawk comes across as a little crude on paper. On the plus side, it’s based on the latest Grand Cherokee, which at least means you get a monocoque body (not a ladder-frame chassis in sight) and four-wheel independent suspension, including a multi-link rear axle. However, the focus on harnessing all that power means that the height-adjustable air-suspension has been ditched in favour of more conventional coil springs that work with Bilstein adaptive dampers.

Also upgraded is the Quadra-Trac four-wheel drive that now packs a limited-slip differential at the rear and has a manually variable torque split. By using the rotary driver mode controller on the centre console you can choose a front-to-rear bias of 50/50 (Snow), 40/60 (Auto) or 30/70 (Sport and Track, with the latter disabling the stability control). Each of these settings also gradually ramps up the weight and response of the steering, throttle, damping and transmission. And with a typically arcade game flourish you can view a huge variety of real time performance data on the infotainment screen, from turbocharger pressure right through to the various G-forces.

Lurking underneath the Jeep’s vented bonnet is the same supercharged 6.2-litre V8 Hemi that’s also used in the Dodge Challenger SRT Hellcat. Packing a fairly outrageous 707bhp and transmission-destroying 644lb ft, it helps the Trackhawk achieve some ludicrous performance figures. For instance, the 0-100kph sprint is all over in 3.5sec, while the top speed is 290kph, which is fairly brain-bending when you consider the barn door aerodynamics.

Yet arguably it’s the way the Jeep delivers its considerable energy that never fails to bring a smile to your face. As you’d expect, the V8 fires with a typically crackly flourish, before settling down to a burble-chug idle. Getting off the line requires smoothness with the throttle, so eager is the Trackhawk to get under way. Once rolling the acceleration isn’t explosive as such, instead the Cherokee simply gathers speed at an alarming rate, the gargantuan torque and its plateau-like delivery playing as much of a role as the heady horsepower. It’s one of those cars that catches you out with its speed, arriving at naughty velocities in a relentless, linear surge. OK, that’s not strictly true, because you’d have to be severely hard of hearing not to hear the Hemi when it’s in full voice. Low revs elicit the traditional burble and gurgle, but as the tachometer needle swings past 3000rpm you get the bellow and thunderous crackle that sounds like the full angry Thor. It’s hilarious, ridiculous, anti-social and completely brilliant all in one go.

So it’s a shame the eight-speed Torqueflite auto isn’t up to the same standards. Take it easy and it slurs ratios smoothly enough, despite an occasional reluctance to shift up on a part throttle, but go harder and it gets itself in a right muddle. It’s at its worst when in Sport or Race, with full-bore upshifts being delivered with the sort of interminable pause that used to punctuate the changes of automated, single-clutch manual gearboxes – although giving the throttle a little lift between changes helps smooth things out a touch. Downshifts are better, but you don’t always get the gear you want as you pile into a corner, the gearbox refusing to respond to the flimsy paddle despite you knowing the engine and road speed should allow it.

In many respects it’s exactly as you’d expect a 707bhp, 2429kg SUV to drive, which, in some circumstances, is borderline hopeless. Yet despite its flaws, this is a genuinely likeable and entertaining machine. It doesn’t much like bumps, particularly in its racier driver modes, but on smoother, flowing roads it can cover ground at an astounding rate. Perhaps unsurprisingly, the slow in and fast out approach works best, but with this much traction and performance, your ‘out’ is very, very quick indeed. The Cherokee can be encouraged into doing silly things, too. So, disable the traction control, get the nose turned in and then boot the throttle and, with more torque going to the rear axle, the Trackhawk will take an amusingly oversteery stance out of a corner.

It’s not particularly graceful (the four-wheel drive wants to shuffle torque forward to neutralise the slide, plus you’re acutely aware of the car’s mass and size), but there’s a real guilty pleasure in punting something akin to a small bungalow on wheels with such childish glee. It’s also hobbled by slow, vague and mute steering – you always seem to need more lock than you think to get the car turned in, even though there’s decent front end bite from the vast 295-section tyres. Still, you soon learn to trust it, and before long you’re harrying hot hatches and scaring the living daylights out of sports cars. Like I said, it’s childish fun.

Bumpier surfaces are the Jeep’s undoing. The ride is firm but fair in Auto (refinement is decent, too, with the only aural intrusion being the distant background rumble of that marvellous engine), but ramp things up and the Trackhawk starts to get a bit more frenetic, the Cherokee following the topography rather than flowing with it, before giving up completely and pogoing over the really rough stuff, the overly stiff set-up a by-product of trying to keep something so big and tall cornering relatively flat. There’s also a disconcerting desire from the front wheels to follow ruts and cambers when braking hard, causing the car to squirm this way and that, which is particularly nerve-wracking on narrow roads. Speaking of the brakes, get over the rather soft and squidgy initial pedal action and you’ll find surprisingly effective and progressive stoppers.

At a glance the Jeep’s $113,300 price tag looks fairly hefty, but factor in the supercar-chasing performance and kit list as long as both your arms and legs, and it almost starts to look like good value – there’s certainly nothing else that provides the same blend of ballistic pace, good ol’ boy soundtrack, practicality and fun but flawed handling. It’ll even cope off-road, as the satnav that directed us along a wet and slippery clay farm track proved.

In terms of straight-line pace only the Lamborghini Urus comes close. It’s more expensive at $165,560 and has ‘just’ 641bhp, but a slightly lower kerb weight means it’s just a tenth of a second slower to 100kph. Where the Lambo scores is in its freakish ability to miraculously shed the kilos when attacking corners, giving it the agility and poise of something a third smaller. It’s not for shrinking violets, mind.

Closest in spirit to the Trackhawk is the $180,425 Mercedes-AMG G63. With similarly bluff styling and a more-power-than-the-chassis-can-strictly-handle kind of character, the steroidal Geländewagen is a car that makes up for its lack of on-road ability with charm – although it’s a million times better than its anachronistic predecessor.

Ford Focus review – everyday hero back to its best 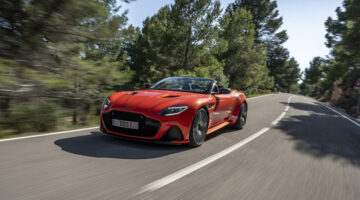