crankandpiston.com heads to Navarra, Spain, to test the brand new Jaguar XE. But can the newboy really better the BMW 3 Series?

Appallingly flagrant I’ll admit, but this was the extent of my enthusiasm ahead of this particular launch. For one, this was only my second Jaguar event in four years, and I was keen to make the most of it to whomever would listen (“cheers for the pizza, oh, and, did I mention…?”). For another, the car in question – the brand new mid-sized XE – is right up there with the F-TYPE as one of the most important models to arrive on Jaguar’s line-up in recent decades.

Indeed, though the XFs and XJs of this world have been battling for luxury sports and limousine spoils respectively, you have to go back 14 years to find the last time Jaguar entered the mid-sized saloon arena. And although media reception was largely positive, sales figures did not quite meet expectations and within eight years the plug had been pulled. Fast-forward to 2011 and Jaguar confirmed that the X-Type replacing XE – now rid of its Ford Mondeo underpinnings – would compete directly with the Audi A4, the Mercedes C-Class, and, most formidably, the BMW 3 Series. Benchmarks rarely come tougher to beat than that, but Jaguar is confident it has the basics covered. 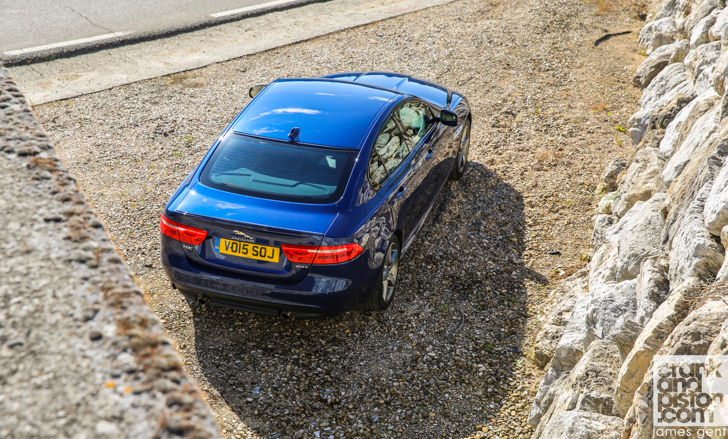 So how much of the XE is new?

Well under the bonnet we find a new range of Ingenium engines, an all-aluminium engine family developed from scratch that offers greater performance output with low friction to produce the ‘most fuel-efficient Jaguar ever’ (and as you’ll see, that’s not the only ‘most…ever’ label affixed to Jag’s newboy). The XE marks the company’s first use of its electric power steering, a more energy efficient alternative to the departing hydraulic system. Dig yet deeper into this technological treasure trove and you’ll find double wishbones at the front (lifted incidentally from the F-TYPE), which elbows traditional MacPherson struts for improved stiffness. Built on Jaguar’s lightweight, flexible aluminium intensive monocoque means the XE is the company’s most rigid saloon yet, as well as the most aerodynamic. It sits lower to the asphalt for better cornering ability, and yet incorporates integral link rear suspension and a larger wheelbase than the 3 Series for improved cabin comfort. Take a look at the front grille and you’ll find Jag’s newly emblem, used only once before on, yep, the F-TYPE. On the XE, Jaguar has left very few mid-sized stones unturned. 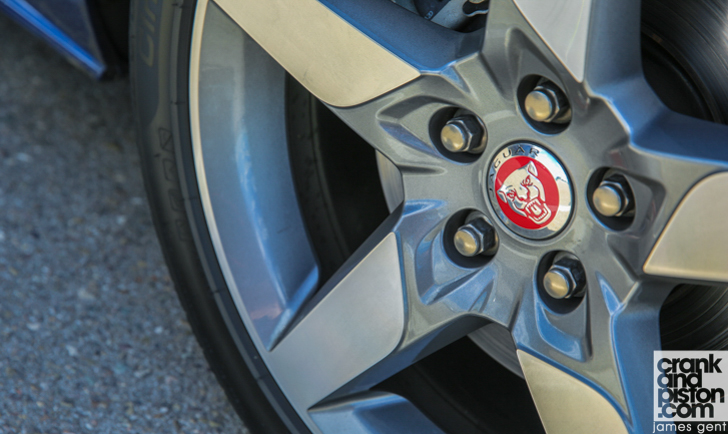 What kind of power are we talking about?

Atop the XE’s beautiful flowing bodywork, the R-Sport package brings a subtle rear spoiler, two-tone 18in alloys and select chrome detailing. You can make up your own minds but I think it’s a stunning design, even if from some angles – particularly the rear – hints of ‘BMW’ and ‘Audi’ design language have crept in. Still, they say the purest form of flattery is imitation…

Though not quite packing the same 335bhp punch as the XE S we take for a few laps at the Circuito de Navarra later on (which we’ll come back to), the XE R-Sport nevertheless houses a gutsy 178bhp 2-litre supercharged four-cylinder diesel that produces 317lb ft of torque and a 7.8sec 0-100kph time. Rather than arriving with a shove though, power from those four cylinders is progressive, changes through Jaguar’s excellent eight-speed ZF automatic both swift and smooth to keep acceleration in the R-Sport linear rather than aggressive. Quick though, certainly quick. Keep the right hoof planted and the digital readout on the head-up display will be into triple digits almost effortlessly. 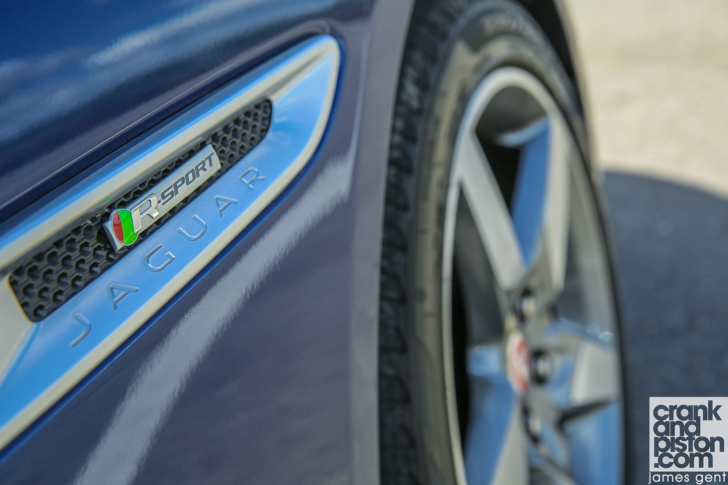 How does the XE R-Sport handle?

Jaguar’s EPAS electronic power steering for instance in Normal mode is a touch on the light side (you’ll want the tangibly more direct feel from Dynamic if you’re really looking to let loose) but even here on these tight switchbacks, response on turn in is very impressive. There’s plenty of grip – coupled with Torque Vectoring by braking system – to undercut the threat of understeer, a low centre of gravity to keep the XE wonderfully agile through even the sharper turns, and little in the way of bodyroll to affect the balance, the F-TYPE double wishbones performing admirably. And again, like the acceleration, there’s no fuss or sense of drama from the driver’s seat. The cabin is Jaguar’s now traditional blend of contemporary (read ‘trendy’) design, including bags of room and solid-build quality. Fans and owners of the XF will certainly not be disappointed, nor for that matter will those with bad backs, since ride comfort – coupled with the excellent leather sport seats – is stunning. In the R-Sport, it all feels so…easy.

Too easy. The R-Sport is very capable certainly, but there’s little aural drama, such is the effectiveness of the cabin insulation (a problem we found with the XFR-S) and the smoothness of the ride. Any sensation of speed that may come through is being muted…

Which brings us to Circuito de Navarra, and the XE S. Benching the 2-litre four-cylinder in favour of the new Ingenium 3-litre supercharged V6 means an extra 157bhp, 332lb ft-worth of torque and a 0-100kph time down to 5.1 seconds. Throw in extended side sills, a more accentuated rear spoiler, red callipers, 19in wheels and a couple of ‘S’ badges, and we have an all-new level of aggression.

Which bodes rather well for one of Europe’s most technical circuits, wouldn’t you say? 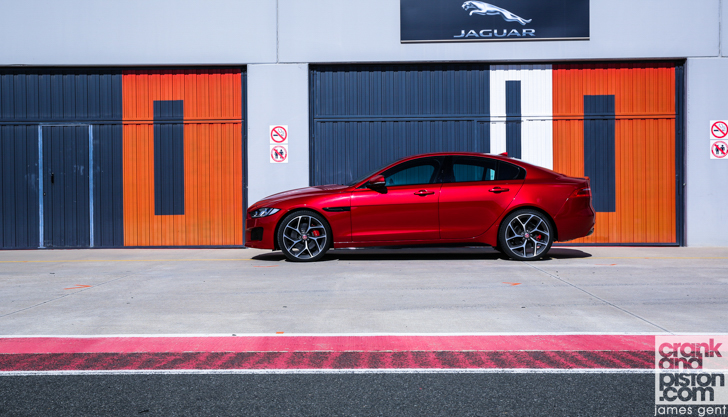 Go on then, how does the XE S handle the track?

Commitment into the high speed turn one is crucial for a good lap time, as is a good line into turn two, which – if done properly should allow me to brake hard into turn three and get the nose pointed for the next straight. Even at track speeds, the front end of the S is beautifully responsive, balance through the turns still mightily impressive. Indeed, for the first few sighter laps the drive mode is in Normal, and I’m amazed just how capable the XE proves. Ditto the brakes, travel in the pedal long and feedback from those ventilated discs incredibly alert. It’s only my ham-fisted timing that results in a marker cone being mown down and the XE temporarily heading into turn three sideways.

Make no mistake though, lively the rear end of the XE may be, but it’s superbly manageable, the rears jinking out of line as I throw out the anchors. At work is Jaguar’s All Surface Progress Control, providing four-wheel drive levels of grip at the front but enough give to allow the rear wheels free reign. Unleashed, the XE S is surprisingly lairy for a mid-sized saloon, but is unlikely to throw you into the barriers. 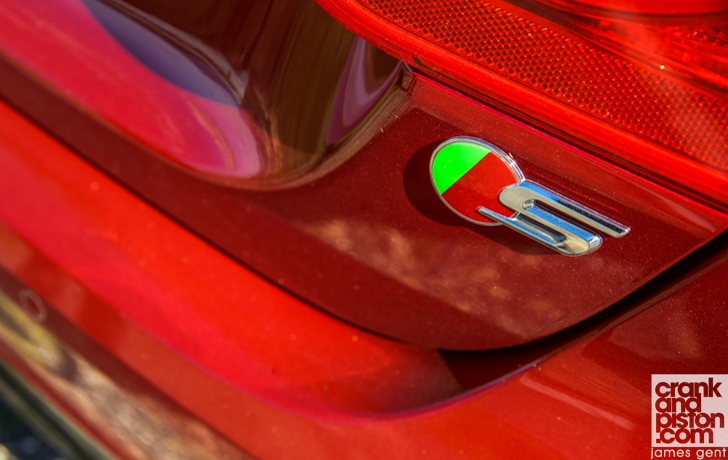 So the XE S is THAT good?

Oh yeah. And finally, finally, on the main straight, there comes what I’d been missing in the R-Sport. A little more dynamic, the S also produces a more intoxicating soundtrack that reverberates around the cabin. And it’s glorious, a deep basy rumble emanating from the new set of lungs under the bonnet it’s difficult not to fall in love with. From the effortlessly smooth and agile R-Sport, the more tenacious S is a completely different animal.

A day on the roads and a few hours at the track, and I’m completely sold. Yes the looks of the XE may divide a few people and Dynamic mode on the road in the S might be a little jarring, but as a complete package, the XE handles superbly, offers amazing balance through the corners, and offers scintillating yet refined grunt from under the bonnet. Throw a few more quid Jaguar’s way for the S and that V6 soundtrack would be our advice, but you’re unlikely to feel short-changed either way.