Infiniti VP sees a gap in the market for race cars for non-professional drivers.

Could Infiniti start making racing cars? The Japanese carmaker has associated itself very closely with top-level motorsport thanks to its title sponsorship of the hugely successful Red Bull Racing Formula 1 team, but has so far stopped short of taking after its parent company Nissan and making a fully-fledged dive into racing. Infiniti is on a major global charm offensive as it seeks to position itself as a premium performance manufacturer with cutting edge technology, and Red Bull Racing has been an ideal partner thus far.

However, Infiniti vice president Fintan Knight told crankandpiston that he admired customer motorsport programs of the type run by Porsche, and could see the potential for a similar venture by Infiniti catering to buyers that wanted a taste of racing action on weekends.

“I really like Porsche’s approach to motorsport,” Knight said, adding that the customer-focused model seems to him much more beneficial than a factory racing team. “Our job is to emotionalise and create an experience for customers. And so our focus is on the road car first, and on the customer that buys a road car. Part of emotionalising cars is getting off the politically correct horse and actually showing our customers how much fun it is to drive cars. There’s certainly a lot of potential in creating products for customers to have fun with.

“A sport like DTM is great for the driver but how does a customer get involved in it? In Formula 1 there’s an aspiration, a hero, an example. It helps build a community. But once you’ve done that you need to give customers experiences in road cars and beyond that I really see potential in customer racing.”

Despite caveat that there were no plans ready for publicity, Knight said the concept fitted in well with the image that Infiniti has been trying to cultivate in the last year or so. Earlier this year, Infiniti unveiled a promotional G37 Coupe track car (top) – a stripped out, track-prepared version of its sportiest model to date. Check out the video of it at the bottom of the page. Could that herald something further?

“Our brand is about seductive, high-tech performance,” Knight (above) says. “The thing that connects us with our clients is that they want to be everyday heroes. Maybe they’re doctors, lawyers, technology graduates – they’re gentlemen drivers. That’s where the brand and the customer meet. We know how to inspire these people by giving them a fun thing to do and like-minded people to connect with. I’ve been involved with several of these programs in my career [Knight previously worked with Audi and Lamborghini]. You really do unlock a passion for the brand and value for the client, because they enjoy being there with other similar people.” 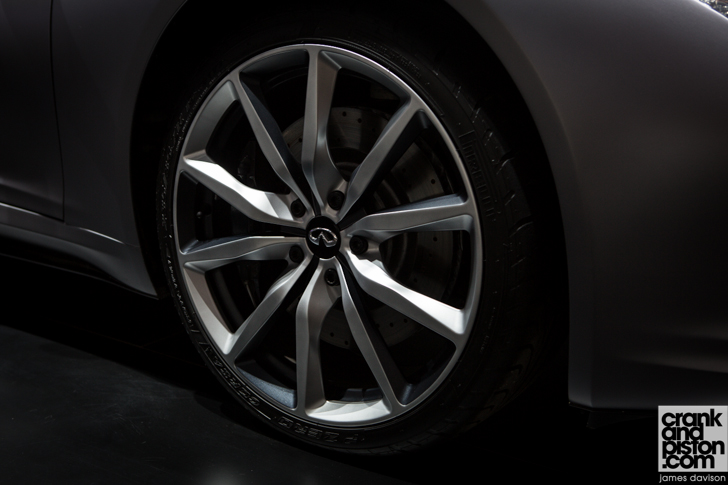 If an Infiniti racing car were to become a reality, Knight said it should be accessible, rather than a full-on, terrifying race car designed for the professional racer.

“I’ve driven the [BMW] M3 CSL for example, which is a beautifully raw experience but at the same time a very difficult car for a normal person to drive on a race track and have fun with. You need a high level of expertise and there’s a fear factor there too that isn’t helpful. We want to help customers fulfil their dreams, and if we can come up with a product to do that then there’ll be a mark up for it. Certainly it’s something that’s been occupying my mind.”

Don’t be surprised if something more formal becomes reality in the near future, especially if Red Bull‘s success in Formula 1 continues in 2014. For Infiniti, the team’s fourth consecutive world championship has been superb publicity.

“I would like to explore the boundaries, but we haven’t made any concrete plans or made any concrete decisions. We’re definitely talking about that kind of stuff,” he confirmed. “It’s our job to find the next idea and to lead.”