crankandpiston.com – and long-time contributor Tim Brown – head for a nostalgic afternoon of motorsport at Brands Hatch in the UK, courtesy of the HSCC Superprix.

For the second time in as many months, I find myself at Brands Hatch in the midst of a high profile historic race meeting. This wasn’t a petrol-fume induced flashback though. Rather it was ‘the other’ classic festival on the calendar of the English circuit, the HSCC Superprix. Whereas the Masters Festival, held in May, is run by ‘Masters Historic Racing’, this weekend it was the turn of the ‘Historic Sports Car Club’ to showcase its headline event.

On the face of it, the HSCC Superprix may look like many other top-level classic events, with an entry-list into the hundreds, spanning touring cars to single seaters. At the Superprix though both ends of that spectrum were rather special, the former consisting of 90s British Touring Car Classic saloons and the latter a 36 strong field of F5000, Formula 2 and Formula Atlantic cars. 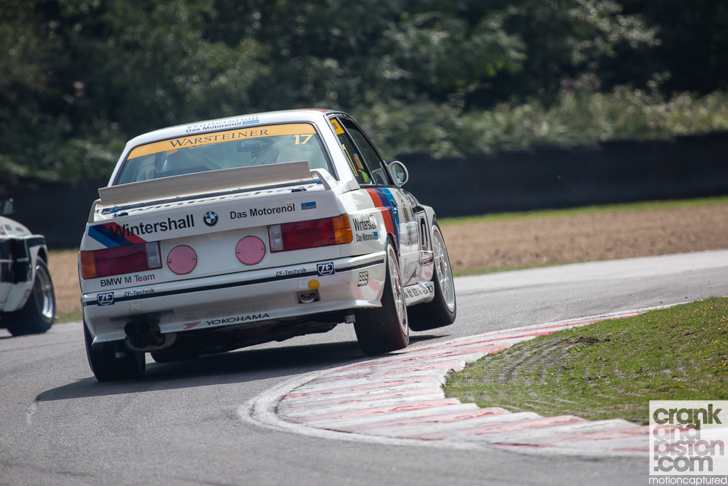 Let’s start with the BTCC racers. While many might think a car from the 90s isn’t ‘classic’ or ‘historic’ (in fact the youngest entrant was a Honda Accord from the year 2000), I beg to differ. The 90s were one of the bonafide golden ages of British touring cars, attracting drivers and manufacturers from around the world (culminating in ten different marques represented in the 1994 and 1996 seasons), all working with the ‘win on Sunday, sell on Monday‘ ethos in mind. It also happens to be the era when I was an impressionable young teenager just growing into a fully-fledged motorsport nerd, so it was great to see icons from my boyhood memories for the first time since they were the brand new. They weren’t door-banging with quite the ferocity they used to (it’s a wonder there are any surviving examples at all!) but the Super Touring Car Championship is still hotly contested. 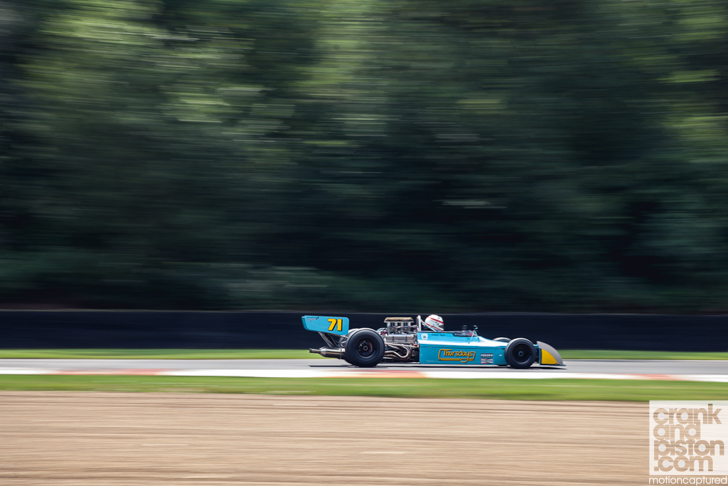 Onto the single seaters. Of the fourteen different HSCC Series’ racing over the weekend, eight were of the open-wheeled variety, including Formula 3, Formula Ford and Formula Junior. The headline race was the ‘Derek Bell Trophy’, for Formula 5000, F2 (in which Bell raced) and Formula Atlantic cars that battled during the 1970s. The noise that the 5-litre F5000 V8’s make is quite a change from the wailing banshee of highly tuned top-formula engines, but no less ear-splitting (be sure to check our Sid’s thoughts on the subject HERE). The volume of these snarling ‘stock-block’s was matched by equally loud colour schemes, my personal favourite being the Chevron B28 of Simon Taylor in appropriately groovy turquoise and yellow ‘Thursdays’ livery. 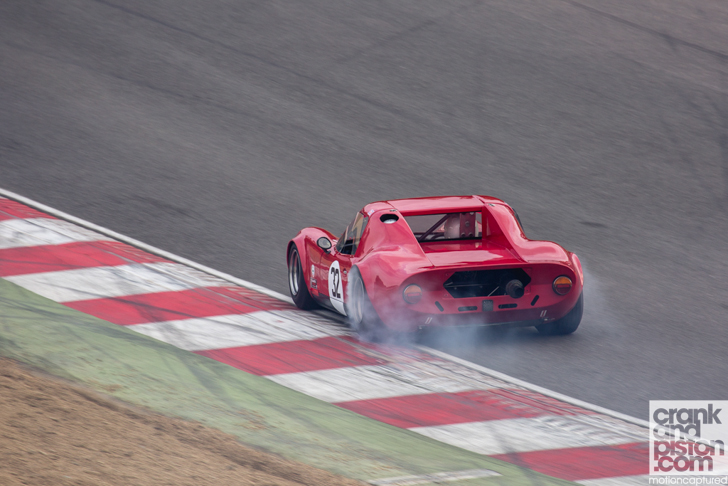 The 70s vibe didn’t end there though, as seen to by the ‘Martini Trophy’ for 2-litre sports prototypes and the ’70s Road Sports Championship’. Don’t be fooled by the diminutive size of the ‘Martini Trophy’ racers, these ‘Group 6’ cars are quick, and were built for competing in the European Sports Car Championship but also for legendary races like the Targa Florio and Nürburgring 1000km, and of course the BOAC 1000km of Brands Hatch. The 70s Road Sports field included some tasty entries, the most conspicuous being a BMW 3.0 CSL, sporting a livery clearly inspired by the first BMW ‘Art Car’ (painted by Alexander Calder). Other interesting cars on the grid were a Lancia Monte Carlo, a Lotus Europa and a Jensen Healey, none of which are a common sight in historic racing.

On top of all the seventies action, the ‘usual suspects’ from the preceding decade (think E-Types, Cortinas, Elans and Mustangs) were competing in the Guards Trophy and Historic Touring Car races as well, expanding the range of machinery on track (which is really what makes classic motorsport so much fun). However, it was the refreshing foray into the 70s and 90s that elevated this weekend from a potential feeling of deja vu to a memorable event in its own right.

Previous ArticleThe sounds of motorsport. It really IS necessary
Next Article ‘Crook’, from the director of Ultimate Racetrack