GMC has confirmed that its new-for-2015 Yukon SUV will headline its stand at the upcoming Dubai International Motor Show.

As well as a bold new look, the new Yukon comes equipped with updated technology, improved accoustics and the capacity to haul up to nine passengers, plus cargo. GMC has also claimed the EcoTec unit under the bonnet will ‘deliver the segment’s best V8 fuel economy’. The 5.3-litre unit delivers 350hp and 375lb ft, while the 6.2-litre unit throws out 420hp and 460lb ft of torque. Both are mated to a six-speed automatic gearbox.

GMC will also be showcasing the new 2014 GMC Sierra Light Duty pick-up truck, a Double Cab version of which crankandpiston drove on its regional launch in Hatta. As well as a new EcoTec3 engine line-up, GMC is calling the new Sierra ‘the most powerful, most advanced and most refined pickup in the brand’s 111-year history’. Also expected to make an appearance are the high-end Denali trim versions of both the Terrain SUV and Arcadia crossovers.

This news follows the announcement from sister company Cadillac, which plans to unveil its 2015MY Escalade, an all-new CTS and the new XTS Vsport. 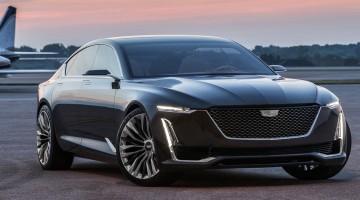