This, the latest Mustang GT500, was developed by Ford’s SVT division. The same skunkworks crew that has given the world the mighty Ford GT and the F-150 Raptor.

Cars with character stand the test of time. Think Porsche 911; for the past 50 years, Porsche engineers have been trying to figure out how to make an inherently incorrect design work perfectly. The same stands true of the Ford Mustang. For the past 50 years, Ford has been ploughing along with a live rear axle. Fine when you have 200bhp coming from the motor, not so much when contending with the high side of 600hp. Or so you’d think.

Like most of the latest generation SVT products coming from Ford, the GT500 is dominated by the powerhouse of an engine up front. Lift the bonnet and you’re faced with a 5.8-litre, supercharged aluminium-block V8 with 662bhp and 631 lb ft of twist. The hilarious fact of the day pertains to the mighty Eaton blower sitting comfortably in the V8 valley. Displacing 2.3 litres, the charger spins faster than the last GT500’s unit, pushes out 14psi at maximum boost and rather shockingly needs more horsepower to actually start giving oomph than is possessed by the current spec Ford Fiesta. These are big figures we’re dealing with. 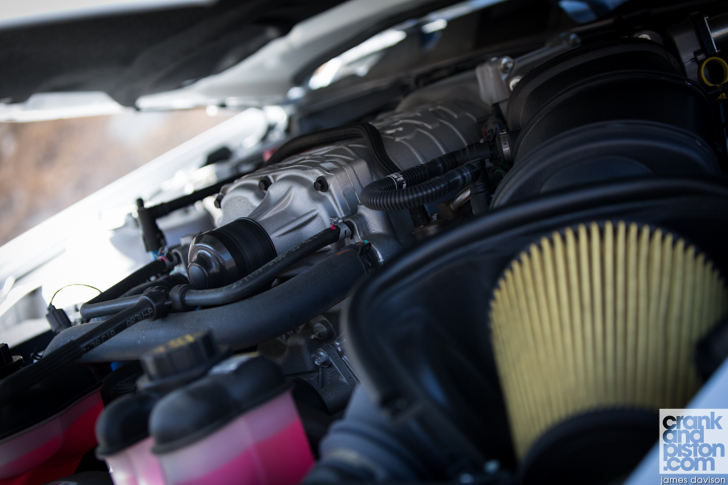 It’s quite clear, digging through Ford’s PR notes, that the Shelby team started with the engine and then worked backwards. In theory, that gives the perfect platform for a mighty new vision of a muscle car.

Look at the car head on and you can’t help but notice its gaping front air intake. No grilles, no slats, no nothing; just an open mouth ready to gulp in all the air it needs like a whale shark inhaling plankton. I’m hoping there are no low-flying birds to be sucked in as we chart a course for the mountains. The premise is simple. Grab the keys, pack a picnic and hit the road to unearth the GT500’s true capabilities. With 600-plus ponies on offer, cheap fuel and empty Friday morning roads, it should be fun by the bucket-load.

Rolling out of main Dubai residential zones, I get the firm impression that the Mustang has reserves. Lots of them. The gearing is incredibly long and when paired to the mountainous torque levels, the car is more than capable of burbling along on tickover. 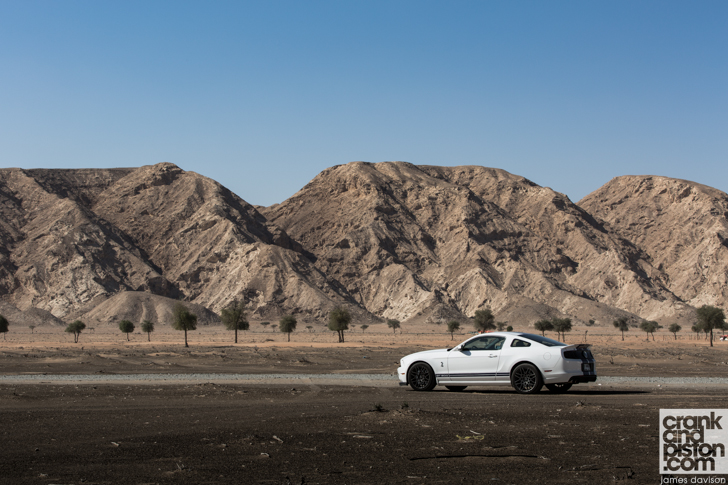 With fuel on board (of which we’ll need a lot), a course is charted, taking in highways, sweepers and some little tricky sections thrown in for good measure. It might be a muscle car, but the GT500 is not strictly a dragster. Looking at the spec sheet, the engineering team at SVT have clearly worked hard on the platform to provide the owner something really special. What is initially odd though is it just doesn’t feel fast. Well, it doesn’t feel 600-plus horsepower fast, anyway. It’s certainly not a slow car, but it doesn’t feel as quick as it actually is, amassing deceptive, countryside bashing speed with a beautiful mix of supercharged thrust and universe-crossing gait. It only takes a couple of flat chat acceleration runs (the rpm-adjustable electronic launch control function is addictive), to realise what is going on.

What was initially unimpressive becomes bizarrely addictive and utterly hilarious. Hold on tight, get the shifts right, stretch it out to the red line and as you relax, wipe the sweat from your brow and check the mirrors, you realise you’ve crossed an Emirate. I would never have believed this Mustang is more than capable of 320kph, yet it is. With ease. The Tremec 6060 six-speed and its gearing are the reason. Imagine what the car would be like with close ratios. Jamal Hameedi, one of the lead men at SVT, has been quoted as saying the car could easily have spun its wheels in third at 120kph, but they reigned in the madness to keep it manageable. I can firmly believe it. This Mustang wants to wag its tail at every opportunity and the last place I want that is under load with the afterburners lit. 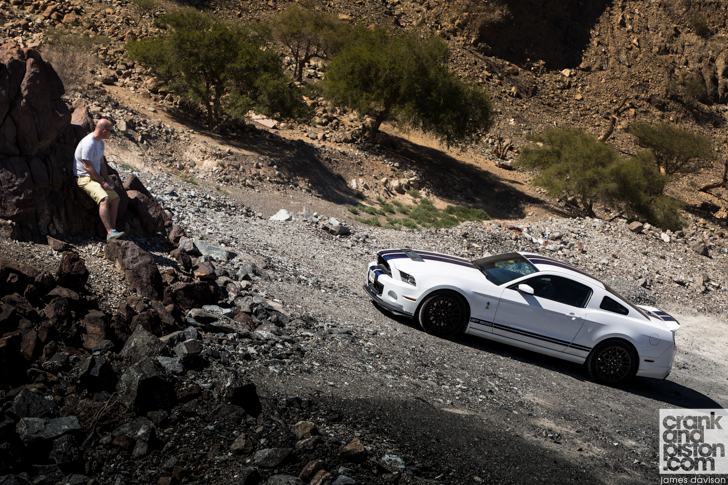 Leaving the highway charting as it crosses the UAE, photographer James and I stumble across a ribbon of beautifully fresh tarmac. What better place to see what the GT500 is capable of when the road gets twisty? Without writing War and Peace about it, corners are a bit of a waiting game; scrub speed, slow in, tickle the throttle, don’t rush things, get the car straight, apply throttle, pause the rotation of the earth and blast towards the next corner. That ability to pick up its skirt and thump its way across the landscape is addictive. With James positioning himself here, there and everywhere, my job was simply to keep it off the mountainous scenery. Which isn’t as easy as you’d expect, yet intoxicating and addictive. This GT500 is a proper machine.

Odd as this might seem though, I did find myself thinking less power would be more fun. There is a time and a place for 600-plus ponies and a Mustang on the backroads of the UAE is not that place. Thankfully the Brembo brakes were up to the task, offering a responsive and fade free pedal. The electrically-assisted power steering gives more than decent enough feel and feedback and there is grip up to a point. Get on the gas too early and the hilariously loose traction control will not save you until the back has whipped around to the front. It’s dynamic and quite well balanced, but you never forget the massive engine and blower combination waiting for you up front, begging you to straighten the wheel, point at the horizon and let it consume vast amounts of air. 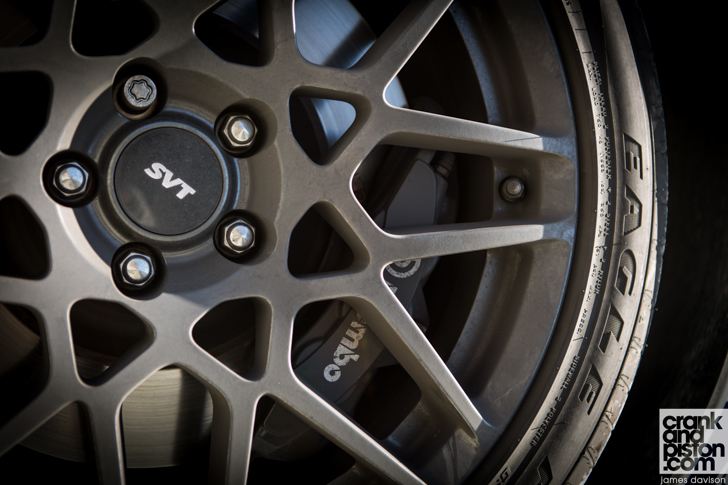 Do I have any real gripes with the last-of-its-kind GT500? Yes, sort of. The interior material quality does suck a touch, although the primary touch points like the steering wheel and pool ball gearknob distract your attention from the other scratchy materials, it did bug me every time I got in the car or had to interact with the door panels. Do I understand it? Yes. You can’t have your cake and eat it all the time. I’d far rather have Brembo brakes and 600 horses powering through the rear wheels than soft leather door cards, but you get my point.

By the time you read this, the new generation 2014 Mustang will be out in the public domain, representing a new look, a new approach and the end of the line for the live rear axle. It’s a sad day for a man like me. There is something endearing about a car that has been fine-tuned to within an inch of its life and made good. That character, the flaws, the good, the bad, all make the Mustang what it is. Will the revised approach rip that soul from the car? We look forward to finding out.