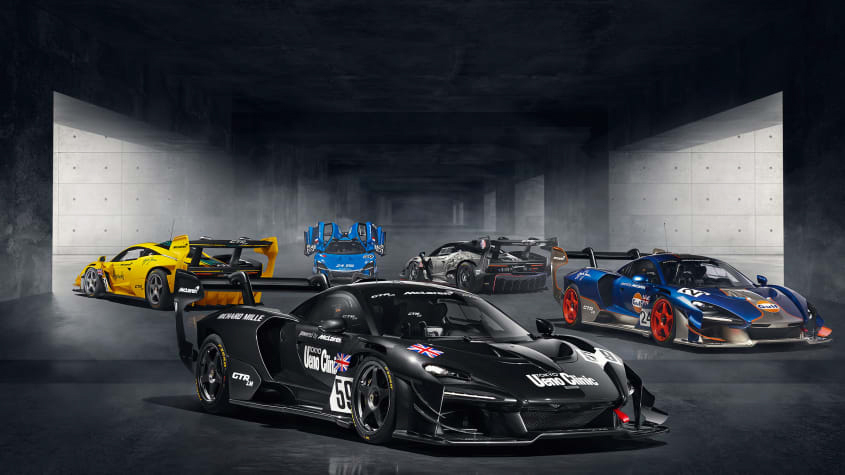 The 1995 Le Mans 24hr concluded with a result now enshrined in motorsport history. The McLaren F1, a road car masterpiece from Formula 1-designer Gordon Murray would don some light racing upgrades to not just win the Le Mans 24h, but dominate it – finishing in four of the top five places. There were in fact five F1 GTRs in that race, the last placing in 13th, each of which have provided inspiration to a set of five matching Senna GTR LMs commissioned by five lucky owners 25 years after that momentous race.

Each of the examples is based on one of those racers and features a bespoke hand-painted livery by McLaren Special Operations that took a staggering 800 man hours to complete. Each of the logos, sponsorship decals and colourations have all been painstakingly recreated on the Senna GTR LM’s complex bodywork, the only piece of vinyl on each of them is a recreated period scrutineering sticker.

Among those liveries is the famous ‘Harrods car’, car number 51 in the race, which was driven by Andy Wallace, Derek Bell and Justin Bell to third place after a transmission issue forced Wallace to nurse the car home in the last two hours of racing. The livery itself featured the name of London’s famous Harrods department store on the yellow and green livery.

The winning ‘Ueno Clinic’ car, driven by Yannick Dalmas, Masanori Sekiya and JJ Lehto was recreated with the car’s specific owner also commissioning a set of bespoke driving lights inspired by those fitted to the F1/01R.

Each of the units also features the five-spoke LM-style wheel design from OZ Racing and bespoke twin-pipe high-mounted exhaust outlets. The brake calipers and suspension wishbones are anodised in a dusty gold finish inspired by those seen on the original 1995 Le Mans racers.

The Senna GTR LMs themselves are otherwise as per the rest of the build run, taking the standard Senna GTR’s racing-inspired package and turning the wick up even further by boosting the M840TQ-specification 4-litre twin-turbo V8 to 833bhp. The extra power comes courtesy of new valve spring retainers made from a metal matrix composite that have a 65 percent weight reduction over the standard units, higher-grade valve springs and ported cylinder heads. The alterations also increase the rev limit to nearly 9000rpm, up from the standard Senna’s soft 8250rpm limiter.

These new powertrain elements are just the tip of a technical iceberg comparable in scale to the Greenland ice shelf, with other numerical highlights being the 1188kg dry weight figure and a 1000kg downforce rating at 250kph, generated without increasing drag by the clever active aero.

Given the nature of these most extreme McLarens, their historical significance and the huge human effort to bring the liveries to life, to discuss something like cost would be missing the point. We can just enjoy the fact that they exist at all, and perhaps consider that a standard Senna GTR will cost over a million pounds before all that bespoke paintwork…