The green flag has flown at Yas Marina for the start of Ferrari Racing Days 2013 in Abu Dhabi. And clearly crankandpiston has found a good place to get the ball rolling. In garage 27, there lies not just one but three FXX and eleven 599XX Ferraris: 14 examples of possibly the most aggressive Ferraris ever to roll off the production line. 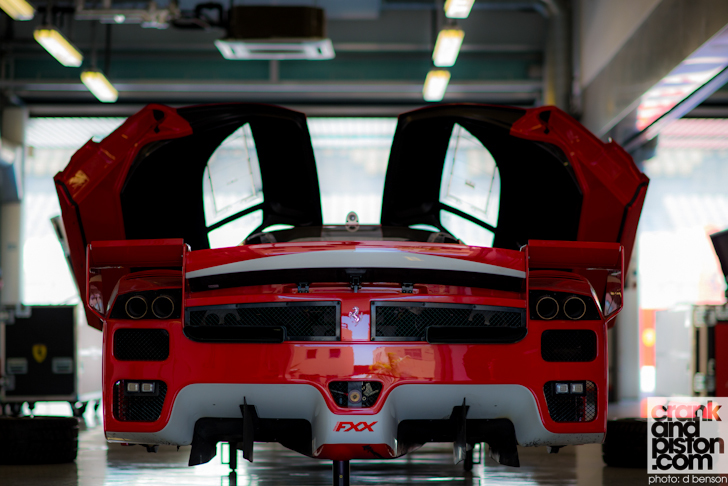 I say that because the hardware on offer is pretty immense. The FXX for example has as its base the Enzo, the 660hp, 350+kph 6.0-litre V12-powered bruiser that was hardly a startled kitten to begin with. Now though, donned in the racing regalia with which it stunned the automotive scene upon its debut (along with the XX programme) in 2006, the extreme Enzo has received tweaks to the independent pushrod suspension, race slicks and more aggressively tuned gear ratios. 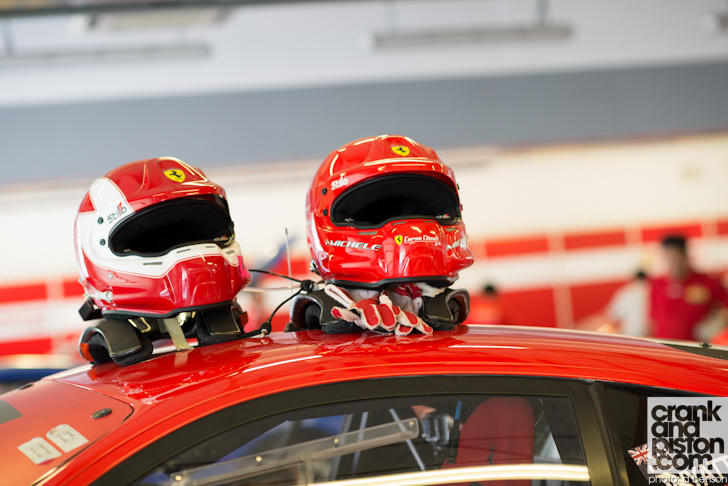 Thanks to a new 6.3-litre race-specced V12 punching out a teeth chattering 800hp, the FXX is – rather bizarrely – 10kph an hour slower at full pelt, but makes up for that with demonic grip in the corners thanks to a new carbon fibre chassis and revised fuel injection: through some of the tighter high speed corners, of which Yas Marina has quite a few, the FXX can produce up to 2-3G. I’m starting to understand the rather shell-shocked expression of some of the gentlemen standing around in FXX racesuits. 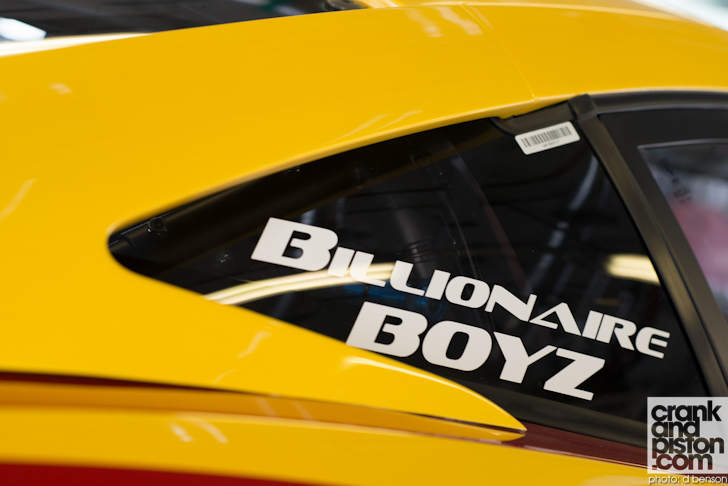 Whilst prowling about the garage, we meet Michele Cecchini, technical relations manager of the XX Programme. Were he to go deep into the technical know-how of the FXX, chances are my eyes would begin to water. Michele agrees with a nod of his head and a mild chuckle that perfecting the most extreme version of a supercar Maranello had already deemed as good as it could get proved tricky to say the least. One element out of whack with another leads to precious tenths of a second per lap being lost in the mix, and thus a painstaking and arduous balancing act began before the FXX was finally ready to hit the track. 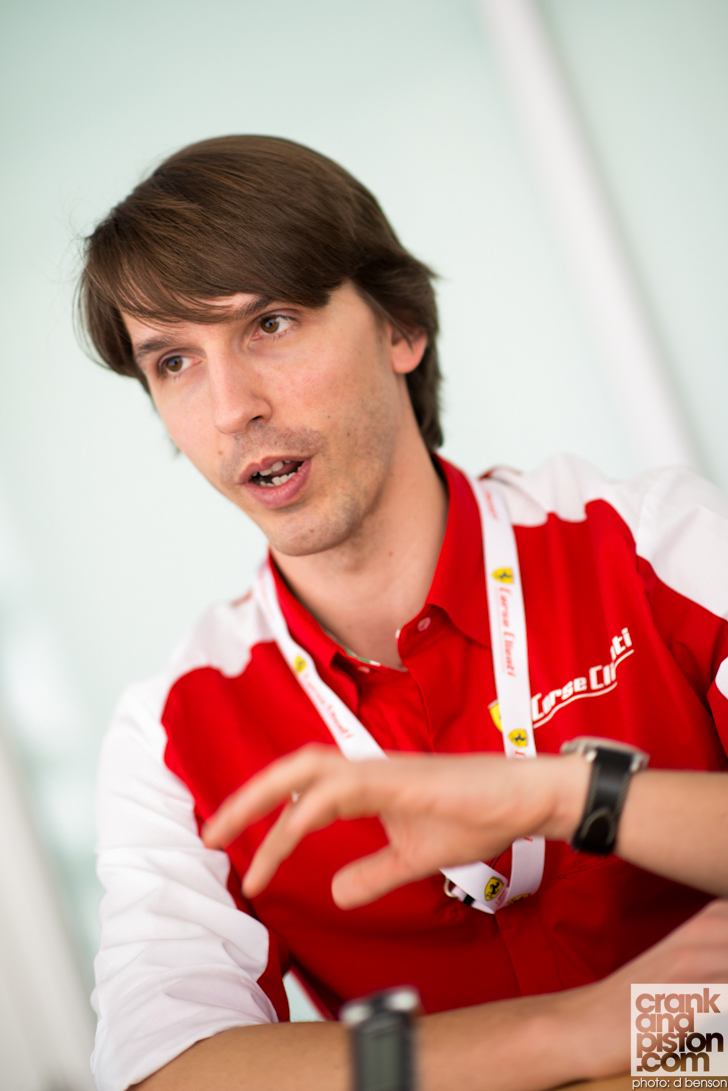 Even then, the FXX was not ready for its grand unveil. The team’s GT and Formula One technical teams, although vital in terms of expertise garnered, ultimately offered only some of the know-how required when developing the FXX: the extreme Enzo was, after all, unparalleled by anything that had come from Maranello, and driver input was to prove critical. Enter seven-time Formula One World Champion Michael Schumacher, who would undertake a great deal of the development work on the FXX during what would be his twilight years with the team. 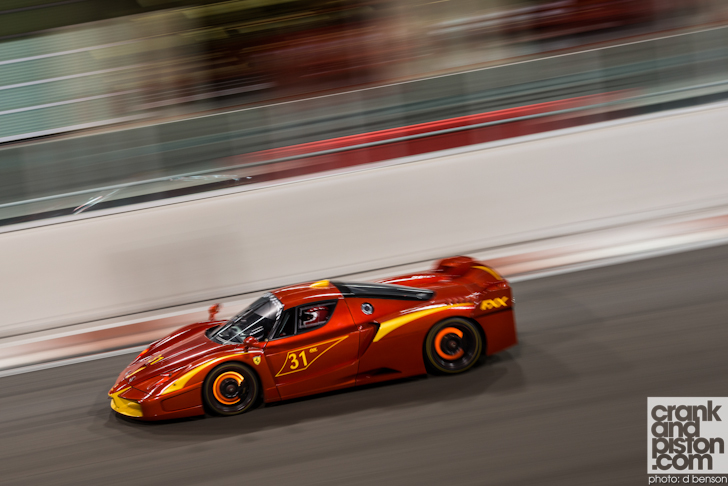 Official Ferrari test driver Marc Gene, who’s slipped across for a few quick words in-between his various driver tuition roles this weekend, agrees that the FXX is unlike any Ferrari he’s ever driven, but that the rush is just as intense.

“To me, it’s one of my favourite Ferraris”, Marc explains. “The looks are just so aggressive, and the engine. [Pauses, smiling broadly] the V12. The sound, the power delivery and the experience of the V12, it really is unique. 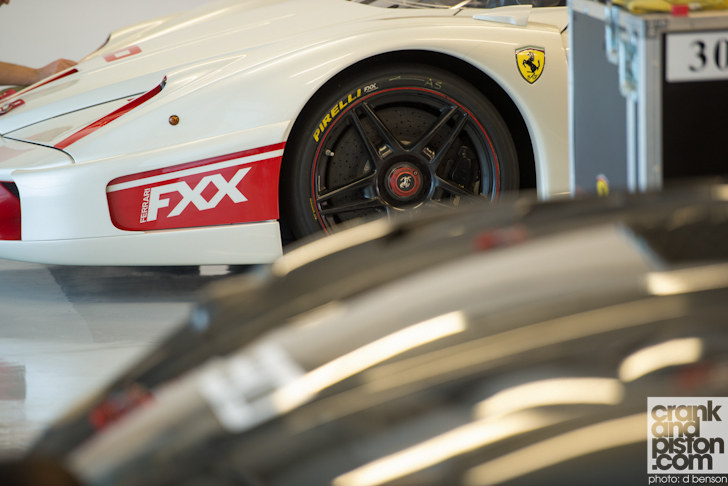 “It’s still a heavy car, compared to what I’m used to: an F1 car weighs around 600kg, and the FXX weighs around 1300kg. But I still get that same buzz behind the wheel. You do feel like you’re driving something very special, and there’s always a big smile on my face when I drive the FXX. I mean the laptimes are over half a minute slower than the F1, but this is still a very aggressive, very fast, very delicate machine. You need to really push it to get the most, the true experience.” 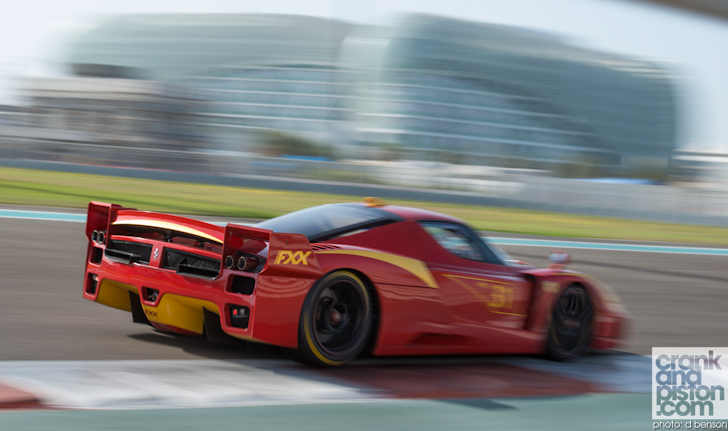 It’s not hard to believe then that the XX Programme, now well established in its seventh year of development, caused something of a stir when it first appeared on the scene in 2006. The prospect of effectively buying a rocket for the track was enough to get well-off petrolheads clammering. What did cause a few quizzical looks though was that customers, for an unsurprisingly hilarious amount of lire, could buy one of the most extreme scarlet models ever produced, but not be allowed to store it in their own garage.

Certainly the FXX – once sold – belonged to the customer, and a phone call (with a reasonable amount of notice) to book a slot on the next available Corse Clienti event got said clients bed, breakfast, a weekend of track driving and a fleet of Ferrari’s finest to walk them through telemetry and laptime data with their very own FXX. The car itself though, when not in use, would remain at Maranello. 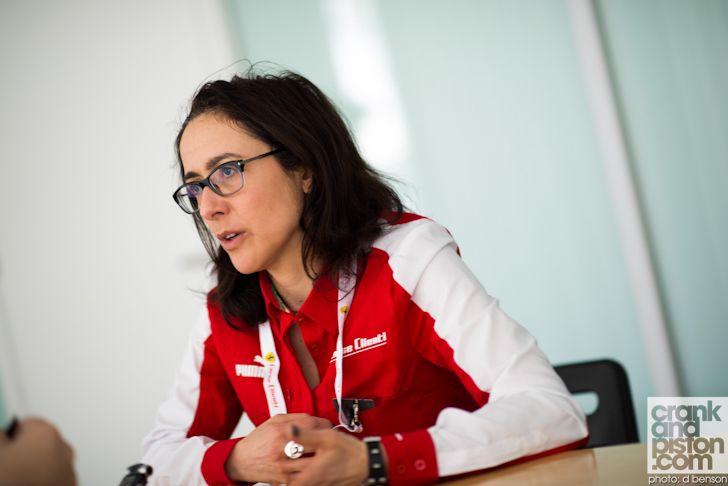 An intriguing proposition, but one which Corse Clienti client manager  Alessandra Todeschini has grown to understand the logic behind. For the Ferrari Racing Days weekend alone, she explains, Ferrari has ushered in over 150 crates of equipment, 60 dedicated mechanics and even more administrative personnel, as well as the six Formula One cars – we’ll get to those in a minute – and 14 XX models upon which the programme is based. Client confirmation was received well back in mid-December, while the cars and equipment was freighted by sea in early January. And even then, customs and excise permits can take well over seven days.