Porsche is on the cusp of revealing its updated Panamera, the full-sized luxury hatchback and estate that tops Porsche’s passenger car range. The new model has already gone on to break a class Nürburgring lap record, and we’re expecting a surprise or two to be found under the bonnet, so until the full reveal happens in the next few days, here’s what we know about Porsche’s latest Panamera.

Kicking off the new model’s launch is the news that Porsche test driver Lars Kern has lapped a prototype Panamera around the Nürburgring Nordschliefe in 7:29.81, a 13-second improvement compared to the previous model. While the prototype did wear a particularly sticky set of Michelin Pilot Sport Cup 2 tyres, that doesn’t fully explain the scale of the time difference, leading to speculation that Porsche has been to work under the Panamera’s skin

No official details have yet been disclosed, but there have been rumours circulating of a more potent range-topping Turbo S E-Hybrid model to rival AMG’s upcoming 800bhp GT four-door plug-in hybrid flagship. The increase in performance will likely be driven from improvements to the powertrain’s electric components rather than any changes to the V8 petrol engine, possibly including a more powerful motor, inverters or more efficient batteries.

What we can comment on are the subtle visual changes Porsche plans on applying to the Panamera and Panamera Sport Turismo. First spied last year, it looks like Turbo and Turbo S E-hybrid models will feature a new, more open front bumper, with fresh daytime running lights and headlights. All three styling derivatives are expected to be updated, including the standard body Panamera 4 and 4S, the aforementioned Turbo models, and the GTS, which shares its bespoke design with the SportDesign styling option package available on lesser models.

At the rear, the Panamera’s light bar is now thicker and more defined, similar in principle to the updated Macan’s rear light treatment, but otherwise the car should maintain its chunky, but still sophisticated and expensive-looking, aesthetic. The lower rear bumper is also due for a slight change, with subtly reshaped exhaust outlets.

As the current-generation Panamera is now up to full strength model-wise, updates should spread right across the range, including the Sport Turismo and long wheelbase Executive model sold in other markets.

Although the Panamera will still top Porsche’s passenger car range, it’s the all-electric Taycan that continues to hog the limelight, with a long waiting list and its dramatic concept car looks. The Taycan is physically smaller, not to mention less varied in its derivatives, but the updated Panamera will have to feature some pretty special updates to compete for attention against its new EV sibling. 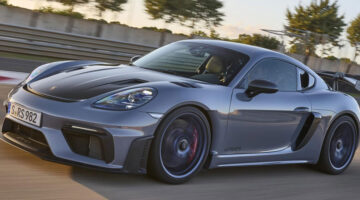 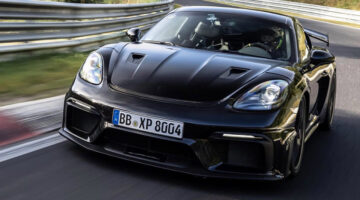